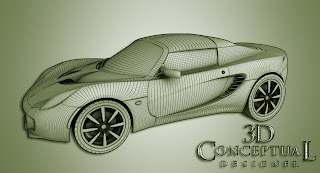 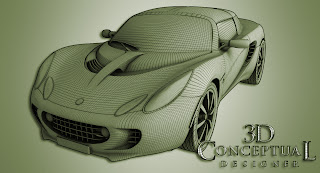 A 3/4 front view of the Lotus I made from scratch. 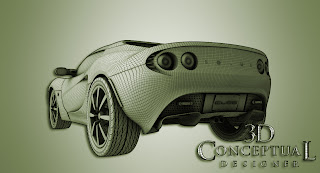 A Worms eye view from the back showing 6the belly-pan and exhaust heat shields drilled out on this Elise. 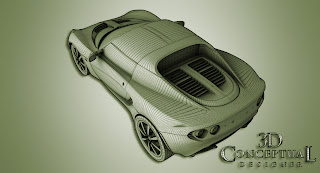 A 3/4 overhead view of the model I built. 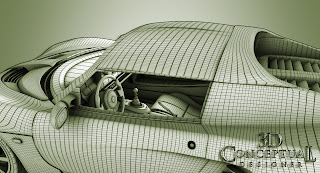 I hid the glass object to show a 3/4 interior I made for the car as well. This has door sills so the doors can be opened, but I did not do all the interior parts at the time for the pitch. 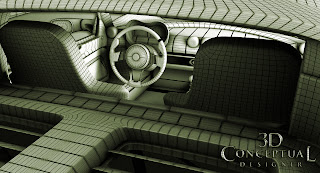 Looking at the IP from the the back window[ hidden] 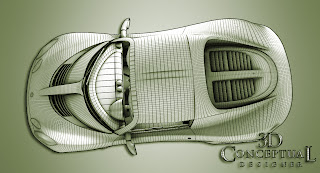 An almost top view with windows out showing the dash details. 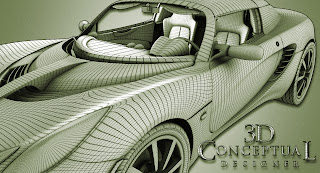 A closer shot of the virtual Lotus Elise I made for the Adverting campaign.


Today in PART II on the 3D virtual car model I built while at The Cimarron Group back in 2004 for Lotus Motors, I have some polygon ambient renders to post, to show off the geometry itself as to how I built each part.

I built this asset out to assist the Corporate Advertising Division at The Cimarron Group to get the Lotus Account for the USA lauch of the car, and since the cars were not in the states I was forced to look online to find photos of this new car.

I found a great set from the LA Auto show and I also found a blueprint so I began to construct the car part by part, starting as trained at Art Center with the main speed form or body mass.

This was the first 3D car I built from scratch, and I have built many since.

I will have added posts covering more of the process for certain challenges for this car.

Eventually we got to get the actual cars here and I got a test drive with the factory technician on Mulholland Drive out here in SoCal, and that was exhilarating to say the least.