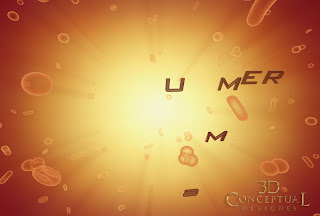 Frame 10 as the letters are stirred around to form the final title for this Aeon Flux 3D animated card I designed back in 2005. 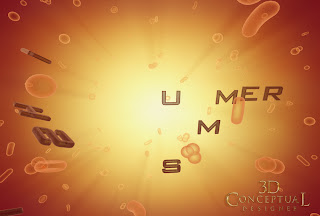 Frame 15 the letters are forming the words.... 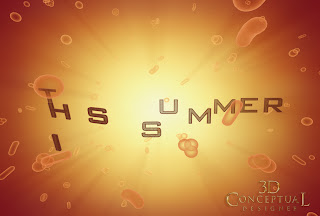 Frame 20 they are close to set for the This Summer Card for Aeon Flux. 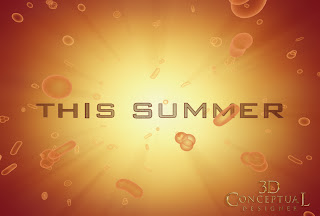 The type is set and the camera is l slowing moving into the frame.... 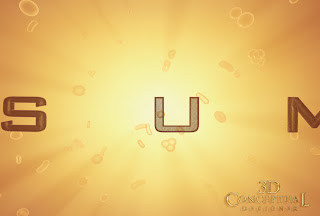 The type fly's past camera as the back light begins to flash out to a bright[ almost white-out] of the frame. 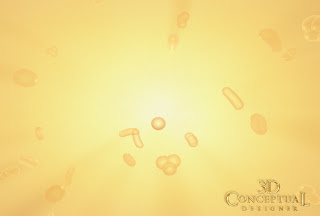 The end frame clean w/o any Aeon Flux type left in. 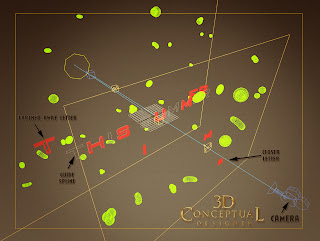 Here is a screen grab of the scene showing the various layers back in Z-Depth 3D space where I place each letter at a different distance from the camera, and then scaled them to appear the same size[ camera trick].

I did quite a few animated Title Cards in 3D for the Motion Graphics guys at The Cimarron Group during my 6 years with the company, with a few stragglers after my departure, as a freelancer the last few years as well, so I was seasoned enough for the task at hand for Aeon Flux the live action film adaptation of the MTV animated series form the 90's.

I was very familiar with Aeon Flux since we used Peter Chung to design out the main Characters for The Phantom 2040, an animated series I worked on in the 90s as well, but for this spot we wanted to show off a molecular-microscopic look, inspired by the amazing titles for the first Hollow Man film with a mixed up petri dish with type inside.

To accomplish the various levels of blur in the scene I designed the card to "land' in place at a variety of levels so the camera would naturally adjust the depth of field DOF, for each letter accentuating the 3D nature of these constantly moving title cards.

For today's part one we see a simple SUMMER' card I did as the first test look, and proceeded to do all 10 cards for the various TV spots for the film advertising work. A fun time for sure.

Cheers, THOM
Posted by 3Dconceptualdesigner at 11:51 AM