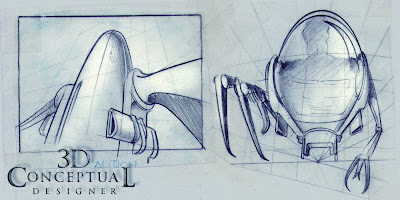 All views were extreme views, with fish eye and strong perspective in birdseye and worms eye shots as seen in these two mini board sketches. 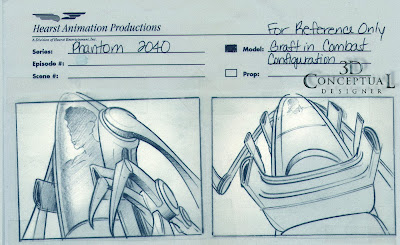 The animators were having a difficult time posing Graft correctly at first so I did a dozen poses. 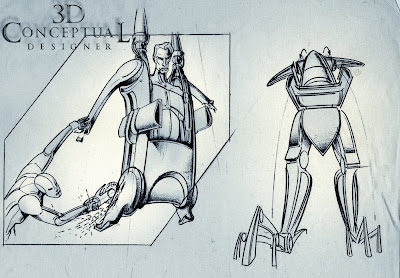 Here are some sketches used in vertical pans, one with the B.I.O.T. cutting Graft out from his damaged B.I.O.T. Outer body. 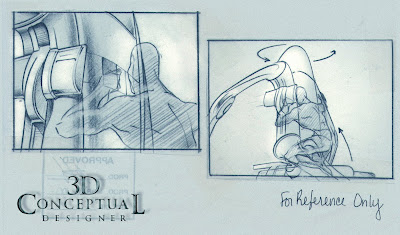 Here are the two frames from when The Phantom sets a bomb under the arm of one of Grafts pincers. These little boards are 2"x3" velum overlays for the Storyboards, but were also inked for a style sheet as well for reference.

In this 69th post on "The Phantom 2040" television Animation Series I have posted some of the overlay sketches I did for the storyboards to get the main character Graft correct in the action shots.

These sketches done were of when he was in the specif mode of "Urban Combat". This was one of a few forms he took that were giant 3 person tall fighting B.I.O.T. robots that would be a huge challenge for The Phantom. It turned out that the animators needed a lot of help with this one so I jumped in and di a couple dozen views to help out.

Once the boards were done I took the little overlays I created and sent to Caesar in Character inking to ink over and create a style page for Graft for the future shows. This helped out a lot so we did this with a few more characters and especially vehicles designs I did.
Cheers, THOM
Posted by 3Dconceptualdesigner at 9:39 AM