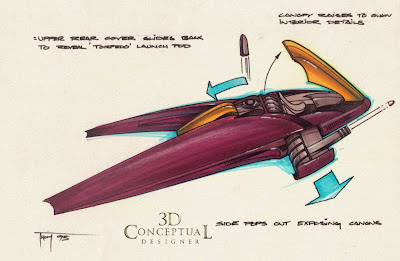 The Phantoms Flying Wing, opened up for clarity of design. 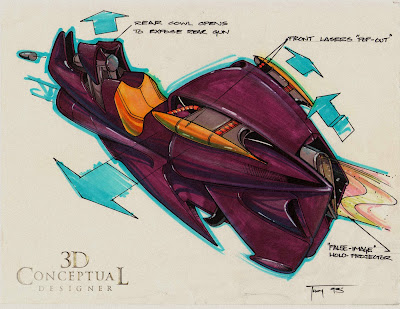 The Hyper-Cycle became the most used vehicle and it was the shortest design time. It started as a one show item and became the main transport.

In this twelfth part on the Television Animated show I worked on in the early 90's The Phantom 2o4o. This part focuses on the Color Keys for the three main Phantom Modes of Transportation.

We have the vintage for 2040 late 90's Mustang HERO in full Phantom mode with all guns and cannons armed and out. This was based on the show-car that Ford had in 1991 at the car show and was modified slightly to fit the characters. I also have the flying wing and his hyper-cycle color keys as well.

The Flying wing originally was to be his main transport in the show but it was only used in one or tow episodes. I fully developed the vehicle and will post the original opening title sequence is storyboard which focuses on the wing and the hidden skull images in it's design.
Cheers, THOM
Posted by 3Dconceptualdesigner at 10:42 AM