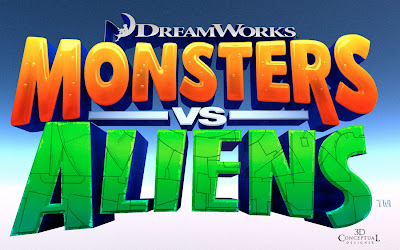 The Final Finished Theatrical AV Logo used in the Trailer.

A Logo that Pays homage to the old Looney Tunes Red Monster.

An concept with the energy of the logo in the vs as a bright red light.

This Design combined the Bob "blob" material and a contemporary metal look.

This logo got a bit more playful with the introduction of the Robot and the eye.

Using the fur in a more subtle manner with the green Alien color lighting the scene.

I tilted each letter in Monsters to get a fun overlap over the glass Alien font.

Very crazy hair was not too legible but it was fun to experiment with.


In this part on Dreamworks 3D animated feature, Monsters vs. Aliens, I focus on logo designs. We did logo explorations very early on for the feature that was done through the Theatrical Print Division. We explored using the "blob" material that Bob is made out of as a part of the logo, as well as solutions for the alien look of the logo. We went fun and furry with some logos as well.

I did about fifty logos in 2007, and the project went away for two years. Once it returned, it was now in the Theatrical AV Division for the trailer and BLT had designed the final logo used, but I needed to build it again for the Stereoscopic trailers we were producing, so I threw that in here as well as an AV finish. You will seee this logo at the front of my Animation Demo Reel linked up on the top right.