One of the first ideas from Calvin Sumler that helped bring in the work, a wall of lighted text.

An architectural metal grate idea from Joseph Stamper with light beams eliminating from behind.

A beautiful crystal version of the logo for Joseph Stamper.

A logo built from the scaffolding from the film that was to be filled with all the women done for Joseph Stamper as well.

A logo built from steamer trunks shaped like letters with Danial Day Lewis as the "i" in Nine, done for Chris A. Hawkins.

The logo built from a row of Brownstones for Chris A. Hawkins as well. [ my favorite!]

A "Neon" nine done for Chris A. Hawkins. 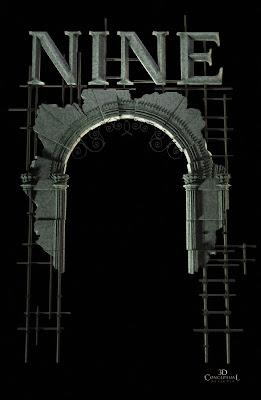 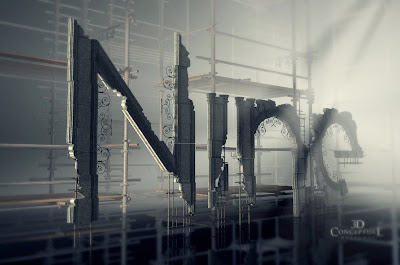 A logo made from architectural elements and stage props for Joseph Stamper.


The successful Broadway Play 'Nine" was made into a feature film last year, and I was tasked with some concepts using 3D to illustrate the main title logo.

What a fun exploration to match the lighting and beautiful sets from the film in the logo., I had a great time on this one. I did some made from stage props and scaffolding, and more as architectural elements as well. I even did a row of NY Brownstones spelling out NINE as was done years earlier for Sin City[ See other Post].

Cheers, THOM
Posted by 3Dconceptualdesigner at 11:28 AM