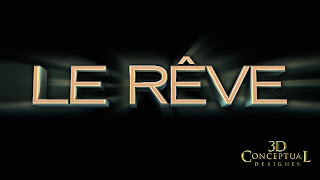 This Le Rêve test frame did not have the paint stroke for the leg in the "R"  but I used it until we had a clean asset as a placeholder to get the lighting ready for my run on the 3D logo designs. 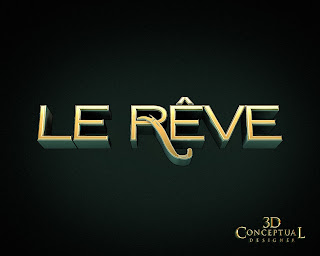 A double plate 3D Logo gold with a nice aqua green under-light for this version. 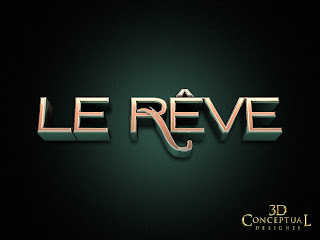 For this Le Rêve 3D Logo I went with a peach color gel lighting that faded so the white-gold face would show thru as the colored light faded back[] attenuation ]. This is the version we used for Motion Graphics. 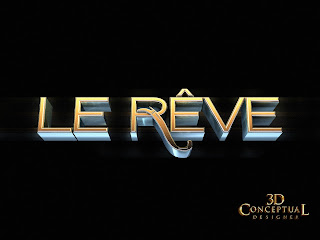 Gold on Silver for this one with caustics active so you get the nice little hot spots thru out the design of this Le Reve 3D Logo. 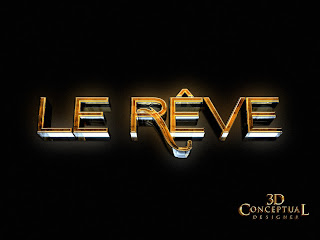 This 3D Logo incorporates a double glass set-up with caustic gets all the internal refractions. I did gold glass over clear for this Le Rêve Logo. 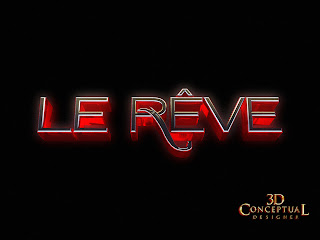 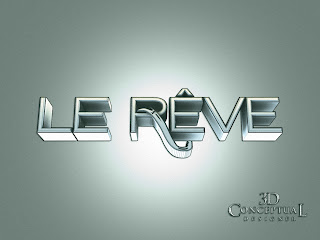 A shot of the simple beveled and extruded two plate geometry.


With 3D Logo creation, you sometimes start from scratch, and other times you are given a final vector design to make three dimensional, and with this project for the LasVegas Wynn Casinos it was the latter.

They had a design and wanted to see it in 3D, so I built out the file to match thier design in 2D and created the 3D file to do some 3D looks on. Once it is set up I did a few quick tests, and then it was a matter of creating the set of looks.

For this project I did half a dozen looks in a locked view a bit below the logo looking up. At the time, they wnated to go with a strain on view, but they saw the lowered camera showed off the 3D design better, so I went with that for all alternate looks.

The colors were mostly in the warm areas, with reds, golds, pinks, and yellows, and we did a cool backlight with a bit of blue and green reflecting up.

Some were metal some glass,and some a combination. I fun project that was used in both Print and Motion Graphics applications as well as Web.