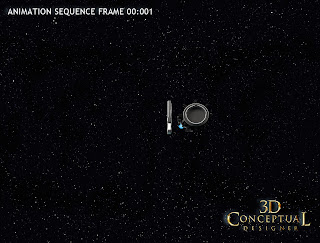 Frame One in the Lightsaber move done for the Title of Fanboys was on the butt end of the saber. 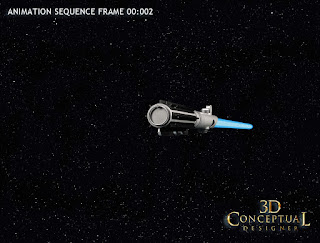 It is a whip spin move so we are at 22 degrees in one frame already. 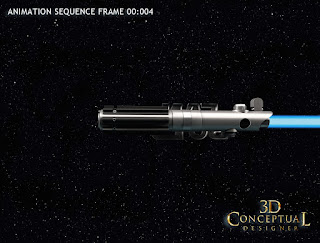 In this shot from the back you can see I hollowed out the test for Fanboys:
Reason was we had neon behind it at one point[ removed] 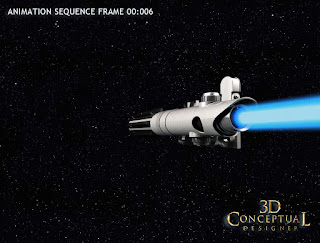 The light volumetric whips past camera wiping it... 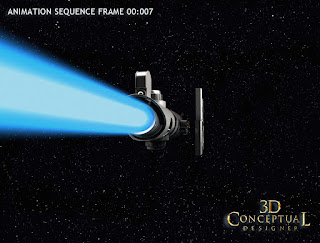 The finish of the wipe move. NOTE: These are RAW rendered frames I am showing with no post yet. The final was Jazzed up as all MGFX are in post as seen in my reel here. 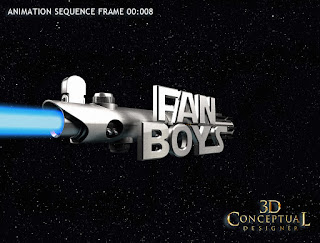 Eight frames in is 1/3 a second, typical for a title slam in MGFX work and we are revealing the logo now less than 1/3 a second into the move. 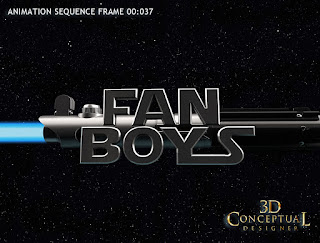 The Logo seated has a slow continuation of the move as a radial drift. 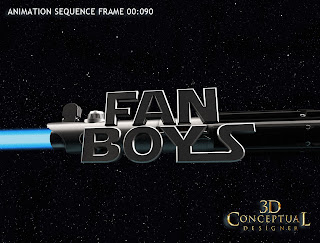 The final frame as the title has rotated clockwise about 2 degrees over the long last 2 seconds, so all the big motion is in about 10 frames, with 80 frames of subtle support. 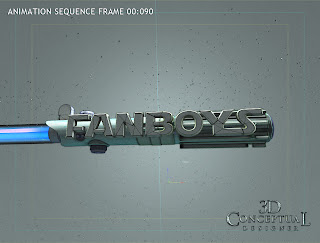 Here is an ambient render with a screen-capture showing the 3D stars and light placement inside the sable blade.


In this my second posting for Fanboys, I am covering the light saber 3D asset from the main Title I created for the film and the Theatrical Advertising work.

The saber move was picked for this job, as it was not a high budget gig when we got it in back in 2004, but it dragged out a few years in release limbo, so we had some time. I had built out the Luke Saber for the Trilogy packaging I did for the Home Entertainment back in 03' so we reused it for this film.

I rendered out a full 3D move including the stars. Most MGFX would use only 2D stars mapped in the background, but I chose to build out a 3D star field so we could get parallax with the stars as this was a 90 degree whip pan move and 3D stars would actually be seen as such in a larger move like this so I built out a set and scattered about 10 thousand out there for the shots.

I also filled in the background with added 2D stars as well that would not move the same, but created a multi-plane animation feel to the motion.

So what started as a SD[ Standard Definition] TV spot title treatment for the Motion Graphics team, went on up to HD res, and finally to 3K Film resolution for the finish.

The 3D Animation move is shown in my reel about 75% of the way in as seen here.

You can view PART I covering a misdirection campaign we did with Motion Graphics earlier on here.


Cheers, THOM
Posted by 3Dconceptualdesigner at 11:56 AM