Here is the final TNT "Da' Bomb" Emoticon I designed, built, and animated in 3D for this mini Icon from back in 2007.

Here is the Polygon wire-frame showing the subdivided 3D Build.

The Low Resolution view of the TNT stack.

An exploded parts shot of the little build for this prop. A bit of "Toony" style added to the shapes. 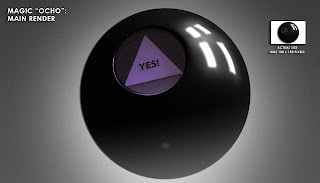 The Final Render of the Magic "Ocho" fortune ball. 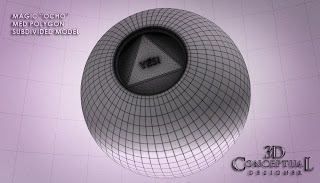 The smoothed mesh is a simple modified primitive. 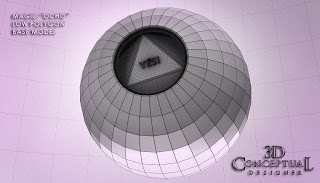 The base Polygon Mesh[ No Subdivision Added] 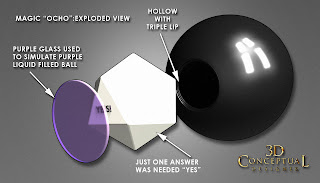 An exploded view of the three parts in this simple animated Icon.


In this second part in my series of the quick work I had to create some 3D Emoticons for use on a clients custom built website, I will cover two more Icons I created and animated for the Interactive Division at The Cimarron Group from back in 2007 of a simple Magic Ocho Ball, and a little TNT bundle that blows up with cartoon flags.

I worked in Television animation for a number of years so I was familiar with creating toon styled characters, and these little quick 3D Icons were a fun project to use that skill set on again, as the bulk of my work at the time was 3D Logos and Photoreal 3D Illustrations, so a fun little animated object like these was a nice change up.

I delivered 60 frames of animation for each of the four Emoticons I designed and Animated in 3D for this little gig. Fun and fast!

You can look at PART I here.

Cheers, THOM
Posted by 3Dconceptualdesigner at 10:19 AM