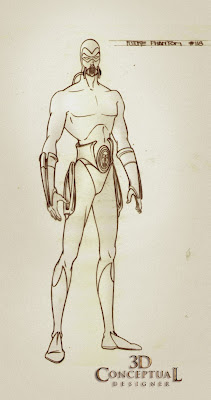 Here is the 26th Phantom that visits Kit in 2040 with a respirator mask to breath with as part of his outfit.

I did an overlay over Kit to get the designs for the belt and cuff just a generation back in design for his father as The Phantom.[ 22nd] 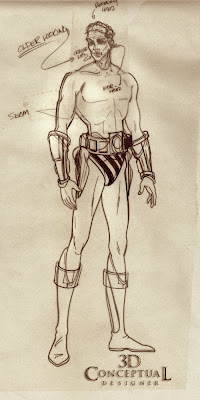 This one was FUN! I really old phantom from a few generations back[ not the striped shorts]

Here is a sketch for Kit where I revised the sidearms from what another artist had done[ a bit too fat].

In this 68th post on "The Phantom 2040" television Animation Series I have posted some of the overlay sketches I worked out for various other Phantoms for the show that I based on the design done a year earlier by Peter Chung, who did our main character line up before I came on board.

In Phantom 2040 , Kit Walker is the 23rd Phantom in a long line of them, so I did a few past Phantoms, Like his father, and great great grandfather. I also had a Future Phantom visit with a respirator attachment as the air was unbreathable in the future in the series since the "Ghost Jungle" was in danger by Maximum Inc.

The Television Series was an amazing experience to help develop the look for the whole world in the Phantom 2040. I have over 400 images uploaded now here on my design blog, that I have scanned and xeroxed, you can search via the Google Search bar up top, or use the Phantom 2040 Tag to the right.
Cheers, THOM
Posted by 3Dconceptualdesigner at 10:21 AM