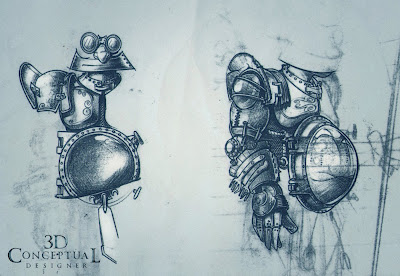 Rhythm and Hues Detailing sketch of the host's armor. 1995 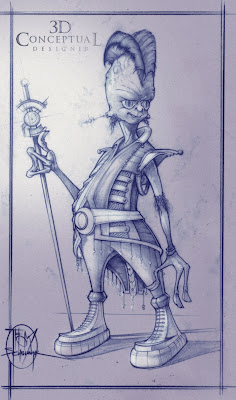 Both were for Theme Park attractions with one as a live action actor, and a CGI 3D character , and a full Anamatronic for the Rhythm and Hues Vegas attraction Race to Atlantis" in which I was the storyboard designer for the 3D move, and this was a small side piece I did in helping Ed Lee in the design department.
The other character was for WDI, an Alien for Tokyo Disney, done for Creative Director Eddie Sotto, for an attraction concept, and this was a PT Barnum snake Oil salesman from space. FUN!
Cheers, THOM

As a P.S. I was out sick so no post yesterday.
Posted by 3Dconceptualdesigner at 4:55 PM