Here is a the group shot set up for a 3--Sheet billboard layout for Tiny House Nation. 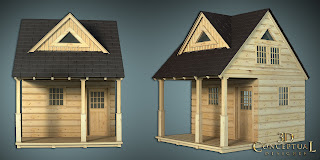 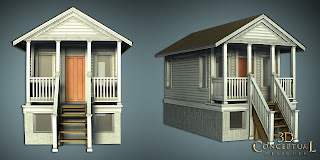 This Tiny House was called, "The Cape" Clapboard siding off white paint. 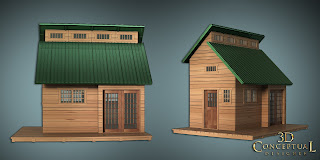 This next design, "The Cedar Neo", was designed as a newer styled tin roofed cabin with a steep pitched roof-line 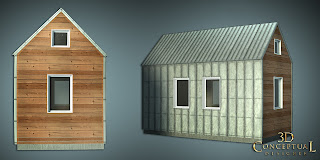 This Tiny House., "The Tin Box", was a galvanized Industrial look s similar to the finish on a shipping container with multiple panels. 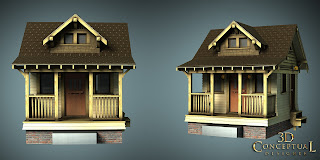 This tiny house was a re-sue, as it is a direct lift form my personal collection, a Arts and Crafts era Grand Craftsman home I did as seen here. 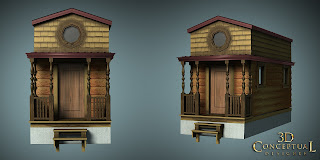 I called this tiny home, "The Gypsy" as the long design felt like an Old fashioned Gypsy Cart a bit. 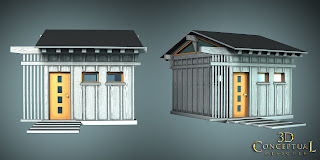 A fun Tiny House I did some MCM[ Mid-Century-Modern] accents, from the star-door-knob and the exposed beams on the low angled roof. 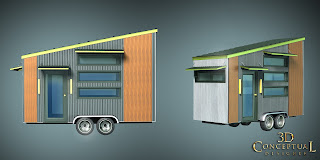 This Tiny House was called, "The Mod-Tin Roller", created as a portable design as they wanted at least one on wheels. 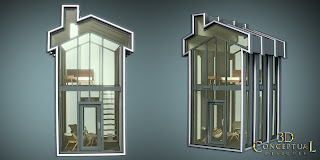 This last tiny home was called "The Outliner", it's  a highly stylized design with an icon home shape as the outside framing shape, created with a all of glass for the icon shaped-walls.

Today I am reviewing some 'virtual' 3D Tiny Houses I created for Key Art presentations for the FYI TV series, Tiny House Nation, back in the Spring of 2015.

I regularly do virtual photo-shoot work like this for architecture, and since the finished image is fully owned by the client as it is a unique creation , they own all rights to the final images, in contrast to the contracts for stock photography use, sot they came to me.

3D Design also gave the client, full control over each tiny house design and view, so they got exactly what they wanted.

I built out a range of styles and rendered two views for the larger versions that were used in the foreground heavy designs, and I also did a few group shots for filling in background dominant designs as the 3-sheet billboards were.

I also re-used a personal model to add one more to their lot of a playhouse I designed a while back, that is doubling as a tiny house.

From 3D Concept design, 3D build, 3D texture and lighting to final 3D Images, this was a fun one day gig.

Cheers, THOM
Posted by 3Dconceptualdesigner at 10:28 AM