Project Review: 3D Logo exploration for: X-Men Days of Future Past 2013- PART I 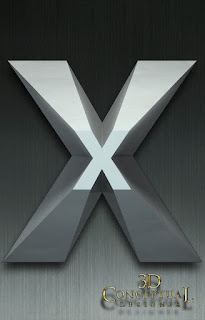 For round one exploration on X-Men:Days of Future Part, I did a big X as seen in the prior film finishes I worked on, and did a giant bevel look to move away from the smaller bevels found in the early work. A Brushed steel with some cool reflection tones to match the earlier versions was added to tie this new look over. This was a teaser image. 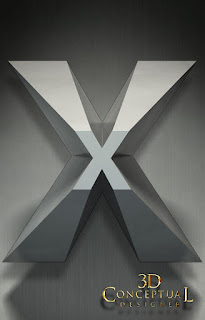 Here I opened up the 3D Lighting more and warmed up the reflections and ambient. I also rendered with the background plate accepting big 3D shadows for this round to make it stand off more. 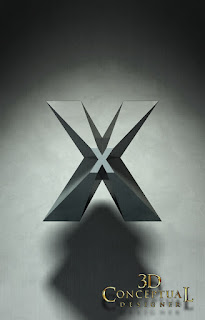 A real 3D cyclorama with some distressed metal texturing was added as I pulled way back from the X for a longer shot. 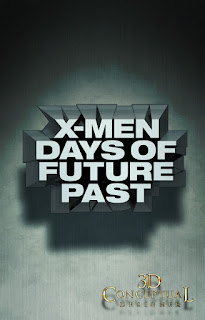 The client set-up the type block and wanted the same super bevel added to the title so it was a large hexagonal like block of type. a fun alternate look IMO. 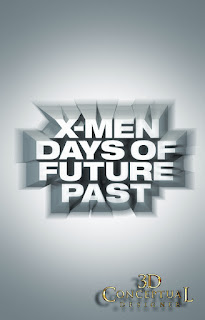 For the alt we moved away from metal textures and did a white on white in low light looks with minimal textures and bright blown out high-lights, to add a dream like feel to it. 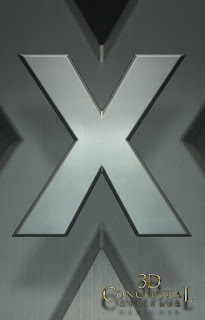 I also was asked to do a simple 'X' like I did for X-Men 3 only in a portrait proportion vs. landscape. 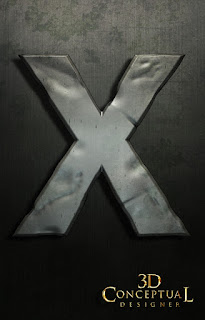 The distressed version of the X was to be a pitch for a Living One Sheet where it flickered between the clean and busted up one. Sparking effects were to be added in the final animation if it went to finish. 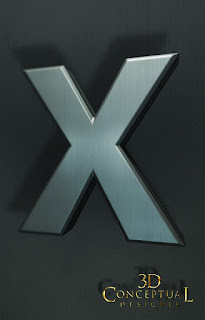 A 3/4 shot of the clean X as an alt. Render with alpha to putt the logo off the backdrop is a typical request and standard with my 3D deliveries if needed. 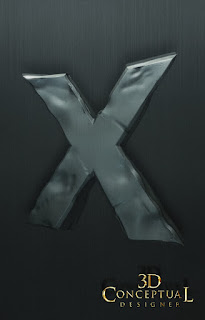 Here is the distressed one at 3/4 showcasing the full twisting and bending each leg in the 'X' under went, not fully seen in the direct front shot.

Project Review
3D Logo exploration for: X-Men Days of Future Past 2013
PART I


Back in May of 2013 I was happy to work on the next installment of the X-Men franchise with another in the Prequel lineup called, X-Men Days of Future Past. I worked on most of the prior X-Men films, from X-Men 2, X-Men 3, and X-Men 4:First Class, and I ended up and finished the X-Men 2 logo as well as the X-Men 3 ones in the past, so I am very familiar with both the franchise itself, as well as the marketing for the prior films.

I am also a super-fan of the films as well, so this was FUN STUFF!

I also finished the final logo for X-Men 5 thru another client We Are Bond in 2014, and here is a link to that finished image found in the trailer a seen here below: 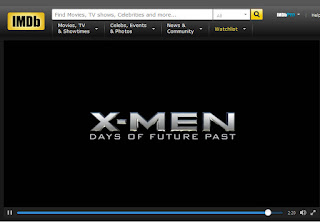 Screen Cap from the Motion Graphics for the Trailer here.

In this PART I posting today, I am covering the first exercise in doing a big "X" and some type. They supplied me with the vector files approved for 3D layout, which is the typical way most clients work with me, though I do lay out type myself, for about 25% of my 3D logo work, most is pre-set from the client end to begin with.

Since this was a time travel genre, I was asked to do before and after concepts and they wanted one Big "X" version to have in clean and dented. I did a few conceptual images based in this direction throughout the project.

I will have another PART II posting for this X-Men work I did in the future, so please enjoy the post.

Cheers,   THOM
Posted by 3Dconceptualdesigner at 11:02 AM