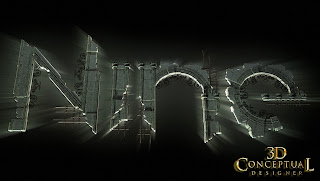 In my first post for the film Nine, you will see parts from this logo there, here is an alt floating at a worms eye view with some volumetric lighting added in post.

I did a series of glass versions for a few type treatments given to me by the great team of Art Directors, and this one sitting on a gloss black backdrop allowed the caustics reflections and refractions to be highlighted.

An aged smooth concrete/metal like texture with a strong warm to cool lighting color environment. We tried all lower-case for a few passes for the film title in 3D for Nine.

Another 3D Glass logo that I built out as hollow to get the brighter edges and internal caustics. I lit this one with a more warm set of lights and reflection maps.

An Old Subway tile feel to this 3D film Logo. I used a procedural shader for this one and the mapping wraps well.

A Single Point Beveled type treatment in severely water damaged concrete. A combo of procedurals and bitmaps for this 3D Logo design pass.

In Part I you will see posted this metal grate logo over a matching window with volumetric lights shooting out, and they liked it enough to render just the 3D virtual iron-work by itself. I went with a more aged copper in the shader for this pass though.

A blocked out version of the 3D Nine Logo for the film,  built out from a vector pass with a good amount of noise on it to feel like a paint stamp.


The successful Broadway Play "Nine" was made into a feature film and today I am posting another set of 3D Logo concepts I built for the Theatrical Print Advertising campaign while I was still the in-house 3D Design Director at The Cimarron Group.

This was a very fun project for many reasons , but mainly because of the team itself. I cannot emphasize enough how important to creativity the team attitude and work environment is to create great work, and with this team, I was stoked.

I did many variations with a wide range of materials and found objects, and was given a full week to build out the various designs that we came up with.

You can view my first post PART I here.