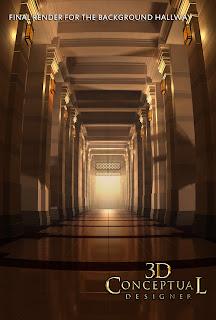 Here is the final Background 3D Render used in the finish for Night at the Museum 1. 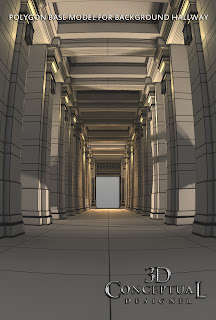 The 3D Scene is straight forward, a virtual replication of a hallway used in the sets from the film. 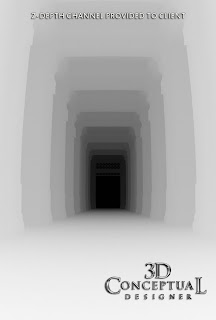 I provide a Z-Depth channel allowing the Art DFIrector to do effects based on distacne from camera as this gives 256 levels of depth for them to blur, desaturated etc. 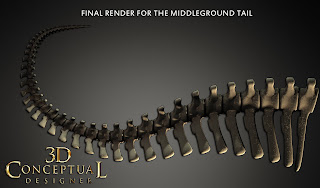 The Middle ground final render of the Dino Tail build all Quad Subdivision. 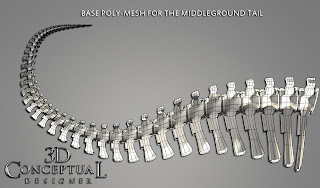 Here is the base Polygon Mesh model with subdivision removed. 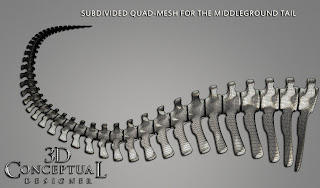 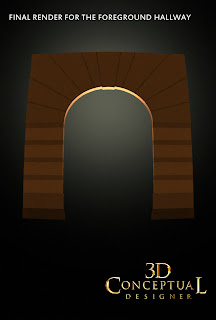 The final render for the foreground archway model. This came in at the last day a change the client made in finishing. 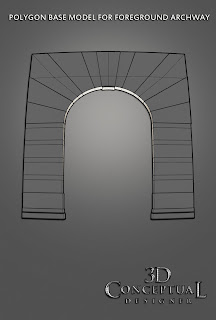 The Archway was a basic block model with modeling grout and blocks.

The final 3D Logo I built for the MGFX and the Print work. 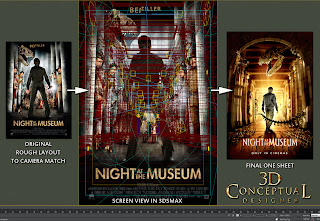 A Screenshot shows the rough layout provided, a screen shot so I could match the angle, and the final poster on the RIGHT.


This is my fourth posting covering the 3D Design, 3D Illustration, and 3D Animation work I performed for the Theatrical Advertising campaign for Night at The Museum[ Parts I and II], and today I am covering the three final renders I did for the One-sheet finish on the first film.

I was asked to take a shot from the film of a hallway, and build out a virtual version that was longer and wider, as they wanted to put a large portion of the cast on the poster so they needed a lot more room, so off I went to create the shot.

As the project progressed they added three more renders, for the first one I built out a Dino Skeleton Tail to put into the Middle Ground of the scene, for the second one, they then decided to create an archway as a foreground device, to stage the poster a bit better so I created this render as well as the third and final render for the poster.And finally I did a 3D Logo.

These were big renders at 4500 x 6650 and took a long time to render, so at the time I had a 10 blade render-farm available so I did a distributed single frame render and threw 12 PC's total on it to get it done over nite.