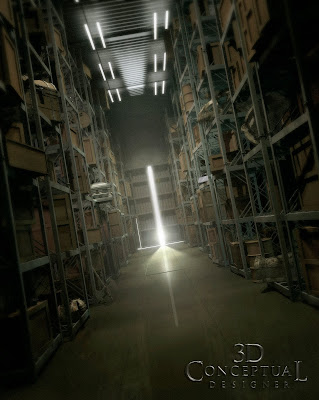 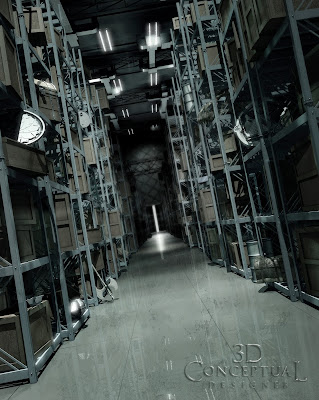 The Room tripled in depth the next round, and went to a cooler color palette. 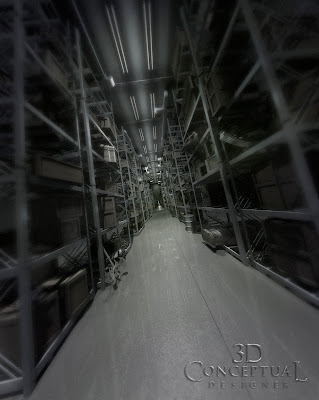 The final Image was near 60 Rows deep and they requested the wide camera view shown.

Back in May of this year, I was given the task of creating a virtual warehouse image to match the look from the SYFY website with the principal photography for the show Warehouse 13, but the angle and size of the what they had photographed was too small to use, and a re shoot was too expensive, so we proposed a 3D Illustration to solve the challenge.

This is a perfect fit for a virtual set extension,or in this case, a full 3D virtual set which is what we ended up doing. I stated with about 10 rows of shelves and set up the comp, but the client wanted it deeper so we tripled it to 30 rows. By the time I finished this work ,the final set was 200MB vs the 12MB first set since we ended with 60+ rows of shelves. It took a while to render to say the least with 12 million faces.

I also did a small test animation for the website portion of the campaign for Warehouse 13, to have an interactive portion using this room as the base. I rendered out a 10 second test move through the space and delivered the 3D Scene files as FBX exports for them as part of the delivery.
Cheers, THOM
Posted by 3Dconceptualdesigner at 1:44 PM