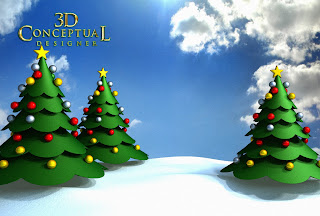 This first pass at the Target: My Little Pony DVD Backplate was a clean render with no animation. 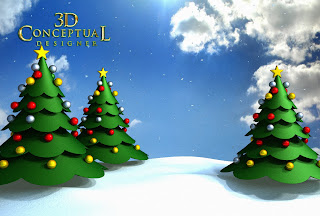 This Back plate had particle FX animated snowflakes that were cut from the project. 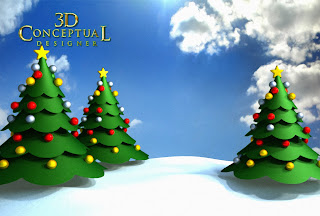 Here I did an effects pass on the first[snow-less] RAW 3D frame, with the Adobe Paint Daubs filter to get a bit closer to a painted feel. 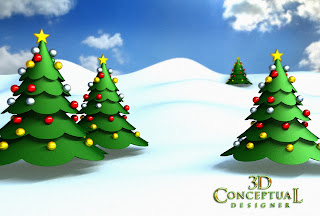 I also did a pass with much more background with the snowfield going farther back with an extra Christmas tree added in. 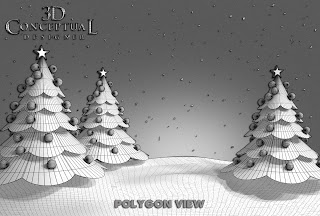 Here is the scene polygon render, a simple set up. 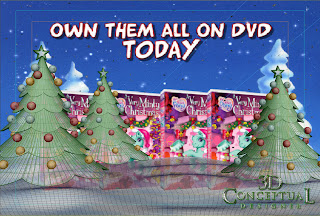 Here is a screen grab showing the alinement with the provided back plate style frame. 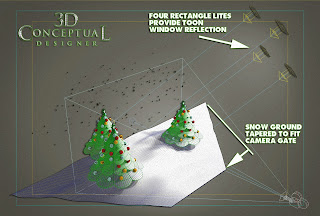 An overhead shot shows the basic set-up with lighting above with the 'toon' window reflection gag again. 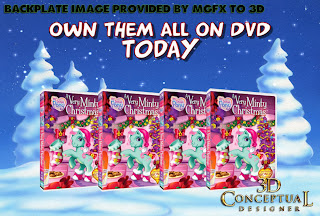 A shot of the style frame as delivered to me to build a back plate for. I usually get a single image and go as I did with this.

Back in 06' I was still full time in-house at The Cimarron Group, an Entertainment Advertising company that I ran a 3D Design Department for, and the Motion Graphics team needed a new backplate for a DVD releae for Target stores, so I was asked to help out.

The image backplate is posted above and what they wanted were Christmas trees that had no snow covering them up, and they wanted to fill them with ornaments to conveyed the Season a bit better.

They also wanted it 'cartoony' , and with my Animation Background, this was a quick Design as I build project that went quickly. Full delivery was in about a half a day with back plates with Z-Depth passes for VFX. A fun and fast small job, typical of many in-and-out jobs I get on a regular basis in advertising.