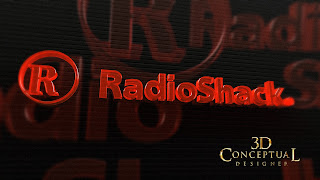 The main shot I first pitched was single layer with full Ruby-Red glass for the main logo on a blurred reflective surface behind it. 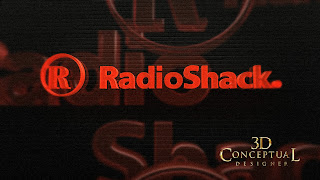 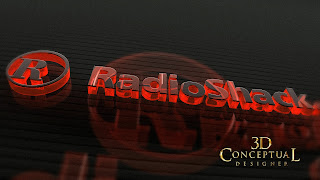 This was the first pass with the metal front plate added for legibility but it was too reflective here and affected legibility. 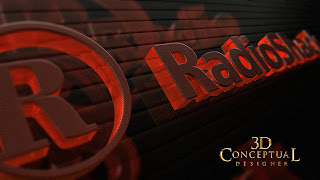 The final renders had a blurred reflection to the face objects metal so they read much easier. 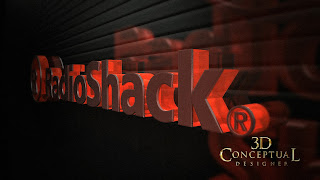 A final frame with a bit of Depth-of-Field[ DOF] added to the camera. 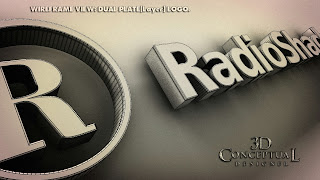 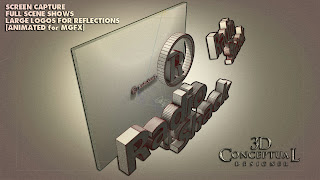 A Screen-cap view shows the large extra logos behind camera that were animated with reactor to tumble thru the scene for the dynamic reflections in the MFGX final.

In the Summer of 2005 with a bit of down time, I was asked to help with a SPEC**** pitch to gain work from a possible client Radio Shack for a set of style frames and a quick little animated Motion Graphics piece.

I found the 3D asset online on a great 2D logo site that has thousands of corporate logos as vectors for jobs like this, as we were doing this in-house as we had not retained Radio Shack as a client as of then.

I built out the file using the vectors that I cleaned up for 3D use and made a multi-layer text object that I rendered out with a set of large logos in red glass[ their color] reflecting in the shot to add movement to the cars without fully animating the logo itself.

A fun half day gig, apart the final aniamtion which took all night to render in glass with reflections and refeactions set high for a good finish.

The job was shelved and never pitched, but fun to experiment with the mark for one of my personal favorite stores.