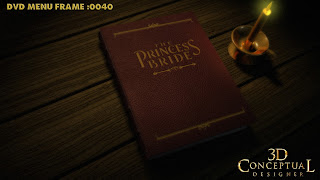 As the 3D Animation fades in from black, we are viewing frame 40 as the light dials up in 3D fro the Princess Bride Special Edition DVD/Blue-Ray Menu I created back in 2006. 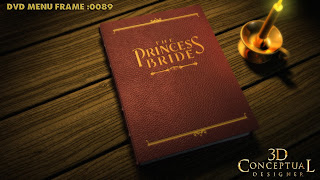 A few second in we are fully lit with a flickering flame. 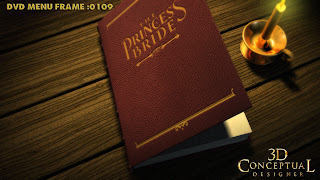 The book cover opens up slowly as the animation continues.... 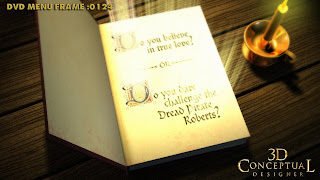 As the book opens I used a volumetric light with the contents page texture map adjusted as a guide to get the light streams lined up with the page for choosing. 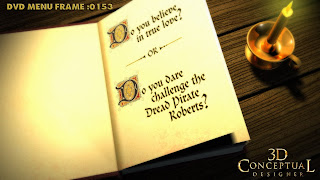 Once the view chooses there are two animations landing on two different sketches of the scene. 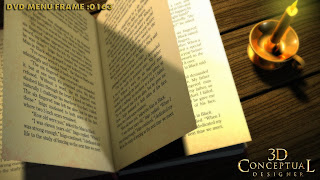 The pages flip quickly but in this still you can see the text for the pages are all the same. 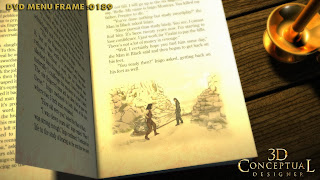 We flip about half a dozen pages and land on the simple sketch... 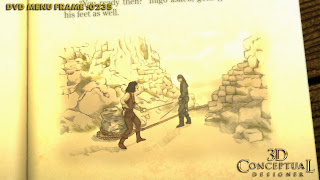 The camera trucks-into frame and rotates to align with the sketch. 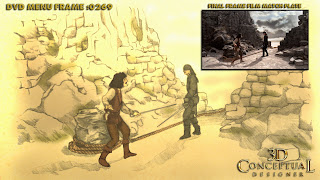 The seated frame lines up with the film , and I was given the target image to use and animated back from he seating pose[ typical practice] 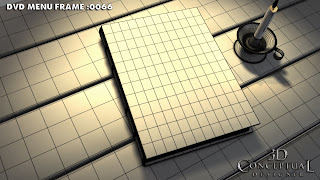 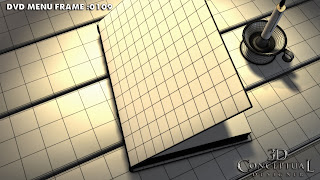 The animated objects from the Princess Bride Menu in wire frame are moving here. 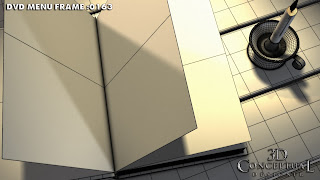 A view of the open pages...as you wish!


One of my regular in-house clients during my six years at The Cimarron Group, was the Home Entertainment DVD Menu Division. I did 3D Illustrations as well as 3D Motion Graphics frames for them to comp into the AE projects they had on a daily basis.

I am a big fan of The Princess Bride, and I was given the opportunity to do an intro 3D scene animation for the Special Edition release and today I cover the framed from that project.

The idea given was an old leather storybook on a wood desk, darkly candle lit, and it would open up to a menu page and you would pick a scene. The pages would then flip and we would go to one of two scenes[ your choice] that were matched to the film frames provided to my 3D Design Department by the team on the 3rd floor.

I mocked up the file and set up the timing first to get the pace right, then I proceeded to create the higher resolution models for the final. Once done I set it up as a fast render[ NOT Photo real] as time as a budget consideration, as it usually is these fast turn around jobs that are indicative in Advertising , and especially in Theatrical work.

A fun project with the first day setting it all up and on day two I rendered out at 960x540 the menu frames for post work that was done within the Home Entertainment group and Art Director Brian Larson.

A fun project with a great team.