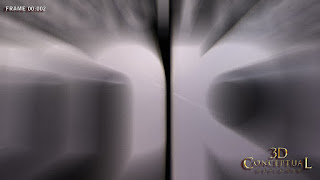 A slammed 3D Title with 3D Motion Blur as rendered and set off to Motion Graphics Pro Tom Kositchotitana. 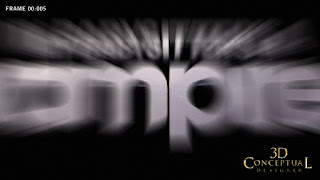 A few more frames into the quick title slam rendered in HD. 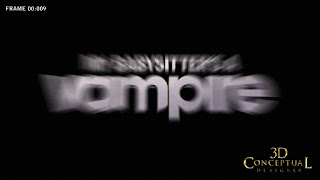 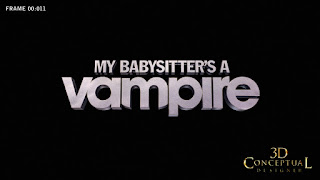 The seated logo before the fangs grow. 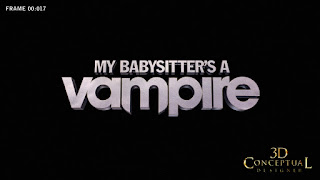 Seven frames after the seating the "M" fangs have grown about 40% out. 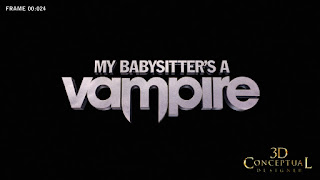 At Frame 24 they are done and completely extended back to the original size, as I made the model with them out and "squished' them down[ reversed the move]. 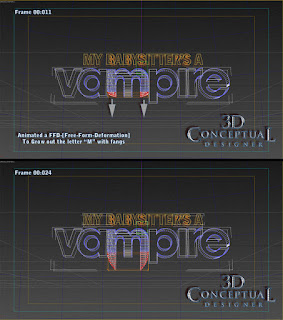 Here is a screen CAP showing the F.F.D.[ Free-Form-Deformation in 3DSmax ] modifier I animated to get the effect needed.


I had worked with Joseph Stamper when we were both in-house at The Cimarron Group for six years together from 2003 to 2006, and we worked on well over a hundred Movie Posters together, so when he moved over to White Spark Creative, he called me in 2011, as well as using fellow ex-Cimarronian' Motion GFX Guru Tom Kositchotitana to help them create and animate a 3D Logo for a new Disney Channel show called My Babysitters a Vampire.

I had finished out over 80 trailer GFX with Tom K at Cimarron over the years, so we had a simple system worked out already with each other on a project of this nature, and this benefited the client as we can get it done very fast, a T-N-T production as we call it[Tom and Thom].

Joseph supplied the client approved 2D Style frame to me, so step one was to match the 2D look in a 3D world as close as I could. Once this was approved we began a few moves on the type and designed out a way to animate the fangs coming out of the base of the letter "M".

I rendered the raw 3D frames and handed them off to Tom K. for the 2D Motion Graphics work, as well as rendering him a few special passes for various parts of the model. I also provided all other 3D cards for the TV spots for the show as well. There was back and fourth until approved and what you see above are the final RAW frames delivered to MGFX.

The Logo was used in 2D Print, as well as MGFX applications for the series.