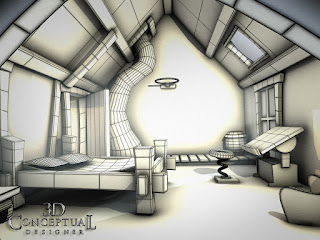 Interior of Tiggers Treehouse
A 3D Blocking Model is a basic representation of a 3D or 2D layout scene. Proportions, staging and design are what are locked in, as all detailing comes much later. 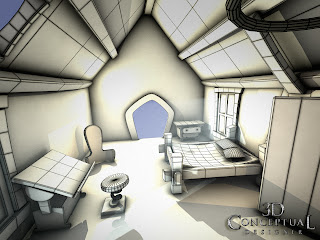 A reverse angle shot shows that the details were not extended to the other side of the room as seen in the faux chair back on the left. 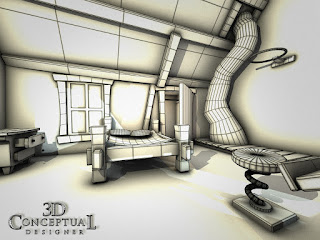 A side view render on the bed side of the room with Tiggers drawing spring "bounce" stool in the foreground. 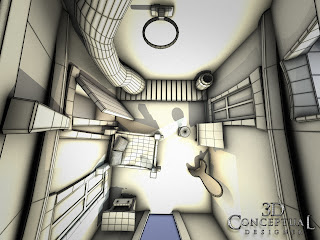 A Birds-Eye extreme down shot to show the whole sic wall full interior set I blocked out for the Tigger tree house for the Development work from 1999. 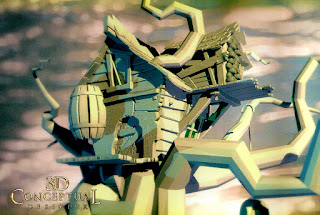 Here is an original render from back in 1999 of the exterior set with what I referred to blocking stage Two: This had more details mocked up like bricks and separate parts for the various boards and such.

I worked in-house at Walt Disney Interactive back from 1996 to 1998 as a 3D Art Director on their big product back then, a multi-disc CD-ROM game[ Nodes and Rails Old Time] called Virtual Magic Kingdom, and once I left DI, I moved across the street to WDI, [Walt Disney Imagineering] as a contractor Imagineer for a few years. However I had at that time a half day commitment from DI to freelance in the mornings, so I was called back to help out with a new game based on Pooh and The Hundred Acre woods called The Lost Family Tree.

I had worked in 2D TV Animation in an Art Director/ Conceptual Designer capacity in the past so I suggested that we block out the entire 100 acre woods locationsmatching each location to the original watercolor and ink backgrounds from the original film first. They all agreed so I was off in blocking out the game.

What you see today is the basic blocking for the main Tigger house with the interior shots and one original exterior rendering frame from 1999 rendered in 3DSmax version 1.

3D Blocking is similar to 2D blocking which I did for all my Phantom 2040 work, as it allows you to lock in the shots with minimal geometry, and once the basic proportions are done, each location can be handed off to a 3D team for final high-rez re-modeling efforts.

In this case DI played with the thought of using the 3D blocking to create 2D layouts grids so the look could be a watercolor original feel and not 3D, but in 1999 this was too costly and the game was shelved for good.

A super fun project as I got to rebuild the main sets from one of my favorite Disney films.

Look for added posts in this series in the future.