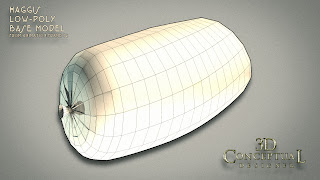 Here is the Low-Poly Base Model I made for the Haggis Roll that fly's into Camera in the Menus on the Blue-Ray Release of SO I Married an Axe Murderer. Here is the Haggis model with a Turbo-Smooth applied. 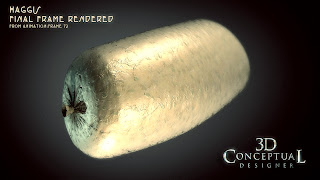 This is a final rendered frame from the Animated Blue Ray Menus I did. 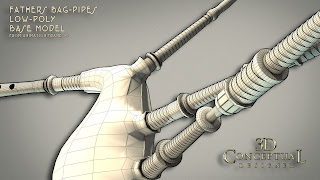 Here is a close-up shot of the Bag Pipes I recreated from the Film's Wedding Sequence with the Mesh-Smoothing OFF. 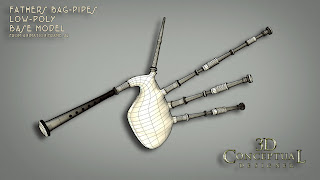 Here is the Frame from Camera 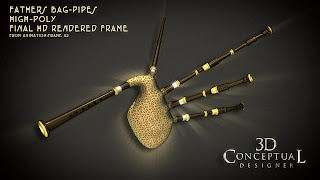 Here is the Final Rendered Frame from the Animation


I regularly do 3D animated Menus for Blue-Ray and DVD releases for the fine team in the Video Home Entertainment Division at The Cimarron Group. The team of Designer/Animators there, consists of, Hesham Morsy, and Brian Larson.

For 'Axe Murderer',  I did the majority of the building and Design for Hesham who went to the Key Arts with the job once built and finalized in 2D in After Effects. As a Mike Myers Super-Fan, I was overjoyed to build out Haggis, Bagpipes and the like.

I was privileged to be able to build out fun stuff, and be able to animate them flying and hitting camera for the 15th Anniversary Release. In todays post, I cover two props, the first posting of a series showing the Bagpipes, and the Haggis. I built both out from screen shots from the film and build out the bagpipes with a high level of detail. It is 95% Sub-D modeled, with the Haggis 100 Sub-Division surfaces.

Look for the Wedding Rings themed to the U.S.S.R,., Martial Arts, and the Plumber, along with a few more items in the next posting for, So I Married an Axe Murderer, posting sometime next week.

Posted by 3Dconceptualdesigner at 5:04 PM