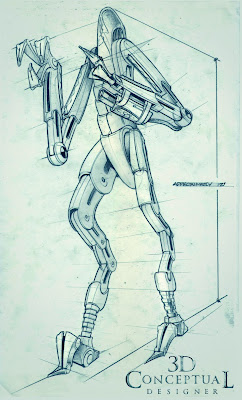 Here is Graft in The Mantis Configuration about 4 times as tall as his main character. 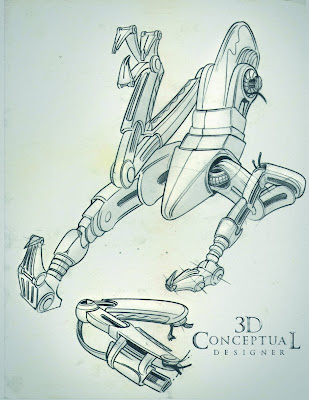 Here we see Graft in the Mantis configuration all busted up by The Phantom 2040, Kit Walker. 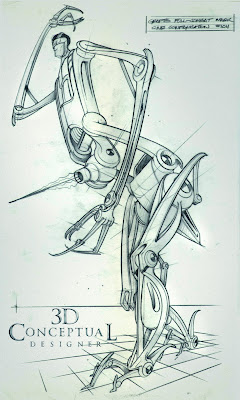 Here is the original design I did for Graft in the Combat mode, what finished had a different center gun section I did an overlay for here. I also did a color key of this one here.

In this, my 77th post on Hearst Animation Productions hit, The Phantom 2040, a television animated show from 1995. Today's Design Blog posting covers a fun configuration that I did for graft of what was called the Mantis. This was a configuration where he started to telescope up to be three times his original height, which already was near nine feet tall, as he was a BIG GUY.

I did a few configurations as grafts torso was all that was left of Grafton[ Graft], so he would be Grafted, or plugged into a body of choice. THe Mantis had some samurai blades on the forearms and bicepts to "cut' the Phantom to bits , if he could catch him. He squeezed like a mantis. I also did a fun design of what he looked like once he got his Iron Ass handed to him by The Phantom and he was all busted up.

The third sketch today is the original deign for the Combat form where I revised the center gun from a single sphere to a double headed laser as seen in a prior posting.

B.I.O.T.[ Biological Robots] , are a fun part of Sci-Fi, that every Industrial Designer , especially if you went to Art Center for Transportation loved to tackle, especially any that changes or transforms into other robots, even more fun to design.

There is a TAG on the list to the RIGHT for other Phantom 2o4o entry's, but you can click this as well.
Cheers, THOM
Posted by 3Dconceptualdesigner at 9:48 AM