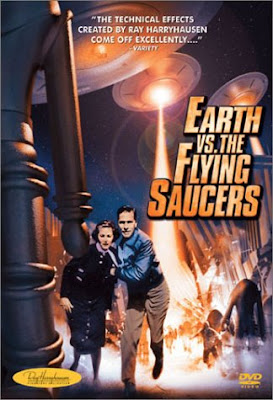 Here is a shot of the FINAL Key Art I helped finish as my first Home Entertainment 3D Illustration final.

I provided extra Flying Saucers for the sides and back illustrations for the Creative Director.

I also did the Robot is multiple views for overlays and adjusting the placement in the final for Earth vs' The Flying Saucers on DVD. 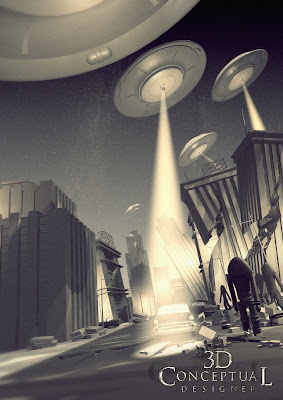 Here is the shot form the camera as it was rendered. the BIG space empty on the front LEFT is filled with the main characters so I purposely did not detailing there as it would be covered up. 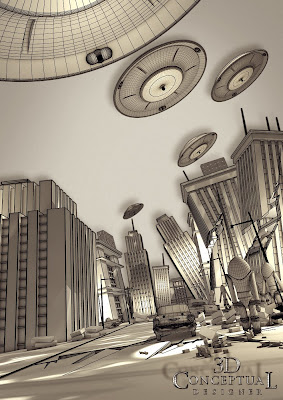 This shows the Sub-D and High Poly modeling I did from the Camera view. Note for Old School 3DS folks I actually was able to put the Bel Air in the shot, Sort of paying Homage to 3DS R4 DOS where I started 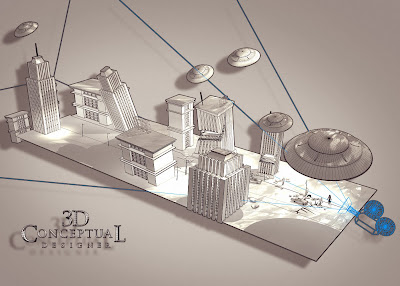 The overhead shot shows how long the set is to get the depth and feel I wanted for the shot, and you cans see the blue camera on the RIGHT.

Almost a decade back now I had my very first Key Art finish for for a DVD cover at BLT for Earth vs' The Flying Saucers, a re-release of the 1956 Classic B-n-W Sci Fi flic.

I built out a street scene for the cover that was to be covered in people fleeing for their lives. I was to do this art in Black and White, and I rendered to have some grain similar to 50's era footage with grain etc.

I built out the city which was straight forward, then I found photo reference using Google, of the Saucer online and built that out using the traditional modeling method, though today I'd go Sub-D with a smooth.

I also built out the blocky robot designs from the film and put them all together for the finals. I rendered some overhead shots to show how my Set-Design and Miniature experience plays into a scene like this. All the detail is up from with blocked in shapes as we go farther back from camera.

Also as with all Home Entertainment jobs , the budgets are tiny so you have to work very quickly. Just over a day of work , plus the final render a month after was all it took to finish this job out.

Posted by 3Dconceptualdesigner at 10:23 AM