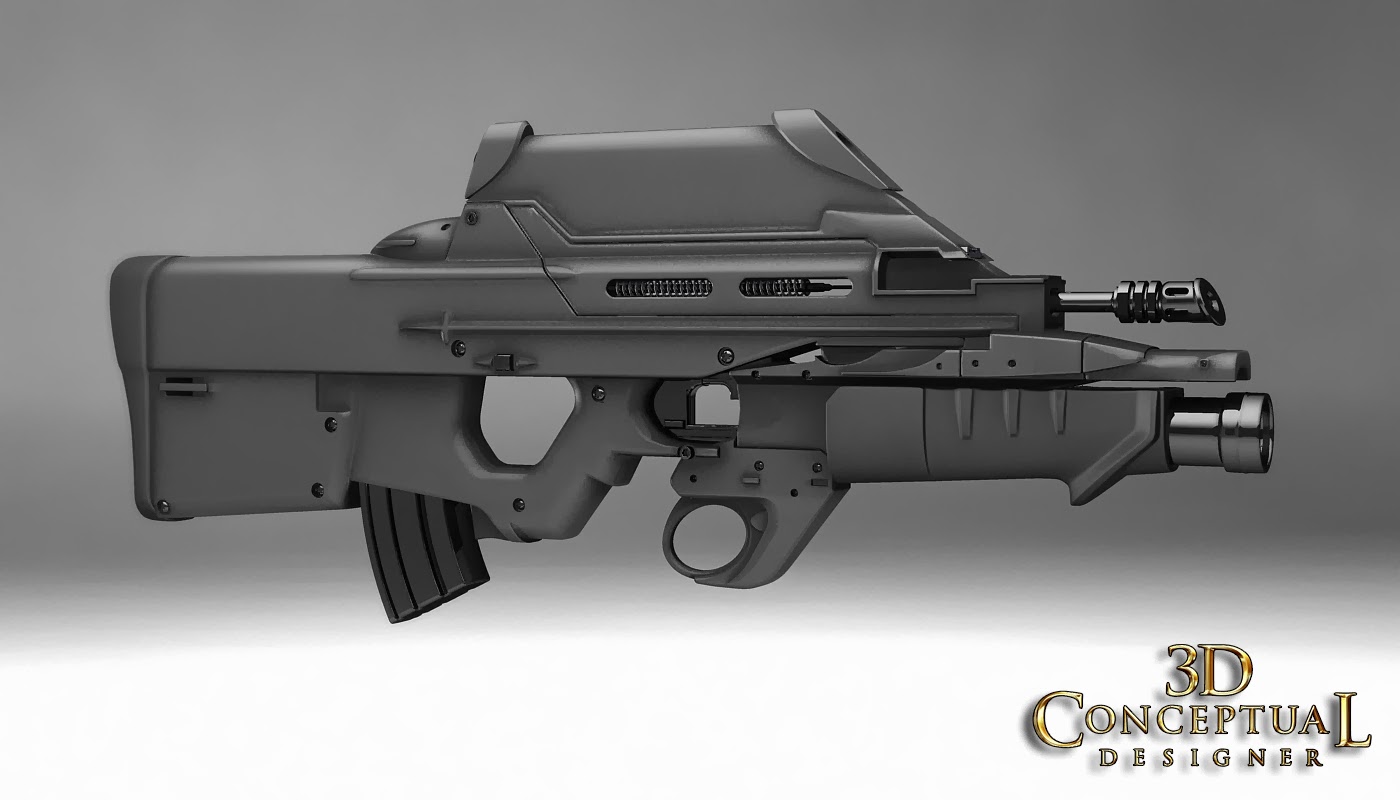 A 3/4 side view of the Splinter Cell firearm 3D model I made for the advertising pitches back in 2005. 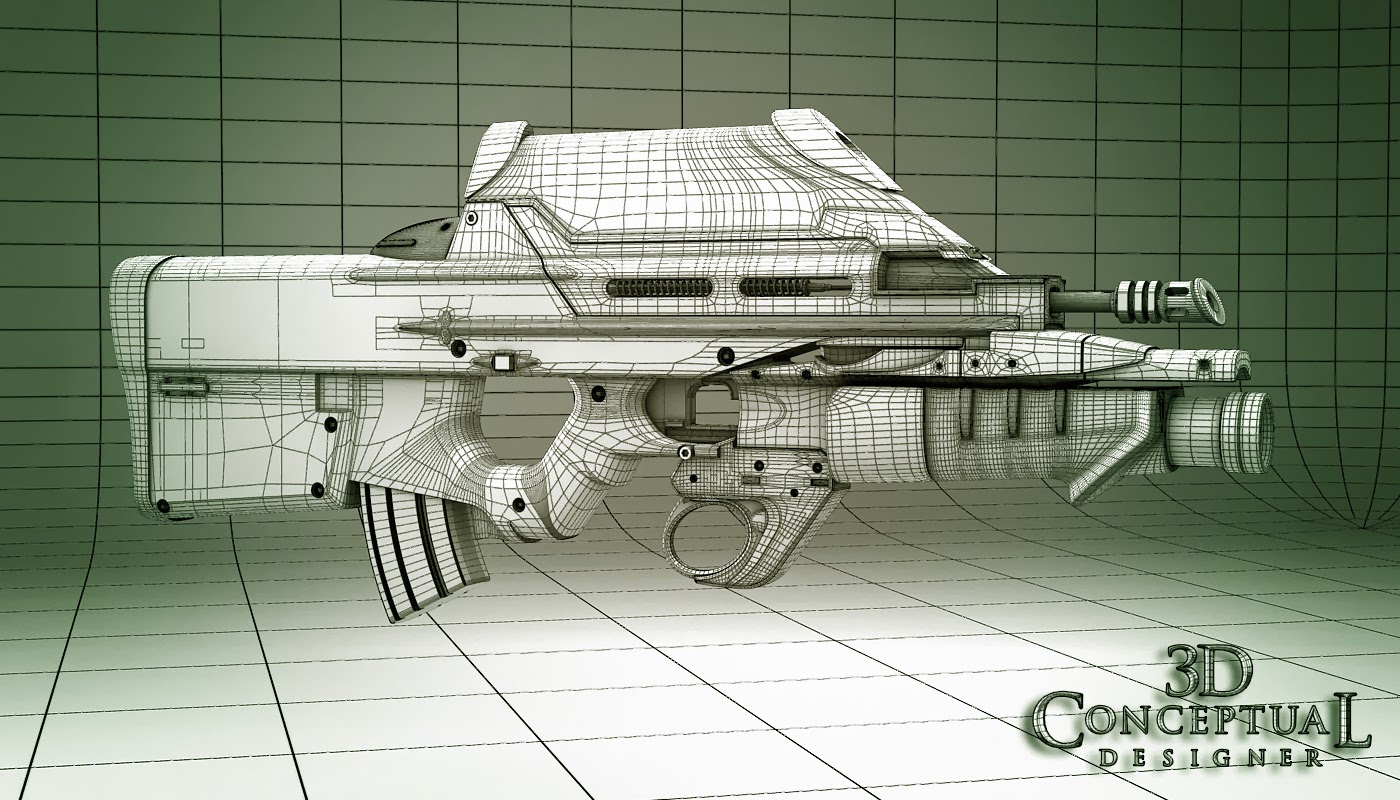 The wire frames shows I did a lot of solid modeling and converted to polys. 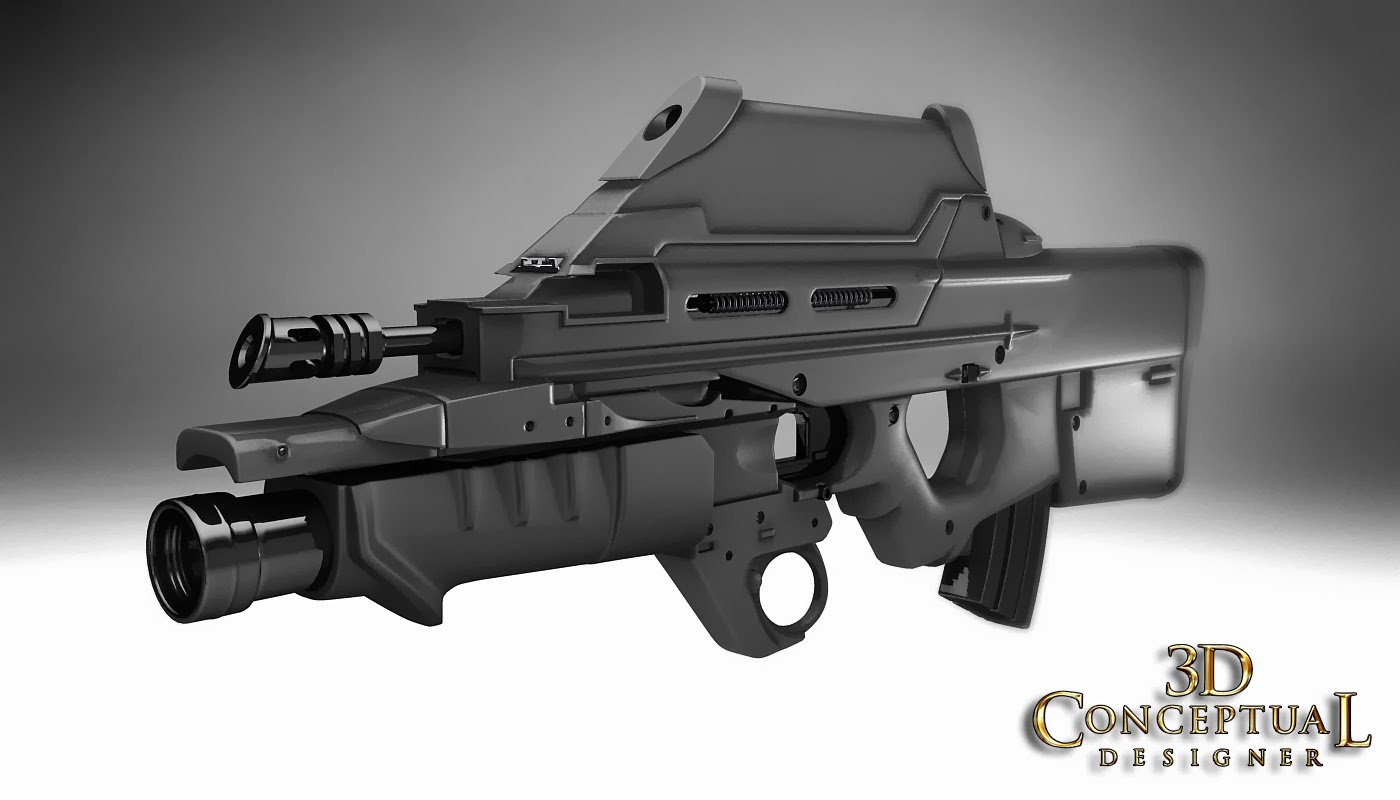 The other side of the rifle showing a bit more for the front in this render. 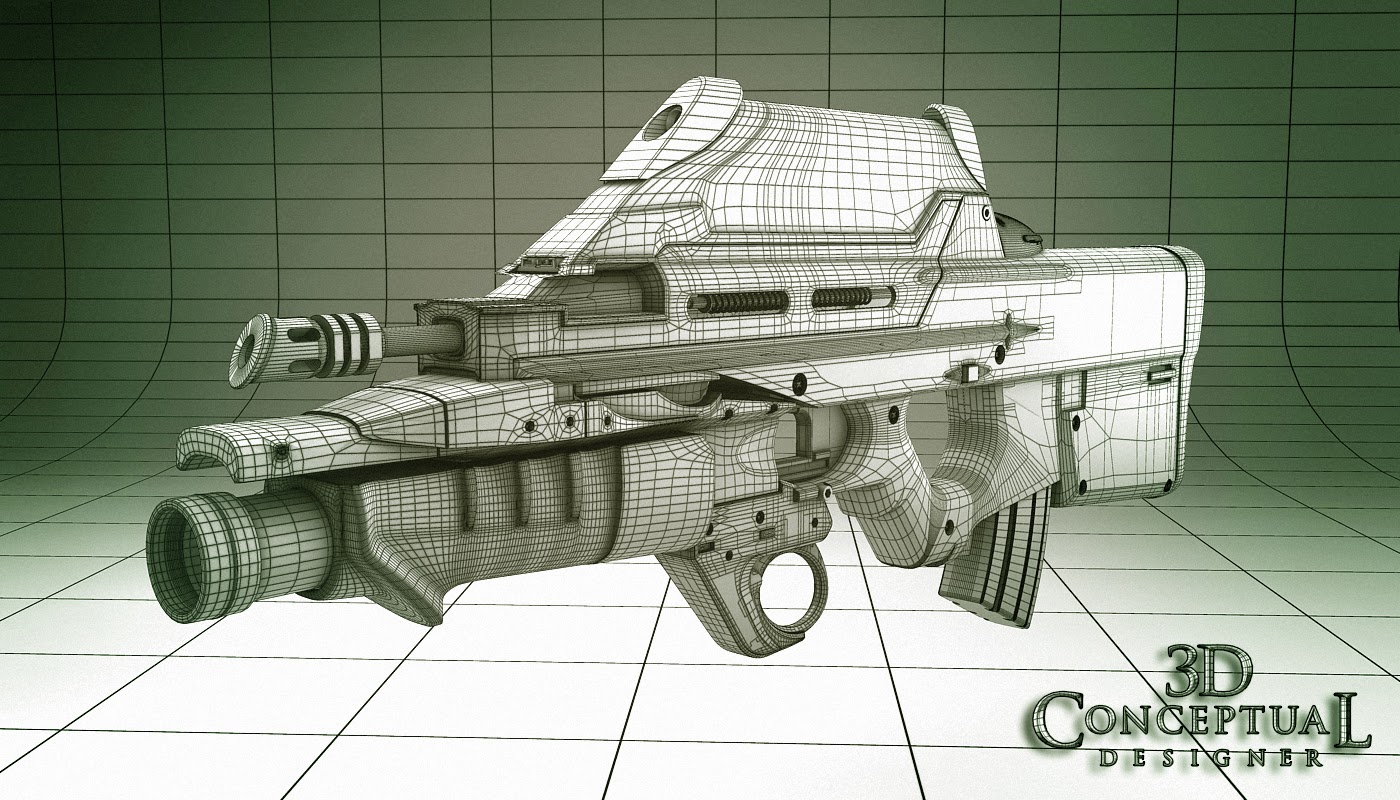 Wireframe renders to show the build. A close up on the details in the various torx and hex screw heads in the construction of the composite virtual replica. 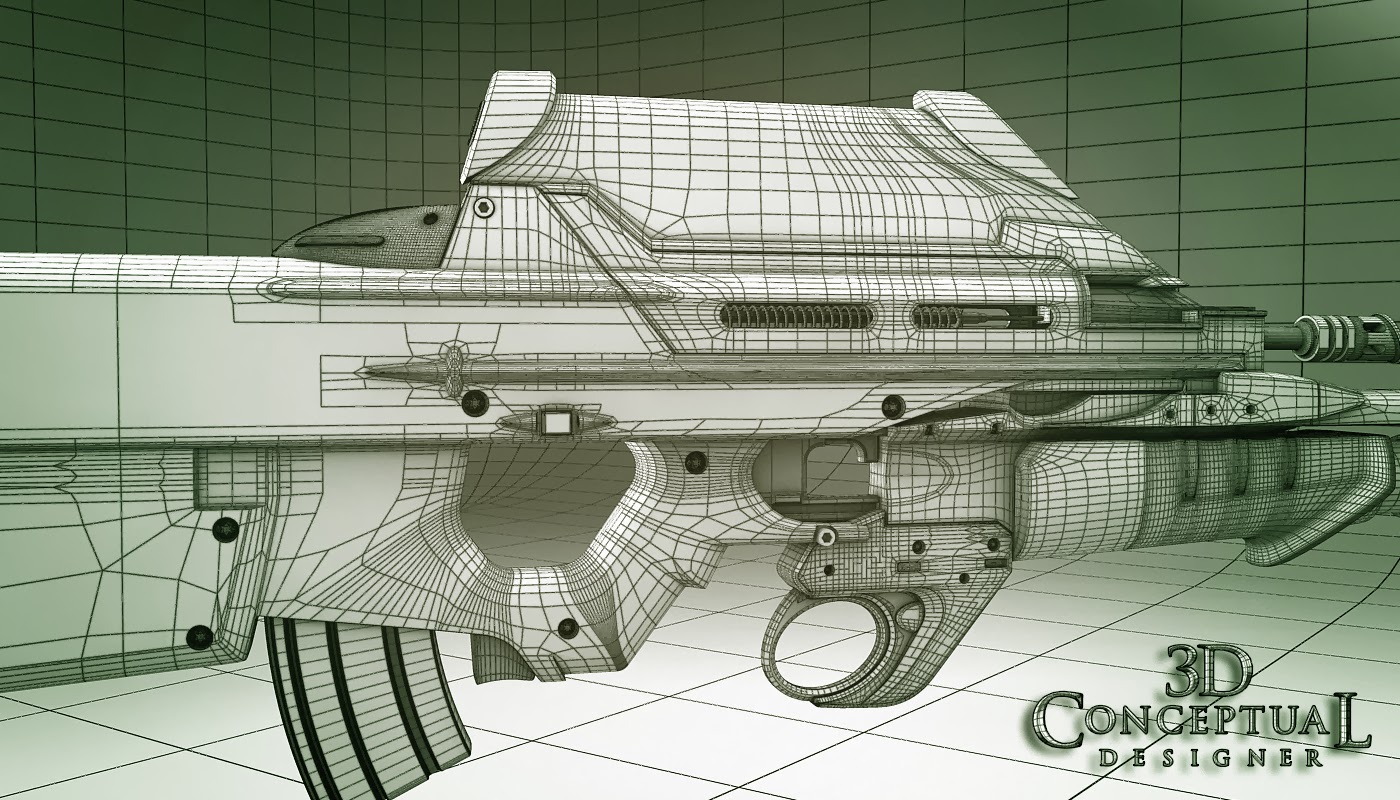 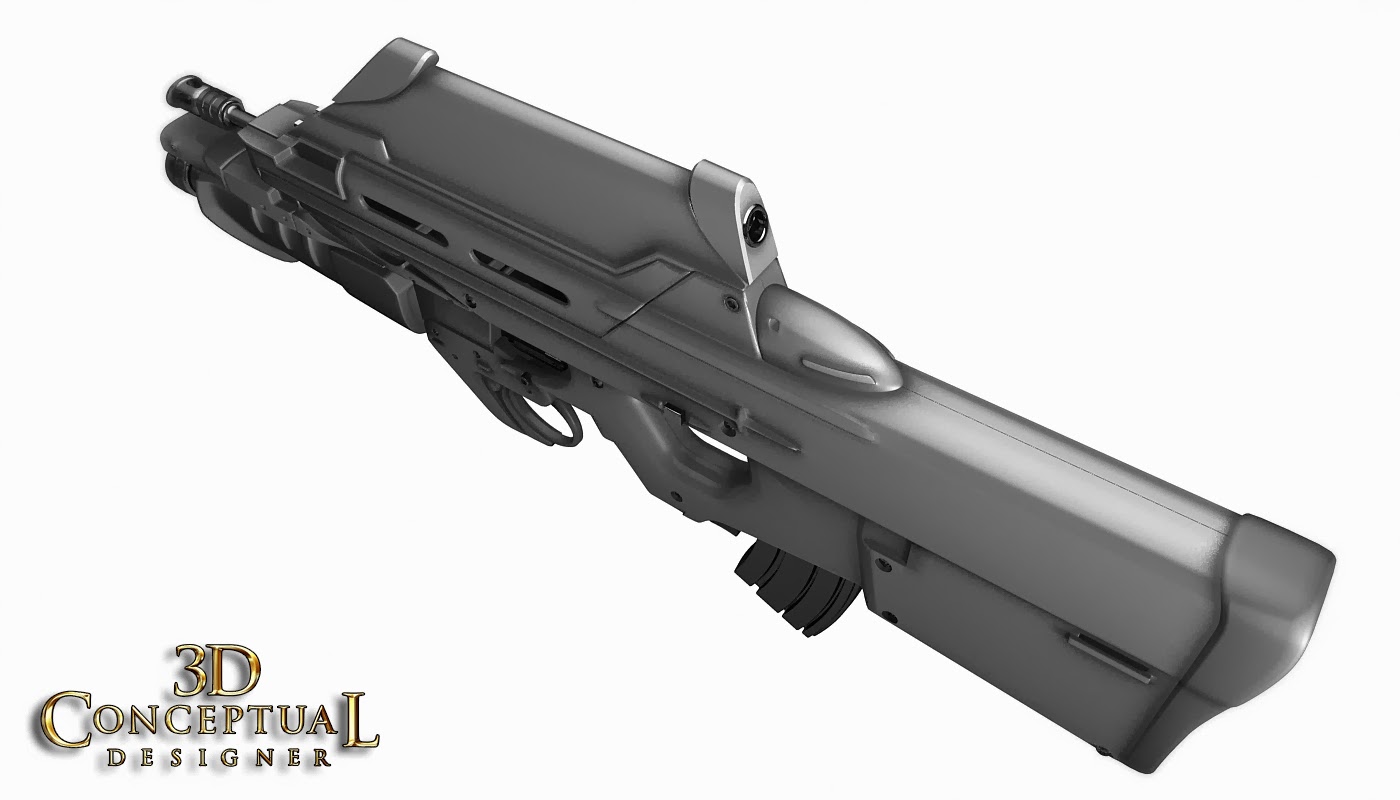 A birds-eye overhead back view [POV] of the firearm. 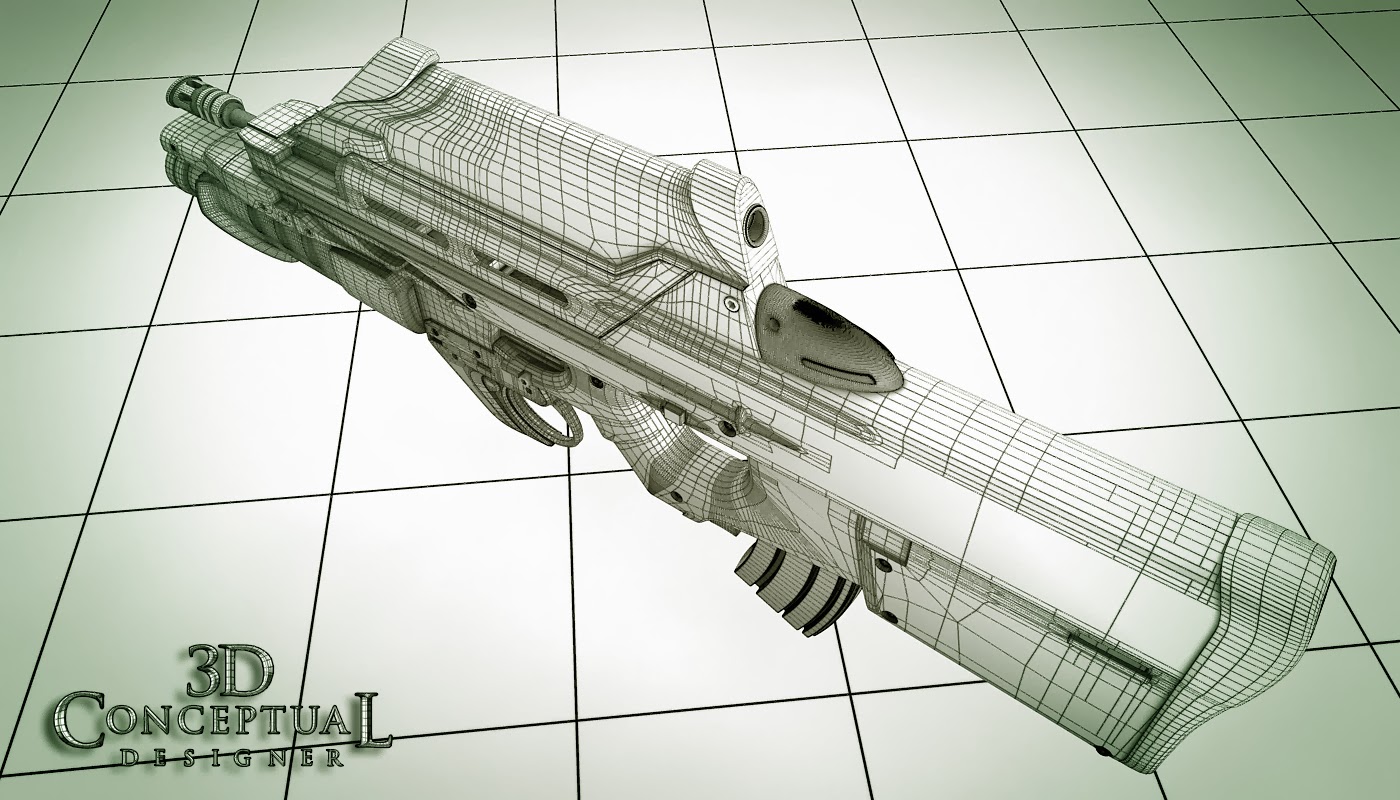 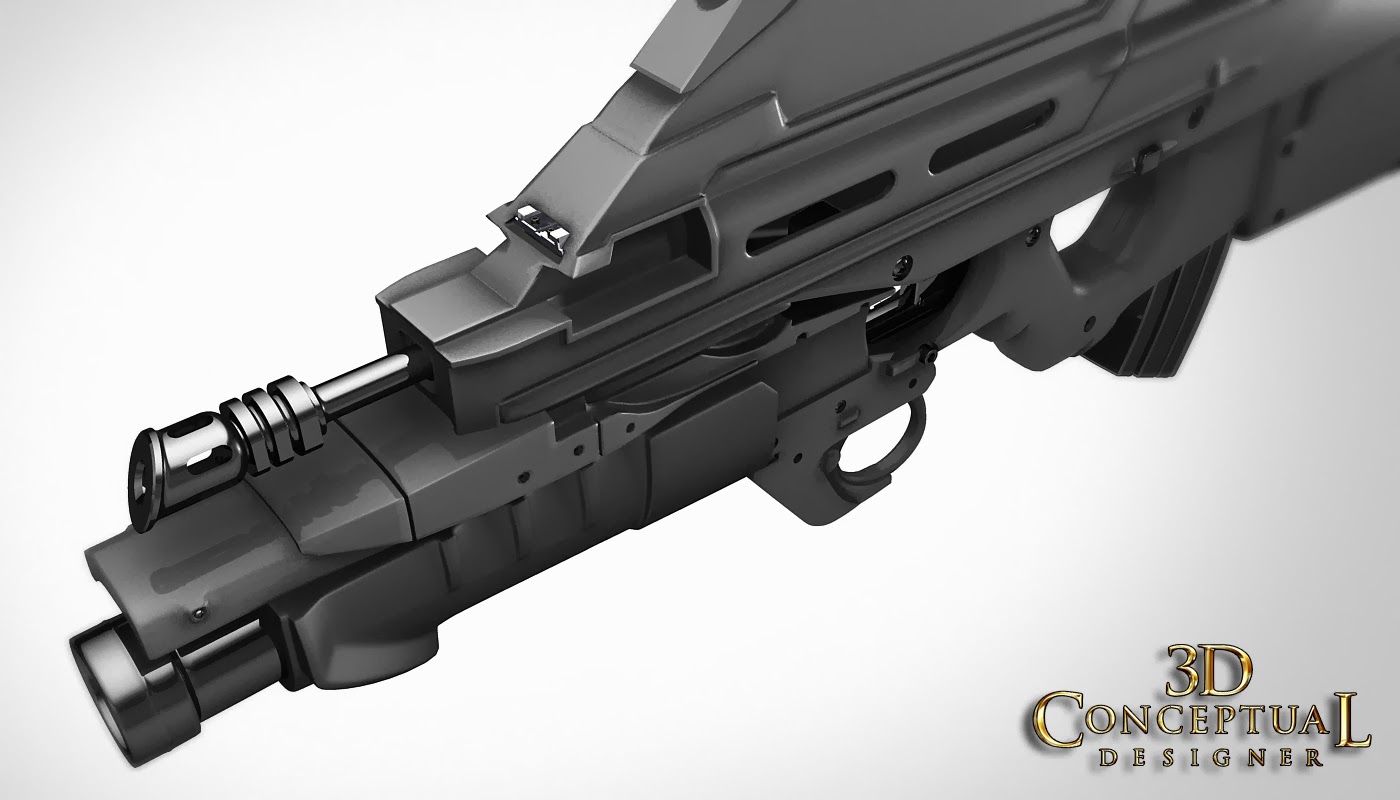 An overhead showing the details out front on the business end of this beast. 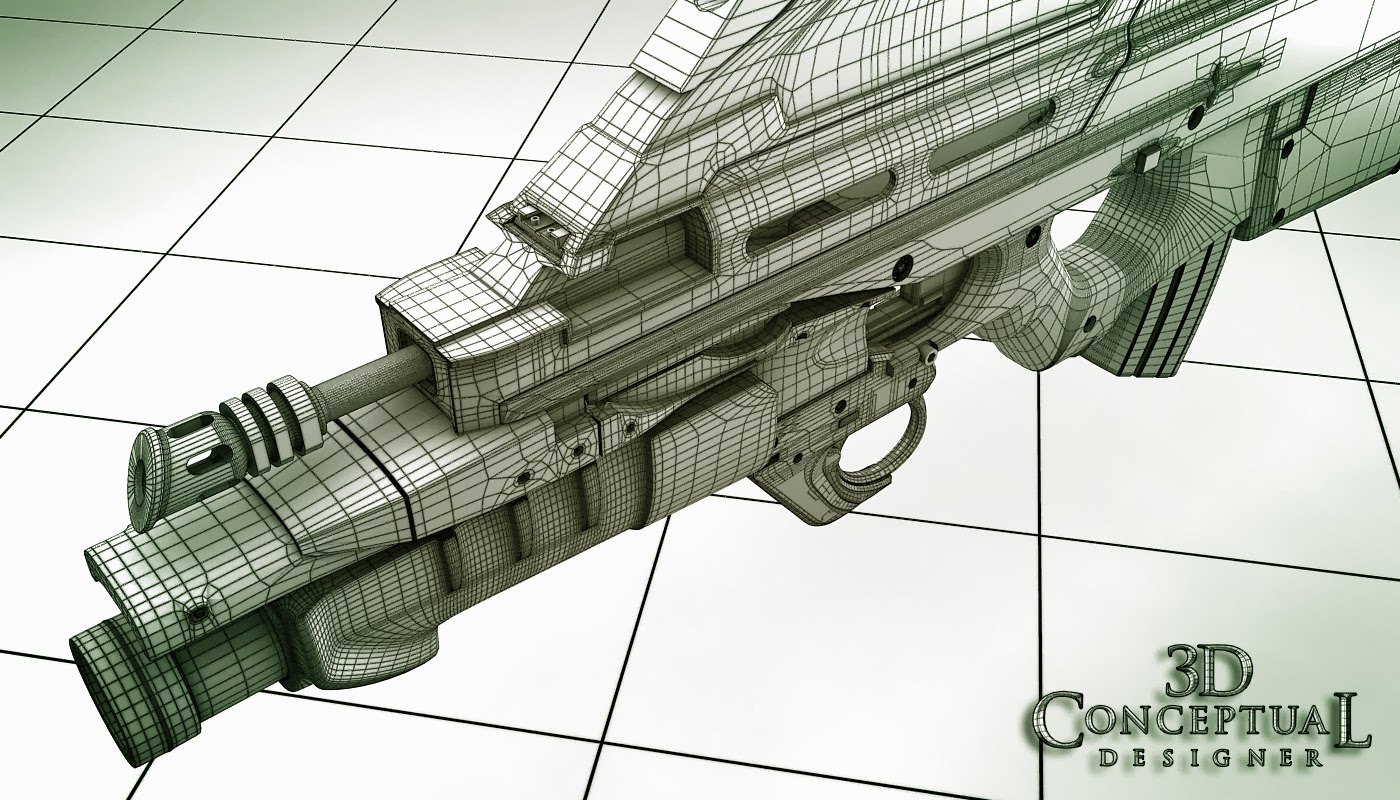 A very complicated cast body to recreate, and the frame is what took most of the build time on this one. 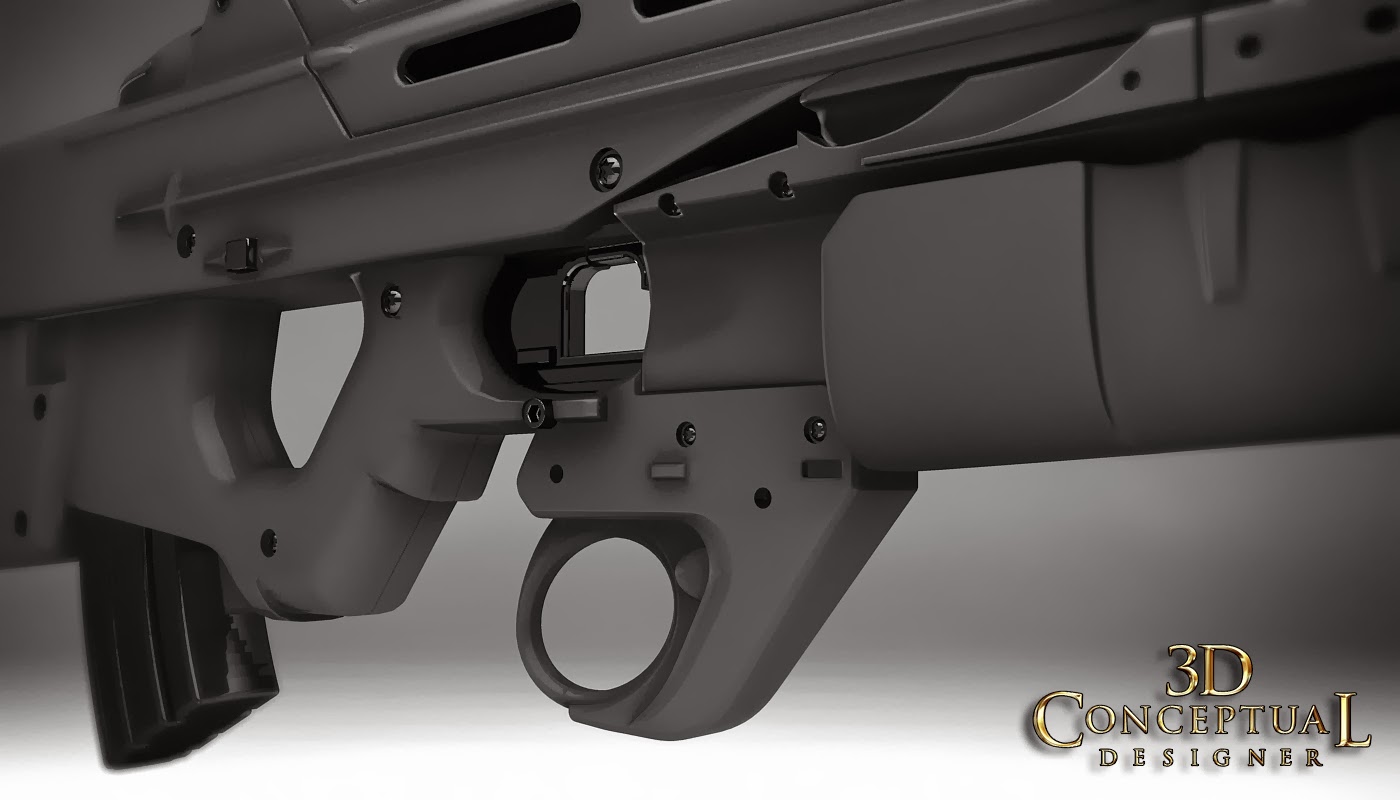 A close up underneath the gun on the trigger areas. 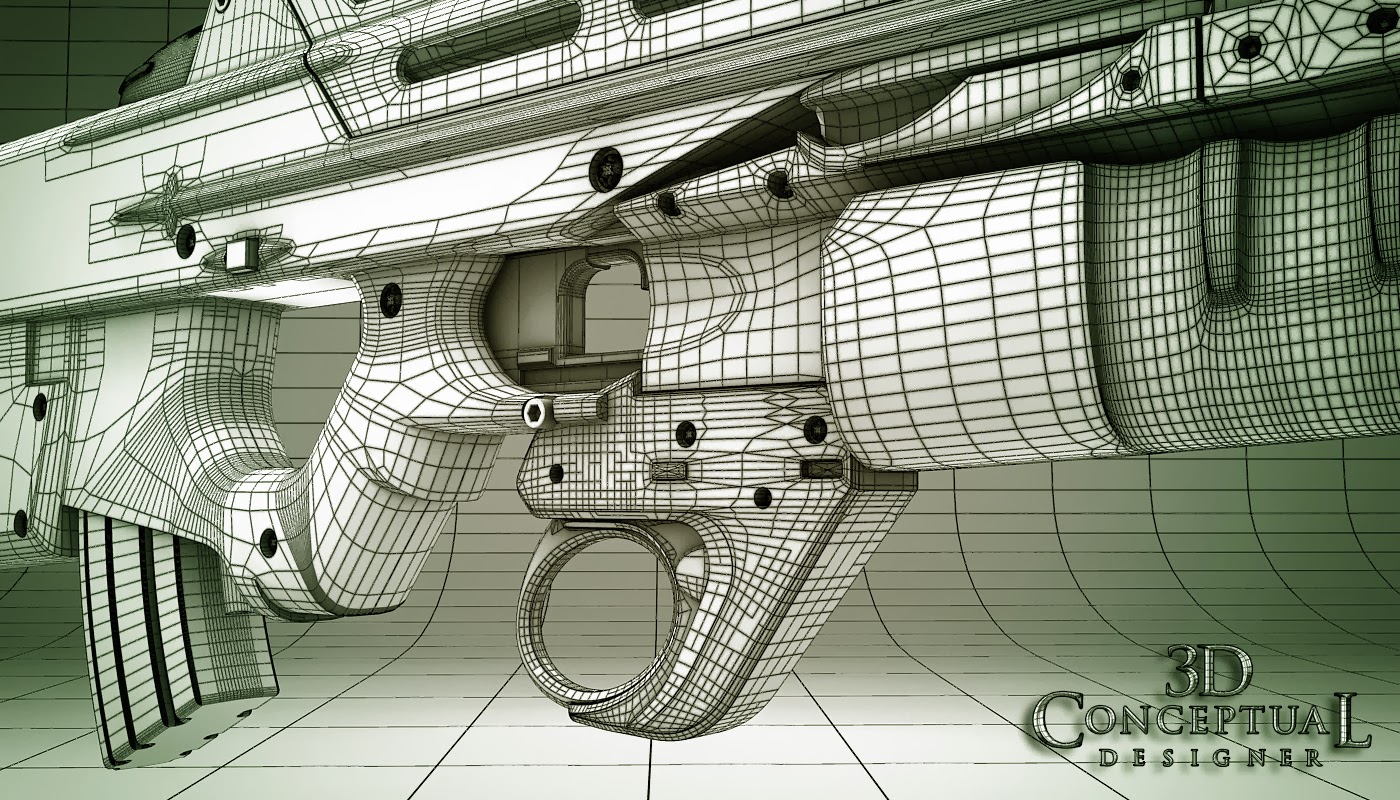 The wire frames show the way I built each part, some quad sub-D, some solid models converted to polys,  and some beveled parts and extrusions. 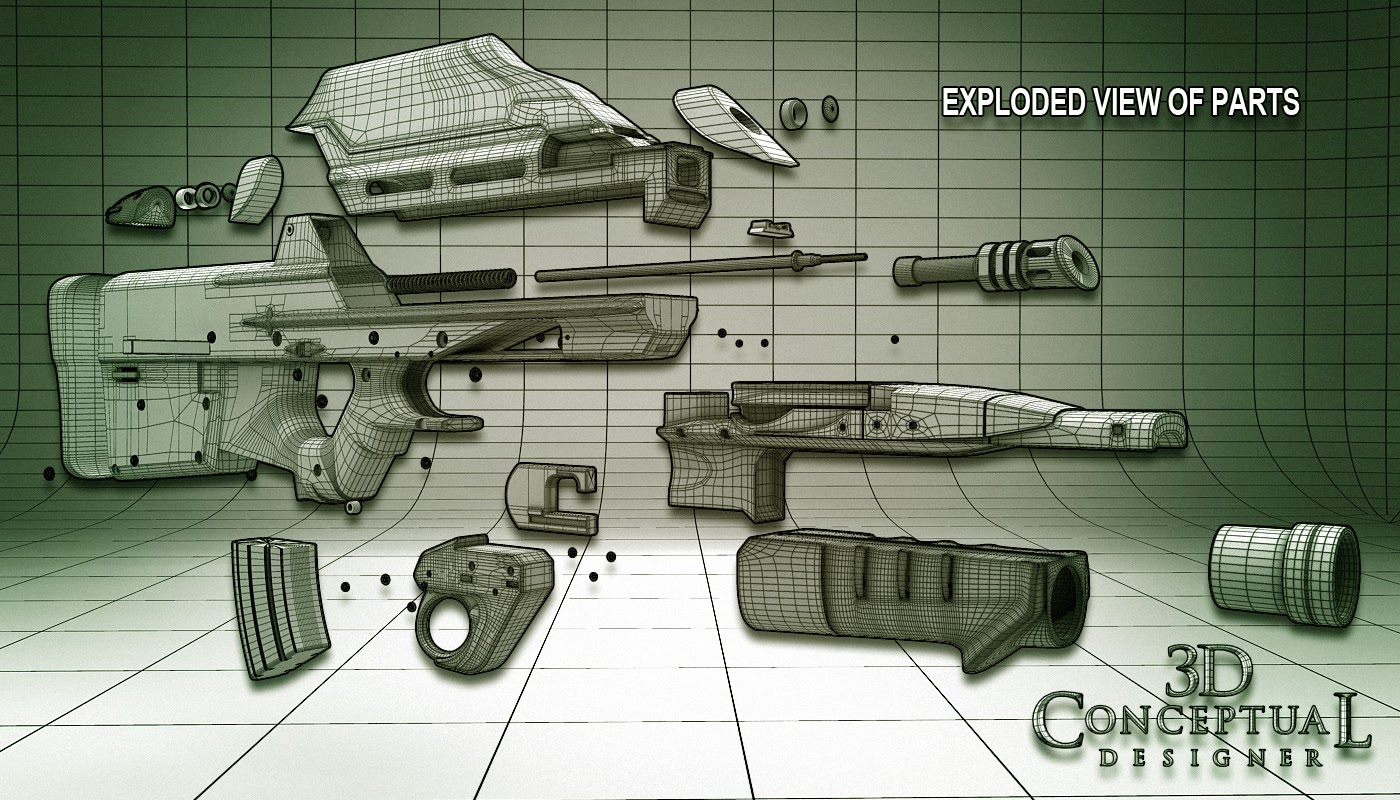 A nice exploded view shows the various pieces I made for this prop build out in 3D. We planned to use the gun in an MGFX animation, but it never went to that stage, so it went up for sale online instead.


Back in 2005 I was 3D Design Director at The Cimarron Group, and I regularly did both 3D Illustration, as well as 3D Animation for the print and AV division, in which I built out highly detailed 3D Models, and today I am reviewing another 3D model, and this one was the specific firearm used by the main character in Splinter Cell, a Fabrique National Herstal F2000.

I have built out many 3D firearms for both print and MGFX work from 007 on up, but this is a very unique designed firearm that has a fully composite frame and fully molded look, but since we were pitching Splinter Cell back then I decided to build this asset out as I had for the iconic Goggles as well here.

I build my models with a high level of detail on the parts so that the end user of the stock model can use them for close up shots and this Microphone was no different. This model was also build suing N-powers Power-NURBS software and exported out as geometry.

Some is a bit rough, but just after building this out nPower added the 'convert to quad mesh' feature which I use almost daily now, to fix all those open grid spaced on the stock frame seen in the wire frames above. If I was building this today I'd go full quads rather tha n a solid build much cleaner for end use and scalable.


Cheers, THOM
Posted by 3Dconceptualdesigner at 11:01 AM