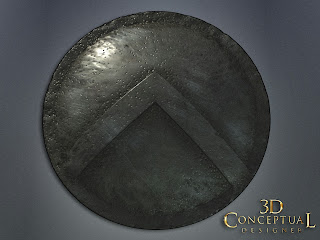 A tilted down front and center shot of the final shield prop I made for the 300 website launch. 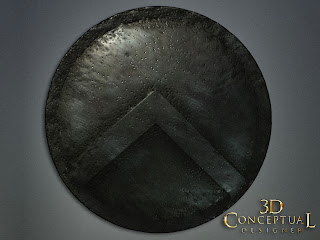 A true centered camera shot for the graphic version on the shield. 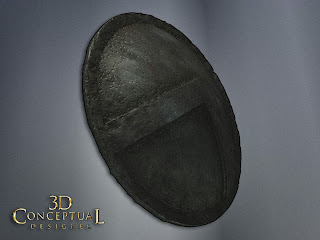 A left side extreme angled view showing off the dimensionality of the shield. This was used as an interstitial screen sweep element. 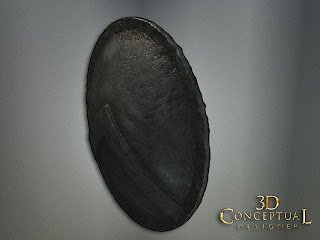 A High right side shot, and the final delivered image. 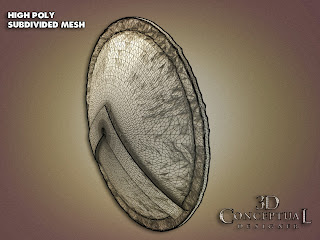 Here is the final subdivided and displaced geometry for the shield. I was still learning the Quad Mesh function for Pro-Boolean so this ended up as triangles with a quick turn around. 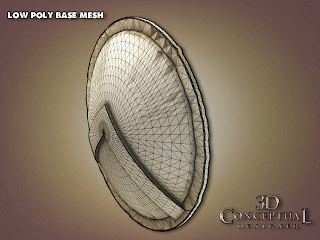 The base mesh with displace on. 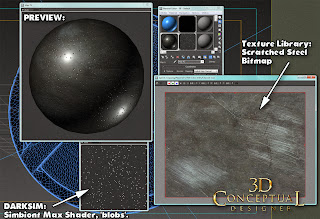 A screen capture in 3DS max 2013 of the various elements used in creating the dirt shader using Darksim procedurals and various bitmaps.

Many jobs I do 3D Illustration for are a full edge to 3D Illustrations like what I finished out for the first Night at the Museum. A full 3D background as the set hallway was both too narrow and to shallow so a virtual set allowed us to modify it to meet the clients needs.

This shield prop represents the other side of that spectrum where all is needed is a simple or small prop rendered out, and in the case of Frank Millers Three-Hundred[ 300], they wanted a 3D shield made for various areas online.

I built this so it could be displaced as the film prop was a rough item , hand made so I did what I had time for in the fast turn around to get close to what was needed.

Also this was to be small, around 400 pixels wide, so I rendered it at 2X size [ 800 pixels wide] as the renders were fast at about 5 minutes even with the Darksim procedurals and Final Render dirt shaders which take more time to go, but deliver much better results.

I usually will go 2X[cubed in surface area] in final render size if the client can afford it, as the file is bigger in case their client wants to see it larger, so they don't need to come back for more renders from me.

This was a 2 hour job, fast and typical for something like this. I delivered four renders at a modest 800 pixels width with an alpha channel [ 32 bit TGA file]so they could Flash-Animate them[ in 2D] and drop them into the various online pages needed.

Cheers, THOM
Posted by 3Dconceptualdesigner at 9:45 AM