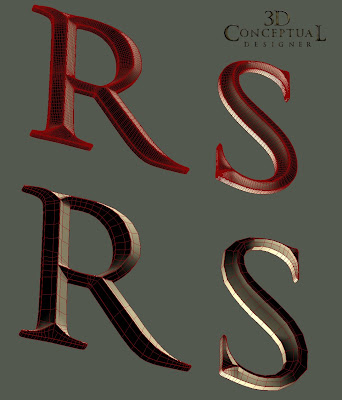 By far one of the most beautiful 3D treatments to take a font to is that of a Single Point Bevel[SPB]. This is where the Characters are beveled to a single point that falls in the middle of the letters width rather than leaving a large flat surface on the top or "face'. It is extruded in thickness like a simple bevel but requires hand modeling for each letter to achieve the look of hand tooled metal. The tiny ends of the serif can be fine tuned as well. Also the profile on the large bevel has many options in that it can be simple and remain flat, or it can have some added surface movement with concave or convex bevels to help paint the light reflections better on the sides of each letter.

Also if time allows build the letters in Quad Sub-D's so they can be increased in resolution for a variety of projects. My first SPB was the title for TROY, and each letter took well over an hour to model. I have a techniques down now where I was able to do the entire Trajen font, letters, numbers, and punctuation, in 6 hours, and they are build Sub-d so they go from very low resolution to high resolution quickly.