Here is the first title I did for Tomb Raider 2, it was a replication in sorts of what was finished in the print for the first film.

I was using procedural textures from Darkling Simulations early on, so I used a shader from the software and adjusted it to create a cement natural stone like texture.

Another cement procedural, only this one I wrote in Dark Tree so I could get flat spots on the texture with the aged incursions eating into the font.

This is actually the rusty paint shader that I adjusted and added in a reflection channel that I could drop in the ray trace from the various renderers I use for reflections and then used the bit mapped sanded steel.

This is actually the lunar moon texture shader adjusted to create a s natural stone to match the theme of the second film in the fining of the ancient city.

A heavy rusted steel texture version. The green bottom lighting found on many comps as to connect to the aquatic theme in the second film.

A glass logo in a mild purple.

Another glass Tomb Raider 3D Logo look I created back in 02' with a blue like glass with some glow FX.

My glass I used on the PPK with some procedural surface cracking added in[ slight].

This is a electron Microscope X-ray texture, as the second film had a' virus' element that they wanted to exploit for the teasers.

A very heavy grained ice like texture for the Tomb Raider Logo.

Here is the basic camera view of the polygons. Two plates of text with a background reflection sphere object[ hidden] 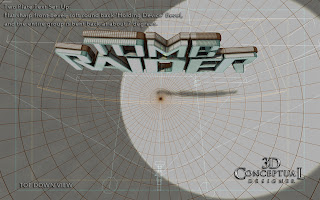 In this birds eye view looking down at the scene we see the camera and the curve added to the double stacked logo plates.


For my second posting on the 3D Illustration and 3D Design work that I performed back in 2002 for the Theatrical Advertising on Tomb Raider 2, I have posted a series of looks I did for the main title I built out and rendered in 3D.

The look of the 3D title was established in the first film with the iconic double stacked logo with two plates of metal with a gold holding device behind the font. First we recreated the vectors for the title and the Font Artist there, provided me with the 'ai" save-as file ready to go in 3D.

I built the 3D type out with a sharp bevel out front and a rounded one in the back to 'roll' the reflection over the edges. I then put a slight bend to the type to give a little more curve to the title. I built this prior to learning to Quad model better, and had I needed more of a bend it would have been problematic as if you bend the face too much the triangulation will produce "folds' as artifacts. I also hand rotated each letter but the lighting made them checkerboard in value so I went with the low angle, slight curve instead.

You can review my first post here, which covers a wide range of items I created for the poster comps.

Cheers, THOM
Posted by 3Dconceptualdesigner at 8:32 AM