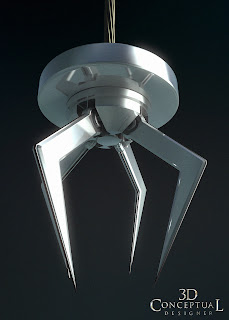 An underneath shot of the mechanical claw I designed for the poster for After the Sunset back in 2004 almost a decade ago now. 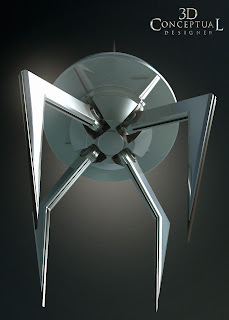 An even more severe angle on the claw arms themselves. 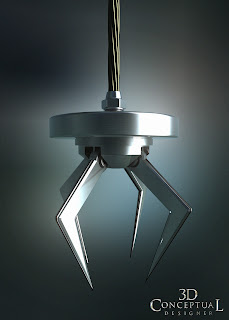 This is the angle that finished for some Key Art applications for After The Sunset [2004]. 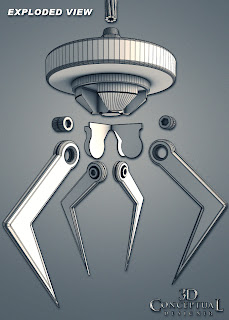 A parts render exploded out showing the various parts I made. Not a Sub-D model as I was in a rush on this job. 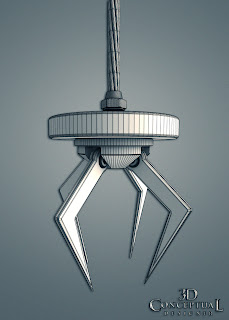 The assembled claw in ambient shaders showing the basic form and geometry based on primitives.

I regularly will do a little 3D illustration for a movie poster prop that either dies not actually exist, or is in the film, but they lack a good photo of it to use, so I go off and create various items that get comped into the final Key Art that I help with, so for todays post, I am reviewing a Mechanical Pincher for a Diamond Heist film from 2004, After The Sunset.

I was give about 4 Hrs to design, build, light, texture, and render out a 3D claw that they could use in the Key Art comps they presented to the client. I created this mechanical clamp that grabbed a jewel that Pierce Brosnan was holding, and this 3D Illustration did end up finishing for some applications.

I love these quick jobs, they are my bread and butter as most work are these 3-5 Hrs fast turn around items I do for various teams that lack an in-house 3D Artist or Designer like myself, so freelance on a job by job basis is how I provide my services for most of my work.