The primary Design for the Hypercruiser was proportioned like a Deuce Coupe Chopped Hot Rod, one of my personal faves' for The Phantom. I did use this for Max's car with the wheels, and the flying one for the Police force of ENFORCERS.

After we decided to remove all wheels and make it a floating vehicle only for the most part I have this revised sketch I did for it. 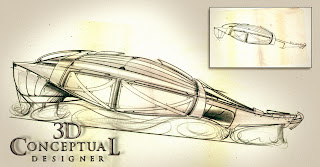 I also did a plate armor overlay as in once script there were B.I.O.T.'s working putting this on so it had to look removable in design. 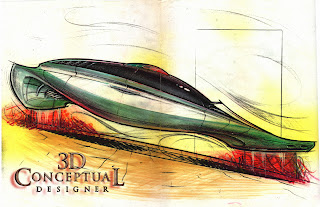 Here is the internal color key I have[ alt view here]

Today in my 120th Phantom 2040 posting, I am posting a bit of the process sketches thst I did for the Hypercrusiers for the Enforcers from the show.

I was able to design out all the futuristic vehicles for the show, and as an Art Center grad from Transportation Design, this was a dream job very early on in my life right out of school.

I first did the body form pass with wheels, then we learned that they are rarely seen on the ground so I focused on a hovering design without the wheels as seen above as well as I progressed forward. I always had a variation or two, usually an armored version,and sometimes a wrecked one too, like this, this, and this.