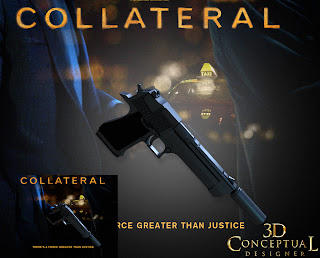 The main 3D Virtual firearm render that went to finish online for the film Collateral back in 2004. 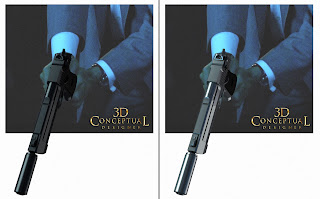 The secondary angle with a silenced light and dark metal version of the Desert Eagle for Collateral. 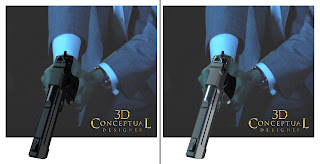 The regular non-silencer render of the firearms for the posters in light and Dark varieties. 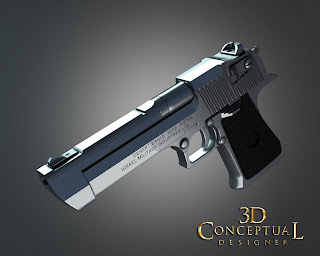 I did various angles of the firearm as well as seen in this polished version. 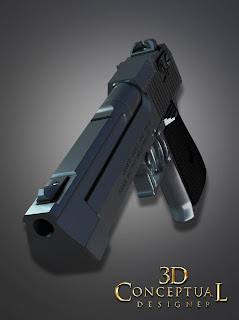 A 3D render of the Desert Eagle. The model is still for sale by my prior employer online here.

As my first design post for the new year, I kick it off with a project almost a decade old now from 2004, that I did while I was running an in-house 3D Design Department at The Cimarron Group in Hollywood, CA, and this project was the then new film, Collateral.

The print department had shots of the main character Tom Cruise but they needed better shots of the gun he held, so they instructed me to build out a Desert Eagle 50 caliber gun, both with, and without a silencer, as well as in a bright finish, and a dark gun metal finish as well as seen above.

Once I had the 3D asset all hand built in 3DSmax after a bit of online research, I rendered it out for the various comps using the lighting and angles for Toms hands for the shots.

The Art Directors themselves would mask the fingers and such, so I delivered a full rendered asset with an alpha channel to simply drag-n-drop the gun right over the photography, and they can just get to work from there.

Photography of the gun was about triple the cost in studio, photographer, and masking work, so we went virtual, and this is where the Print Department, or more specifically Cindy Ruby who ran the division understood that it would be faster and ultimately much cheaper do go virtual.


Posted by 3Dconceptualdesigner at 12:48 PM