A flatter extrusion done early on for the 3D logo exploration I did for the DVD packaging for Code Name:The Cleaner.

A fun glass deep extrusion version of the title in 3D.

This version was an middle level extrusion with a black rubber holding device on the main title.

For this version I added a brighter lower light to up-light the deep extrusion a bit more.

A ruby glass version again and with this round I did all three plates on the main title in ruby glass and used green glass on the tagline.

For this last round, I removed the holding device and rubber edge on the main title and did a hollow glass logo using the 3D Shell modifier in 3DSmax. You get good internal caustics with a hollow model.

A version sans the tagline was done as well. 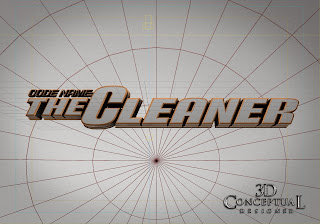 The basic 3D Scene set-up for the 3D Logo. You can see the Rectangle Light[ box-light] up top of the frame. 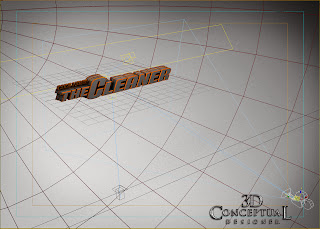 A birds eye shot of the overall scene with the camera there in the lower right of the render.

Back in 2007 while in-house running the 3D Design Department at the Agency The Cimarron Group I did many 3D Logos for Both Theatrical Print, as well as for the Home Entertainment division which would do the follow up Key Art of the DVD and On Demand release for the properties.

Today I cover the quick 3D logo exploration I did for the film Code Name The Cleaner.

A fast half day project was tasked to me to take the font they had locked in for the project and to do some dimensional versions of the type treatment as a 3D Logo. I built out the various plates and created a set of differing red material as this was the basic direction given by Art Director Emily Fernadez.

A fast fun little gig, typical of my daily work. Sometime I get a full day build of an entire city or location,a d sometimes I am able to fine tune a 3D logo for a few hours as I was afforded here.

I enjoy both types of work as they are both design challenges, and this allowed me to do a bit of material experimentation with the ruby red glass.

Cheers, THOM
Posted by 3Dconceptualdesigner at 9:12 AM