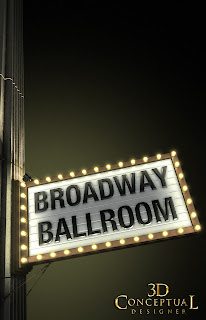 Here is the final 3D Illustration I provided Art Director Chris A. Hawkins for the Broadway Ballroom One-sheet designed by The Cimarron Group when I was in-house doing 3D for the various divisions. 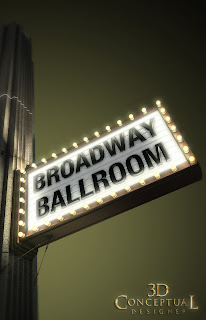 A lower angled view on the 3D Theater Marque with some depth of field added. 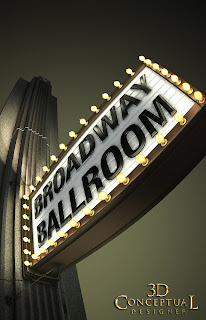 An even lower angle on the sign with a fish eye lens added as well. 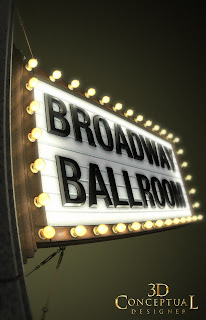 A version where the Marque is the prominent feature[ a teaser-ish feel]. 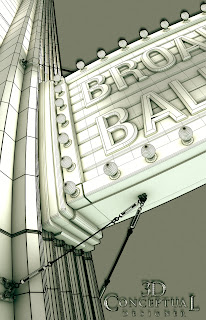 A shot showing the fast build, I did not do this 100% subdivision as we had not time or budget to do so.

When times were slow at Cimarron they would fill in the spaces with posters that were not theatrical in nature, and for todays posting I cover a design I helped with for the Princess Cruiseline Dance show called Broadway Ballroom.

A simple concept with dancers atop an extended Marque sign hanging off an old deco building. I had done a few of these in the past, and they liked my designs I had done years prior for the film adaptation of Chicago here, so we went in a similar direction.

I built out the sign, bulbs, and all the little cables and bits to add realism to the sign, and then I got the Illustrator file from Chris to build out the letters. Once beveled I converted them to Editable Polygons and added mini bevels to the bevels to get an added highlight on the faces since the type was predominant in the final as seen here on the Directors site.

I fun project as I love architectural logos and vintage signage, so this was a fun one day gig.