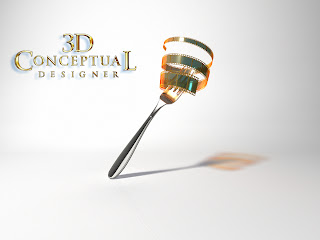 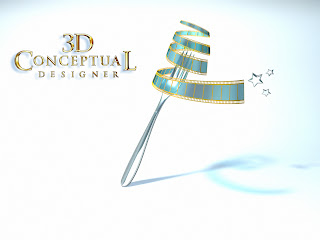 We played with various colors on the filmstrip and different wound up film looks too. 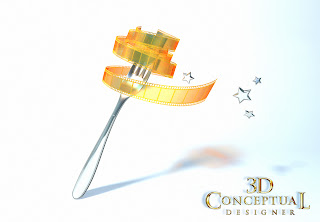 This is the final design that went to finish at 4500 pixels wide for Universal Studios Hollyoods Wolfgang Puck franchise in the park. 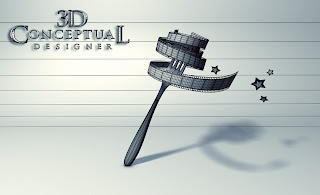 Here is the polygon view of the final frame. 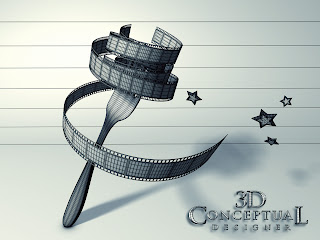 A zoomed in camera showing the rounded bevel details on the film strip edge to stylize the look and get some nice highlights. 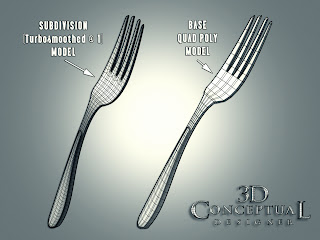 Here is the Poly view showing the the low rez quad modeled form and the smoothed subdivided final model next to it.

When I was in-house at the Cimarron Group from 2003 to October 2009, I provided 3D Design, 3D Illustration, 3D animations,  and custom 3D modeling services to the various divisions at Cimarron, and the Corporate Division had a running client contract back then with Universal Studios Hollywood, and I had done quite a few projects for Mary Ellen and her teams in the past.

Mary Ellen had me build out this 3D illustration with a simple concept of a fork with wrapped film strips like spagetti would be, would up in a ball on the end.

As seen above, we experimented with a few looks in both colors, and the way the film wound up around the fork tip.

It eventually finished out and was used in the fine dining franchise in the park.