The new actual 3D logo with a very deep extrusion for The Sopranos final Season. 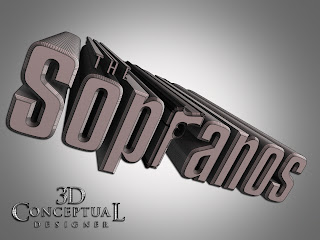 Here is the mesh view of the scene, the red tint on the type was due to a bit of orange in the light needed to match the 2D. 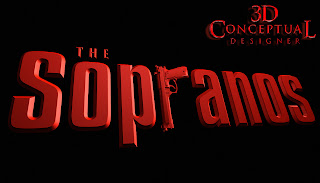 For this variation I substituted a fully modeled 3D handgun for the simple outline used. 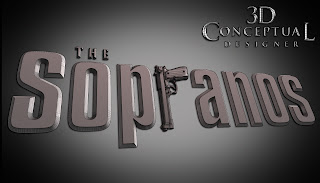 Here is the polygon Mesh view of the above scene with the Beretta 9mm in 3D. 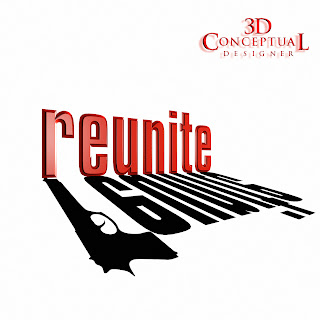 For the last season reunite was the theme so I did this comp with the famous gun for the "r' just in the shadow. I achieved this with a shadow made from geometry. 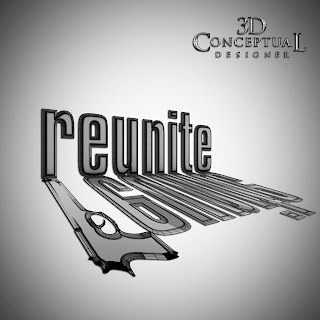 Here is the polygon mesh view of that same shot showing the squished font used for the shadow as well. 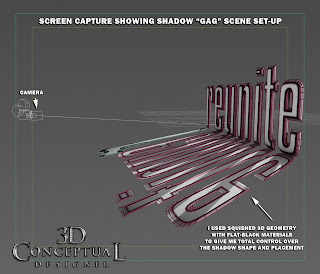 Here is a screen shot from the side showing the basic layout of the scene with the fake 3D shadow tipped down using the Free-Form-Deformation[ FFD].


The original Logo used for the hit series The Sopranos, is actually a 2D fake to look 3D. It is a simple Photoshop exercise using the bevel tool, along with a Plug In to get the beveled look that they wanted, so my task was to do an actual 3D version of that 2D Fake.

I have copied a few 2D looks and translated them into 3D so this was a very fast project, but I did get to do a small bit of experimentation. I suggested we use a full 3D gun for the 'r' so famous in the logo so I substituted the type 'r' for the handgun one in a few comps we pitched to see if it would stick, no luck, though a fun attempt.

I also did a whole series of deep extrusions as seen above from about every conceivable angle as well. That too was canned in favor of just a simple 3D beveled type, basically an exact 3D copy of the 2D version.