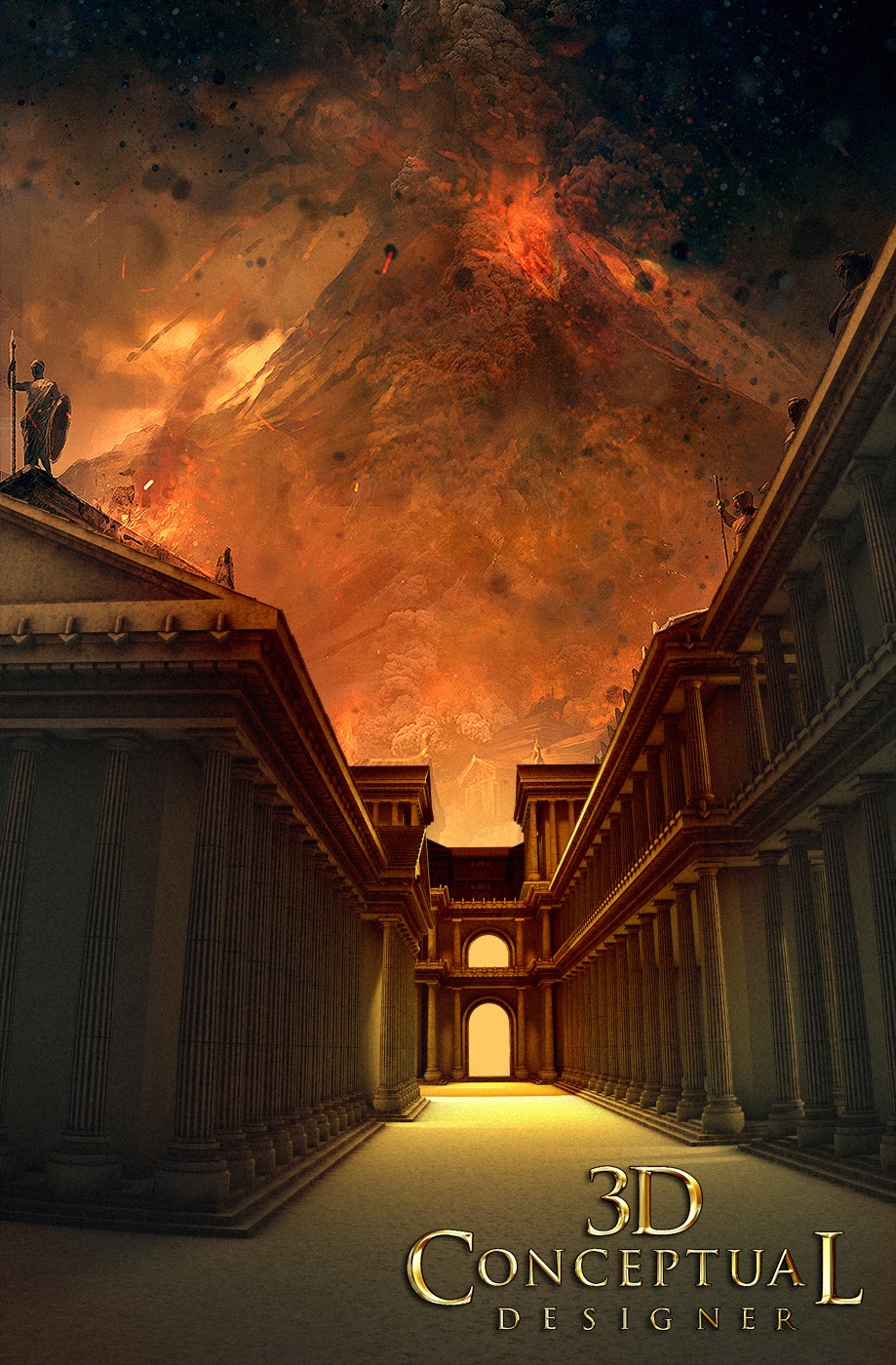 Here is the shot as delivered to the client for Pompeii. All I was to deliver was the architecture for them to blend into the comp. 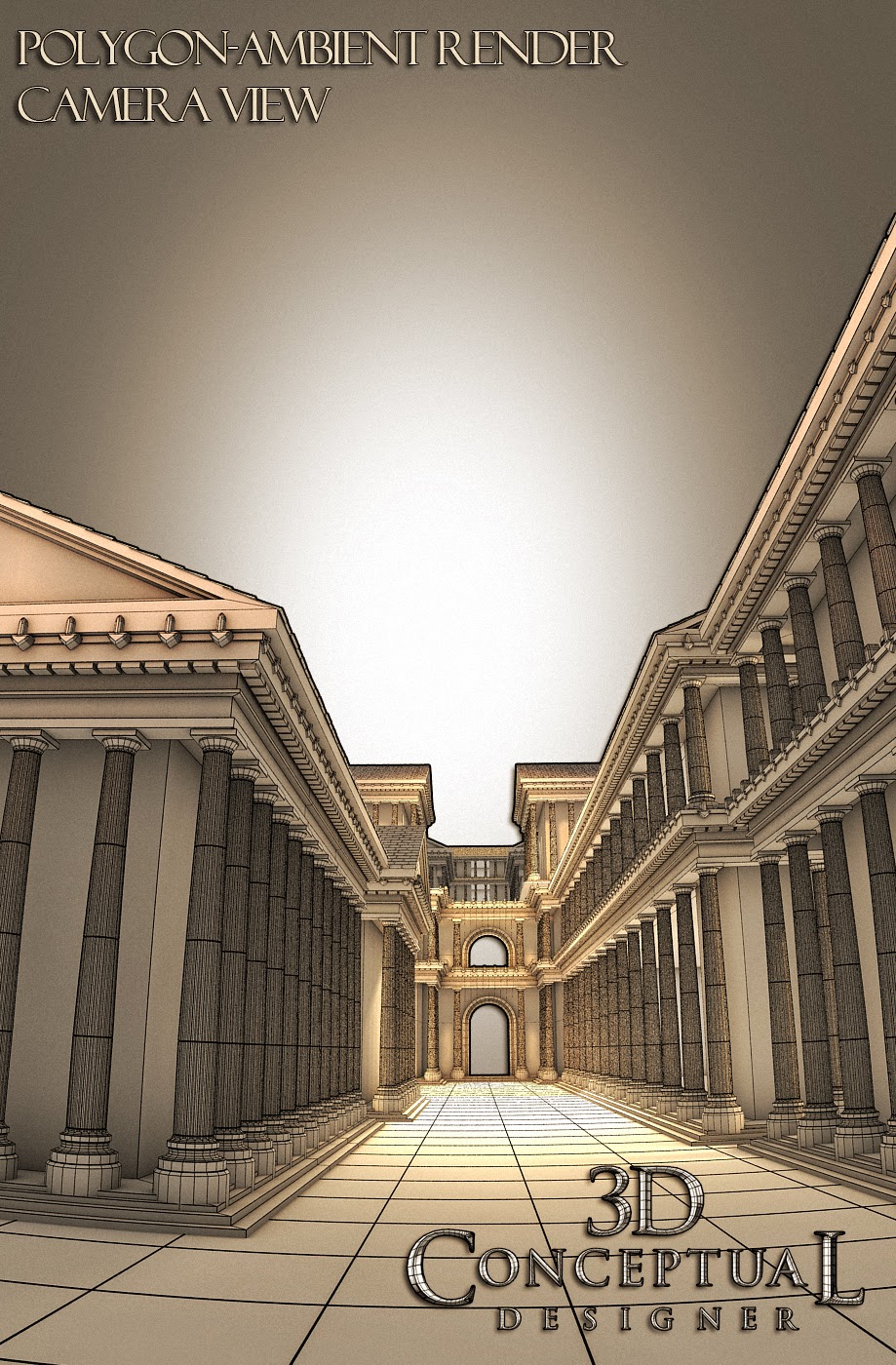 The wireframe render shows the 11 degree fish-eye effect I added to the shot as this was a dramatic view and a bit of curve to the lens helps out tremendously. 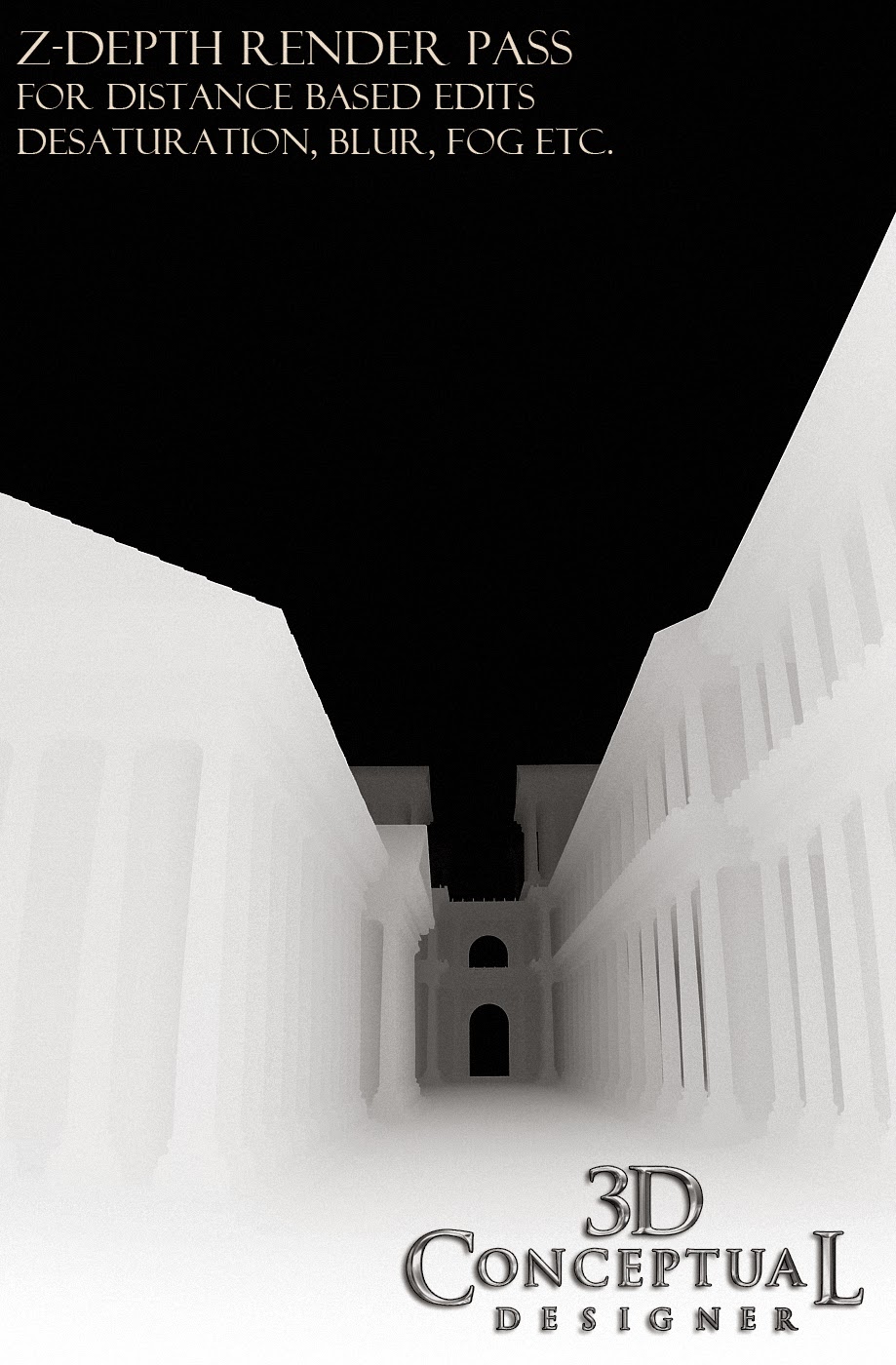 Here is the Z-Depth mask. I put one in all 3D Illustrations, so the client has masks for post work. 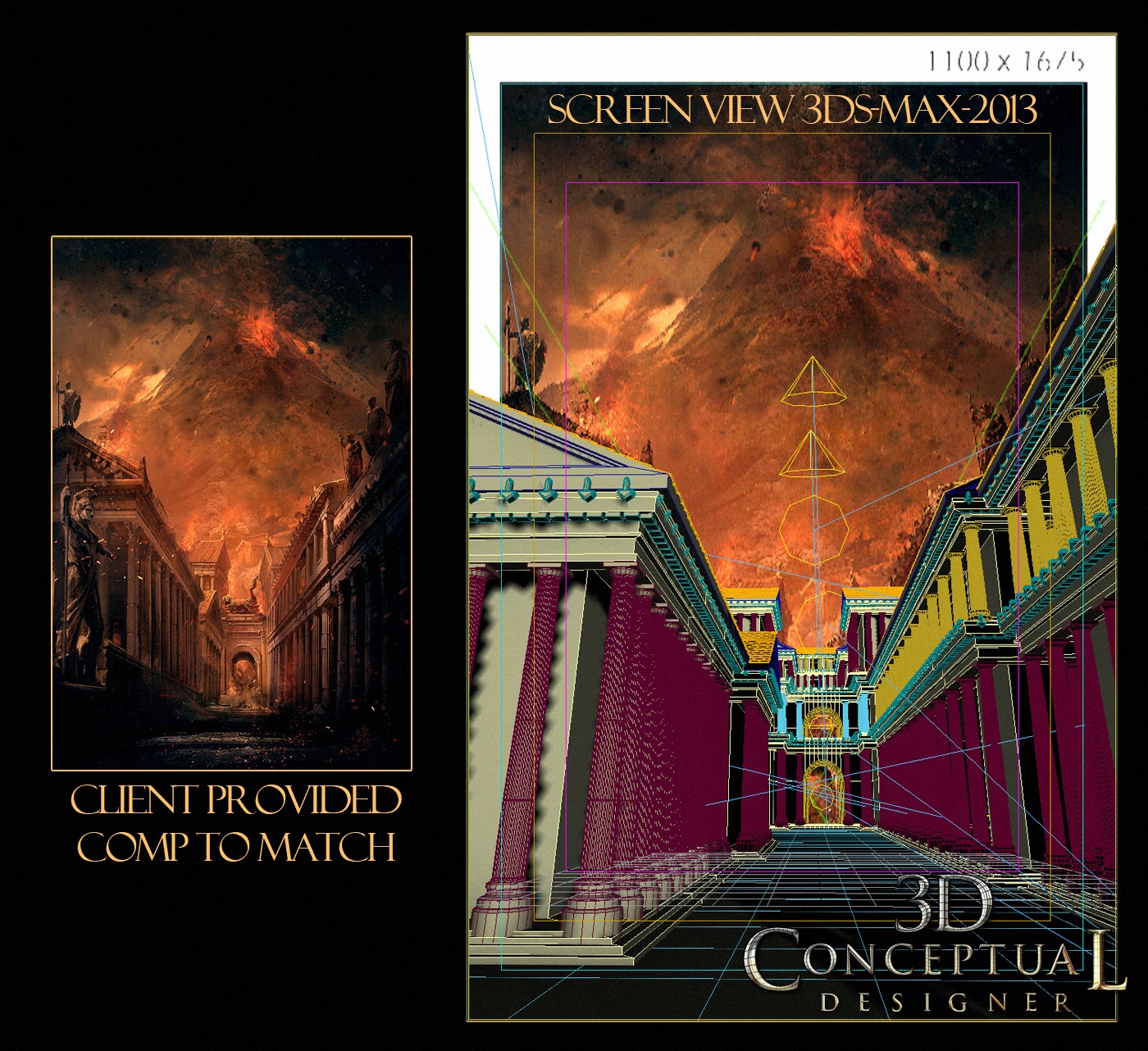 A Screen shot of the build out next to the comp file sent to me to match. 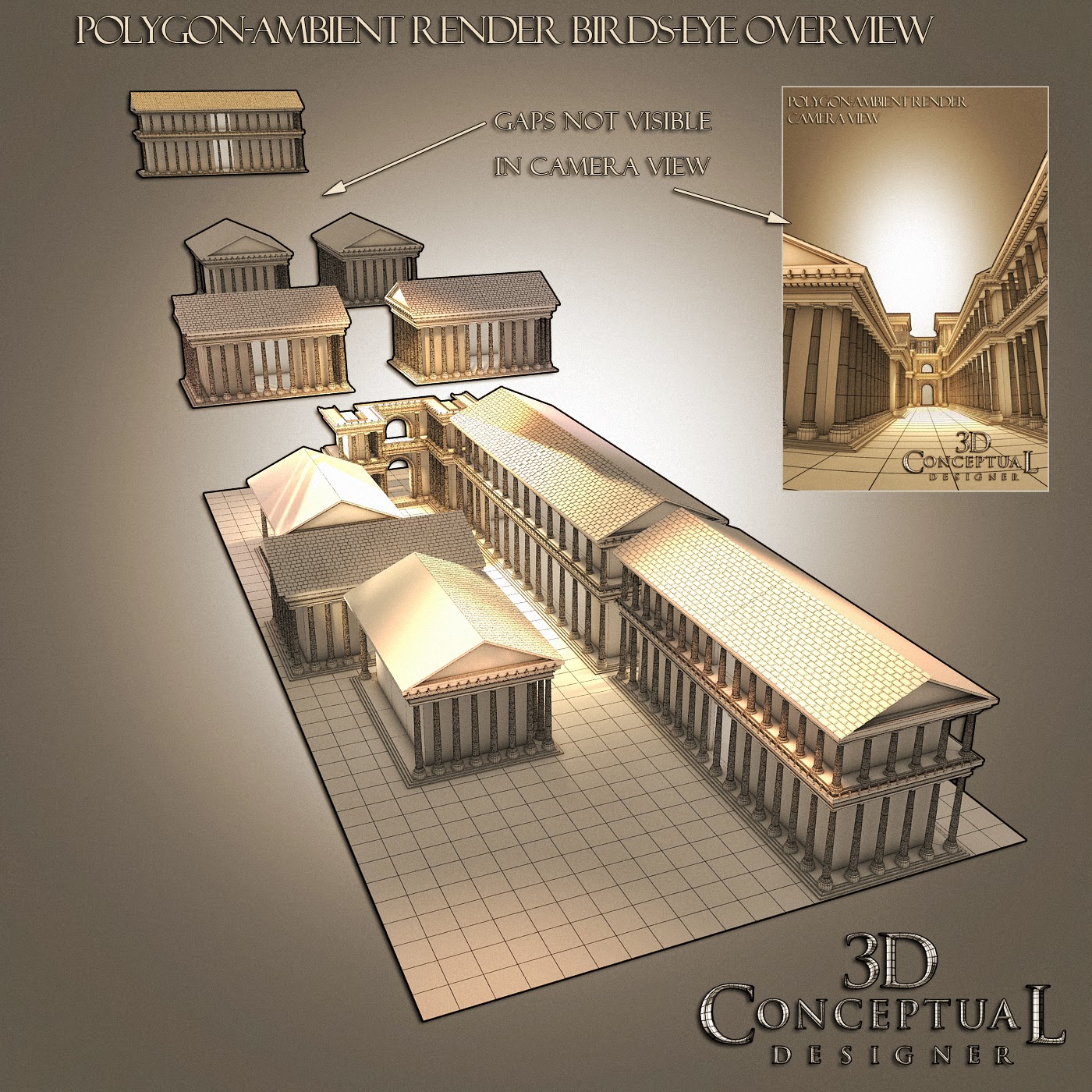 This birds-eye shot of Pompeii shows that I only built what is seen by the camera, a trick I learned doing TV commercials working with the Miniature Shop. 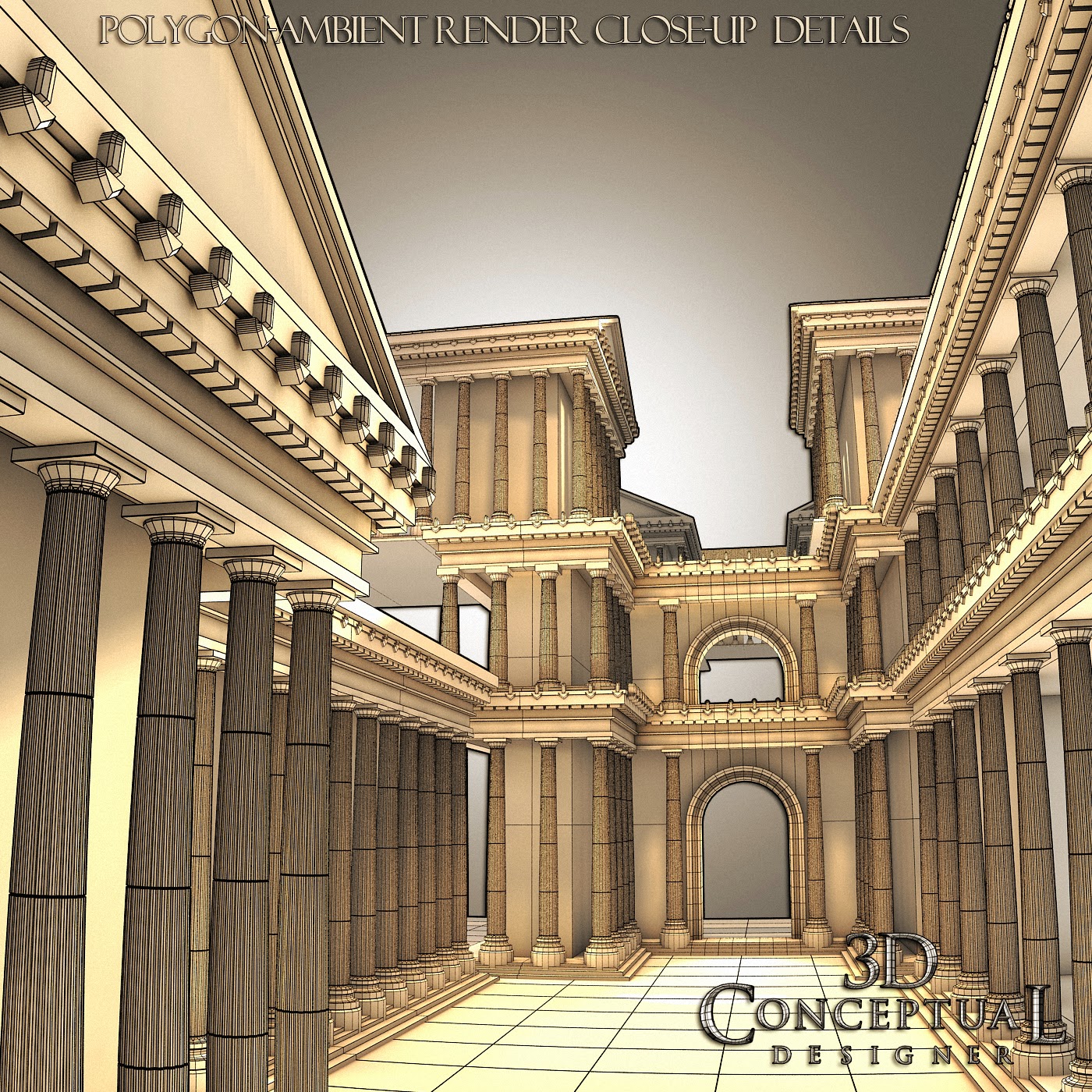 Down inside the Alley closer to the end archways. 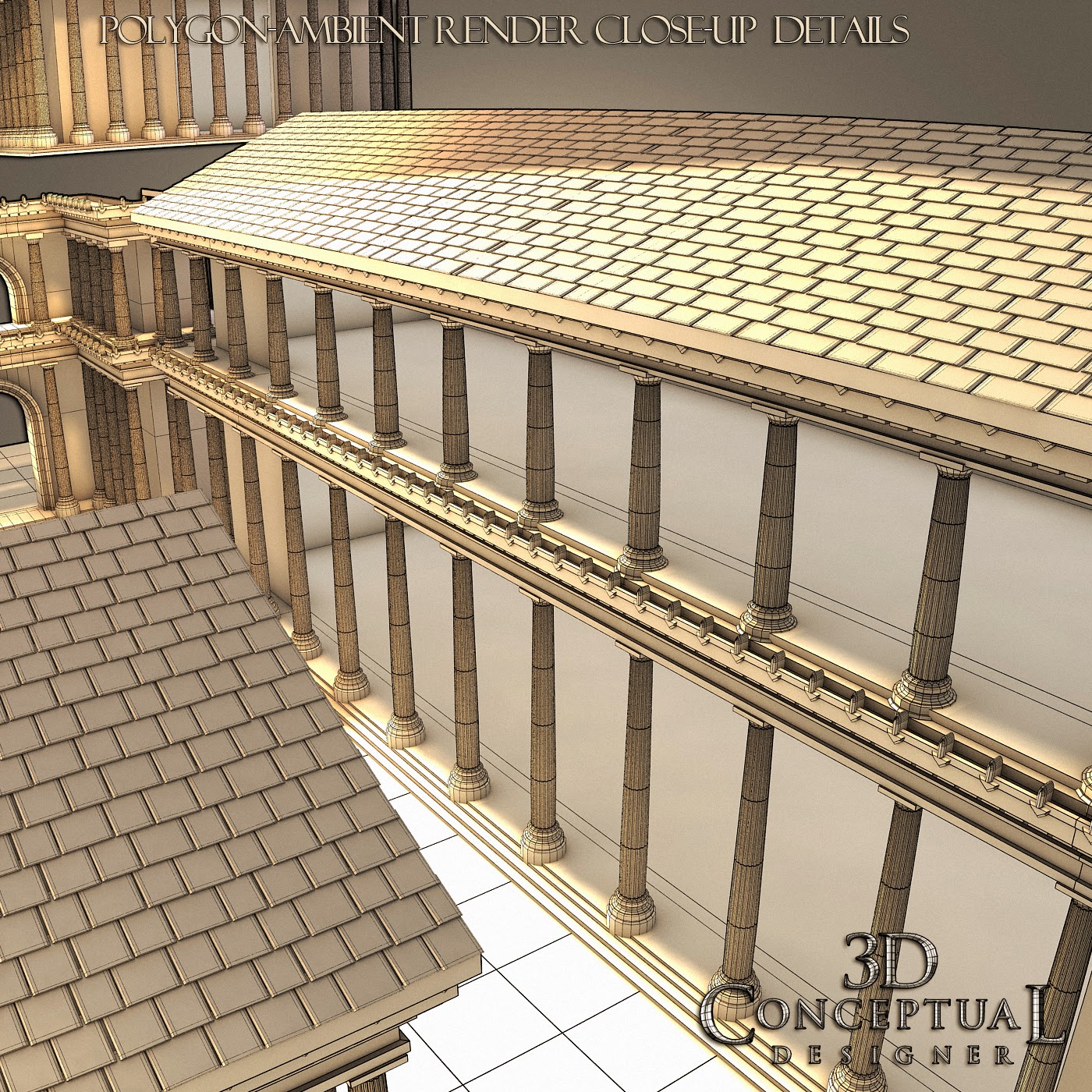 A Semi raised view shows there is nothing inside the buildings on the 2nd floor as they were not seen in the shot. 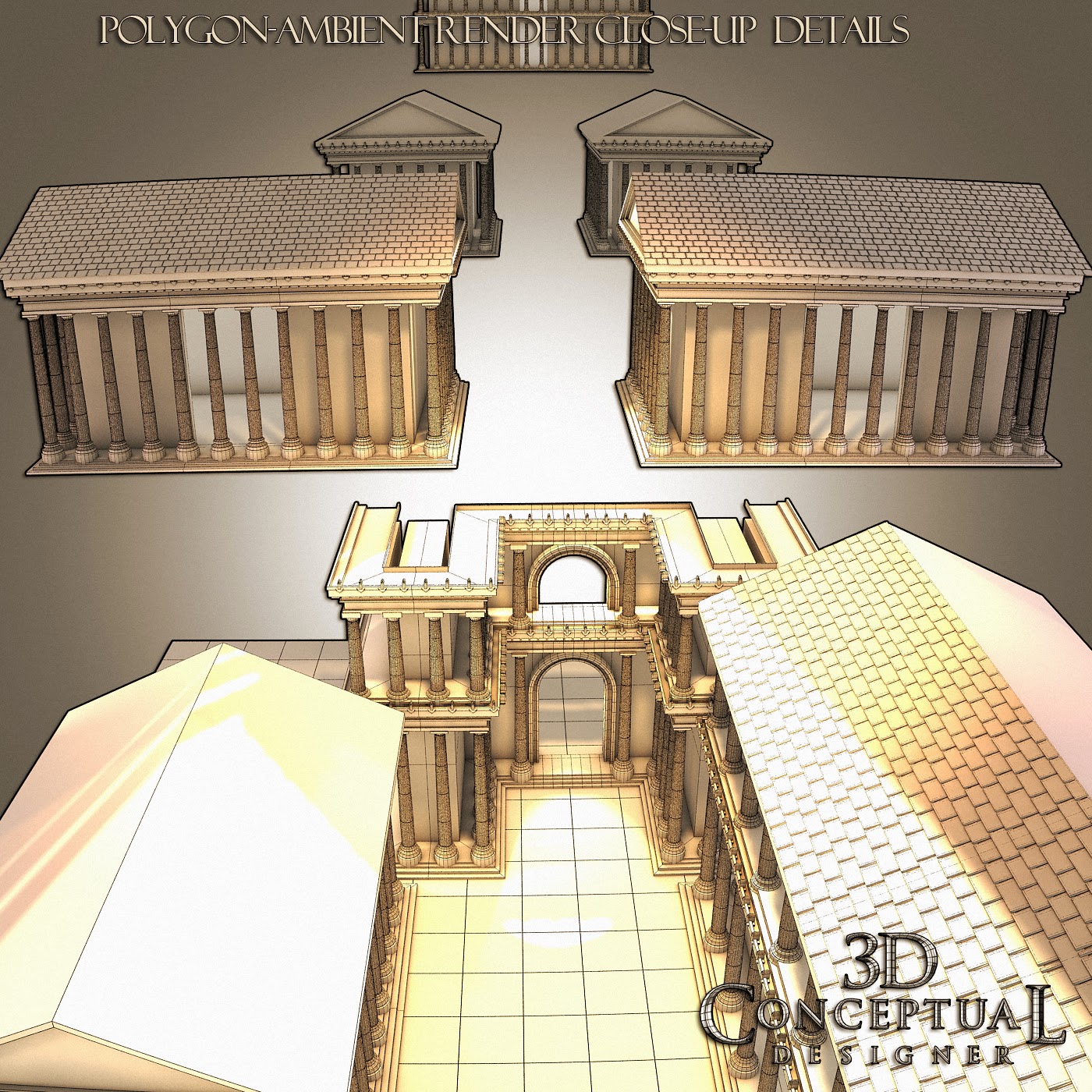 A centered overhead plan-ish view shows the spacing of the building that were scaled for distance and moved away. 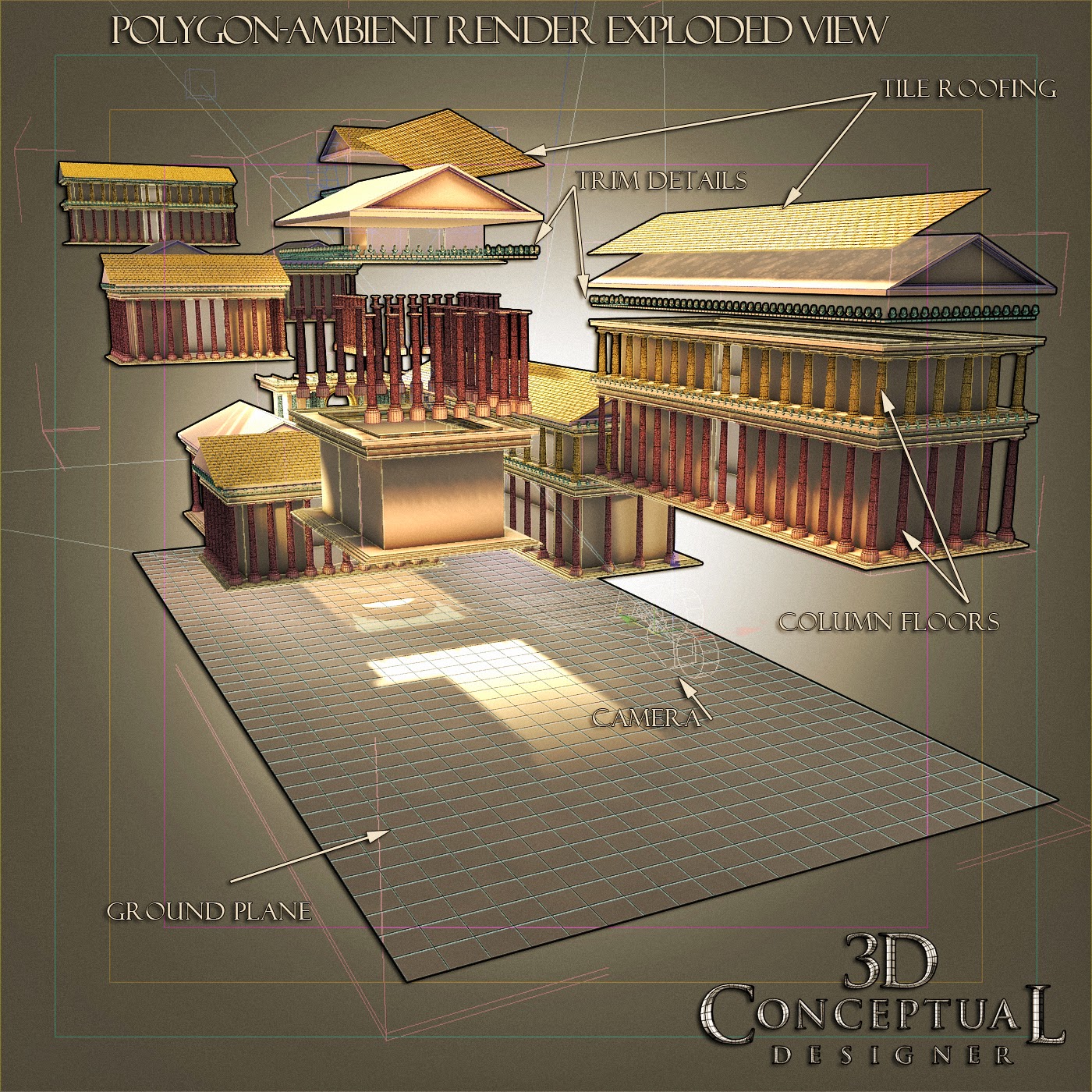 An exploded view of the whole scene in an ambient-wireframe render for Pompeii. 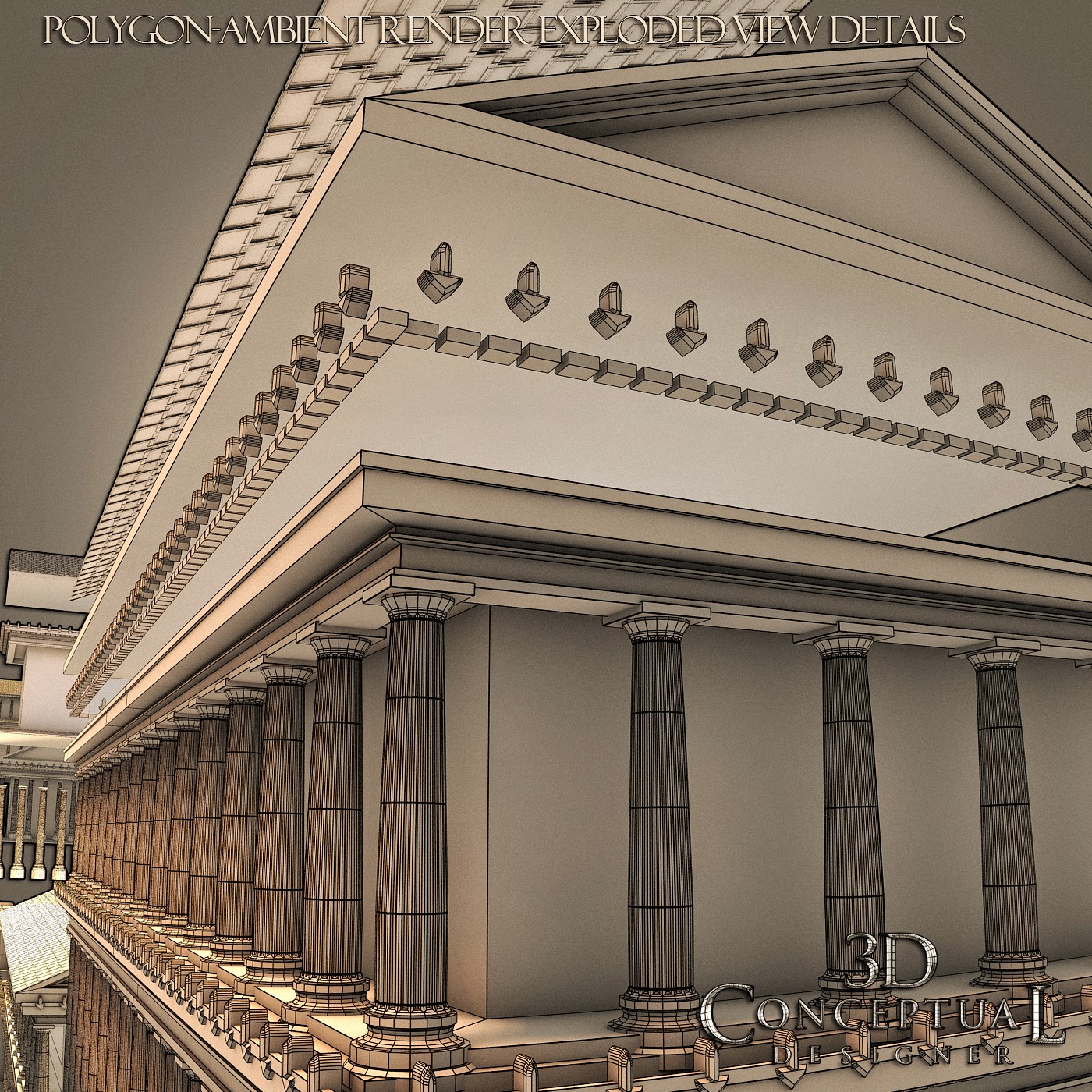 The dental molding and trim were all 3D objects, no mapping. 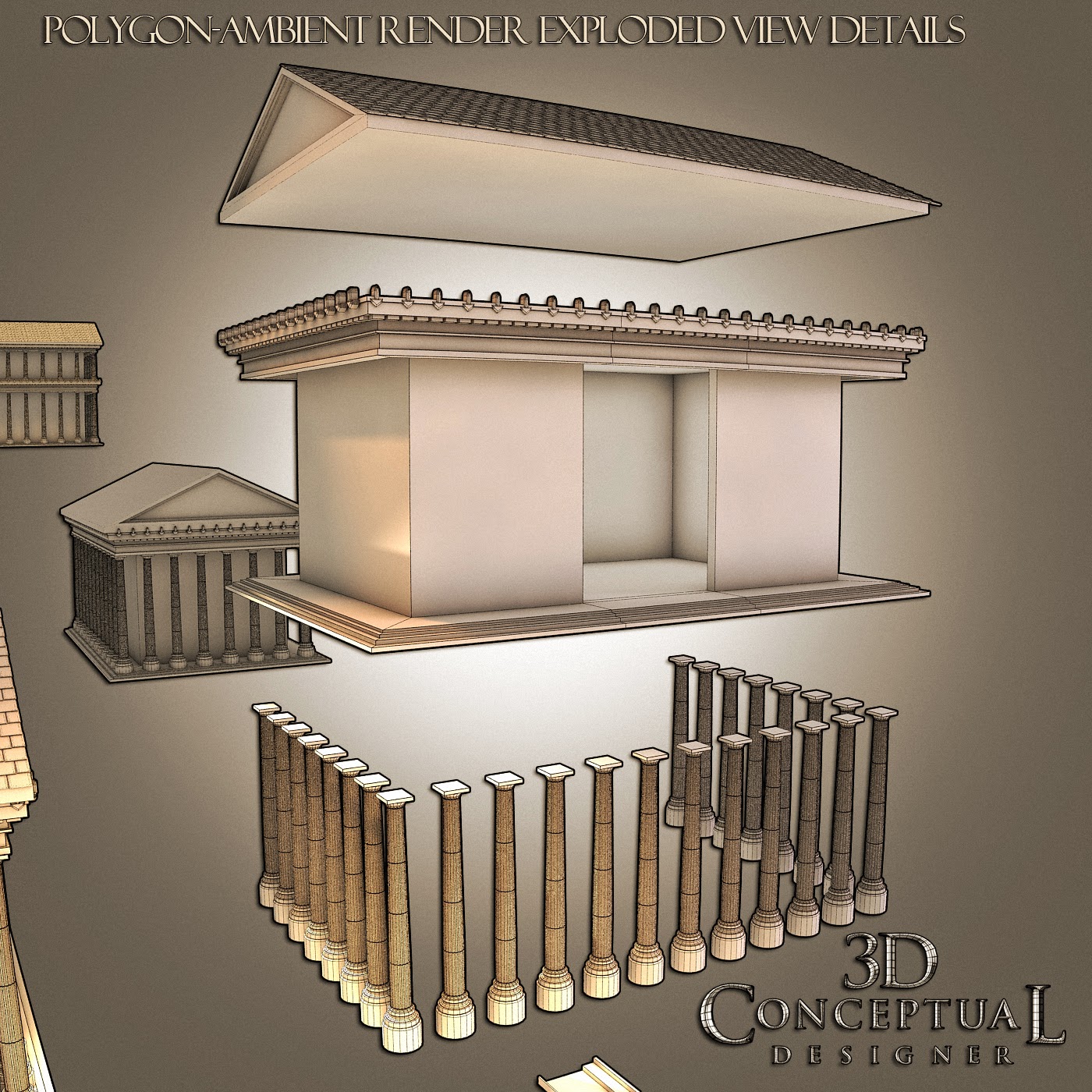 Here is another exploded view 3D render if a base building parts.

Today I am covering PART II in my series of work I did for Gravillis Inc. for the film Pompeii from last year. In this post I am covering a very different comp Idea I built out in 3D with an alley like close up inside the city itself, as the massive volcano erupted in the background.

I built out higher resolution parts for this shot and re-used a few pieces I already had in my 3D Model bank to set this shot up. Once again, I had a very compressed one day schedule to meet to get a big render to them by EOD[ End of Day].

By the end of the day, I had this come wrapped up and delivered as promised.
You can view PART I with a high overhead shot of the entire city built at a low to medium resolution here.