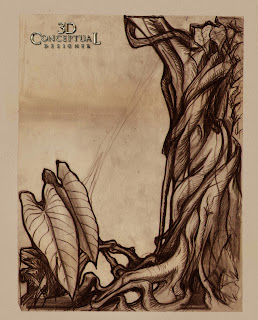 Here is the original sketch I did on Thick Tracing paper at 9" x 12" for the front Overlay of the Jungle for the Promotional Package for The Phantom 2040 we used to sell the series to ABC. 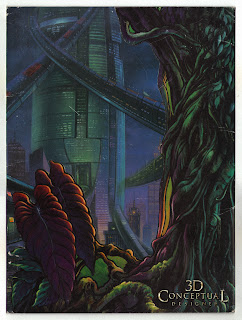 Here is the final Packet folder with the layout expertly painted by June Miko and Jesse M. Santos, two of the Layout Background Painters on the team.
You can view the layout for the futuristic styled building here. 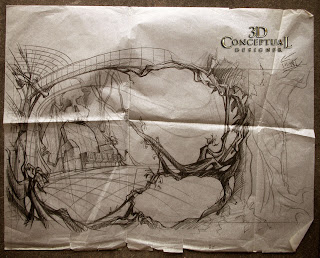 Here is the very large[ so I took a pic of it] layout I did for the inside double spread which was the interior of the Phantoms Cave, it is 18" x 24" approx. 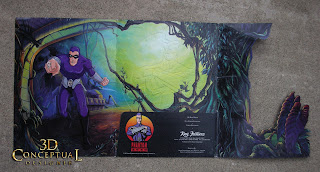 A shot of the final opened up Promotional Package from The Phantom 2040.

This is my 108th post covering the Conceptual Design and Art Direction work that I did for the TV animated series, The Phantom 2040 from in the early ninety's, and I've scanning in some added background Layouts that I did specifically for the promo packet to sell the show.

I mocked up the little packet and began these layouts within the first two months that I was on the show back in 92', and I used two background painters from the show, June Miko, and Jesse M. Santos, both excellent painters for the task at hand.

I loved doing the plants especially, since I was able to get the wrapping and interlocking theme into the shapes right off the bat with the vines and leaves , following the look of Art Nouveau artist Alphonse Mucha.