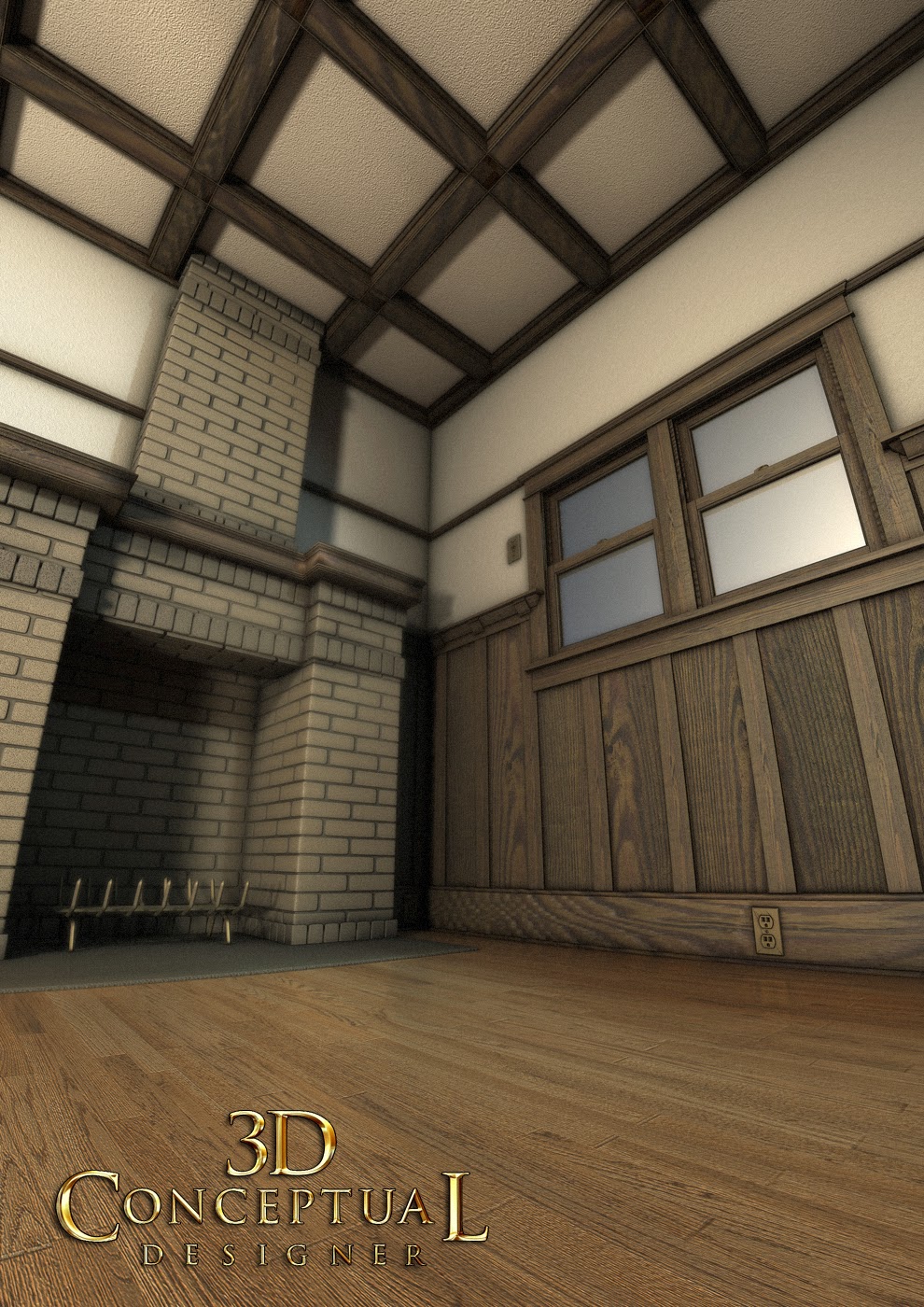 My First pass at the Virtual Living Room 3D Deign and build for Key Art for the Nickelodeon Special Santa Hunters 2014. 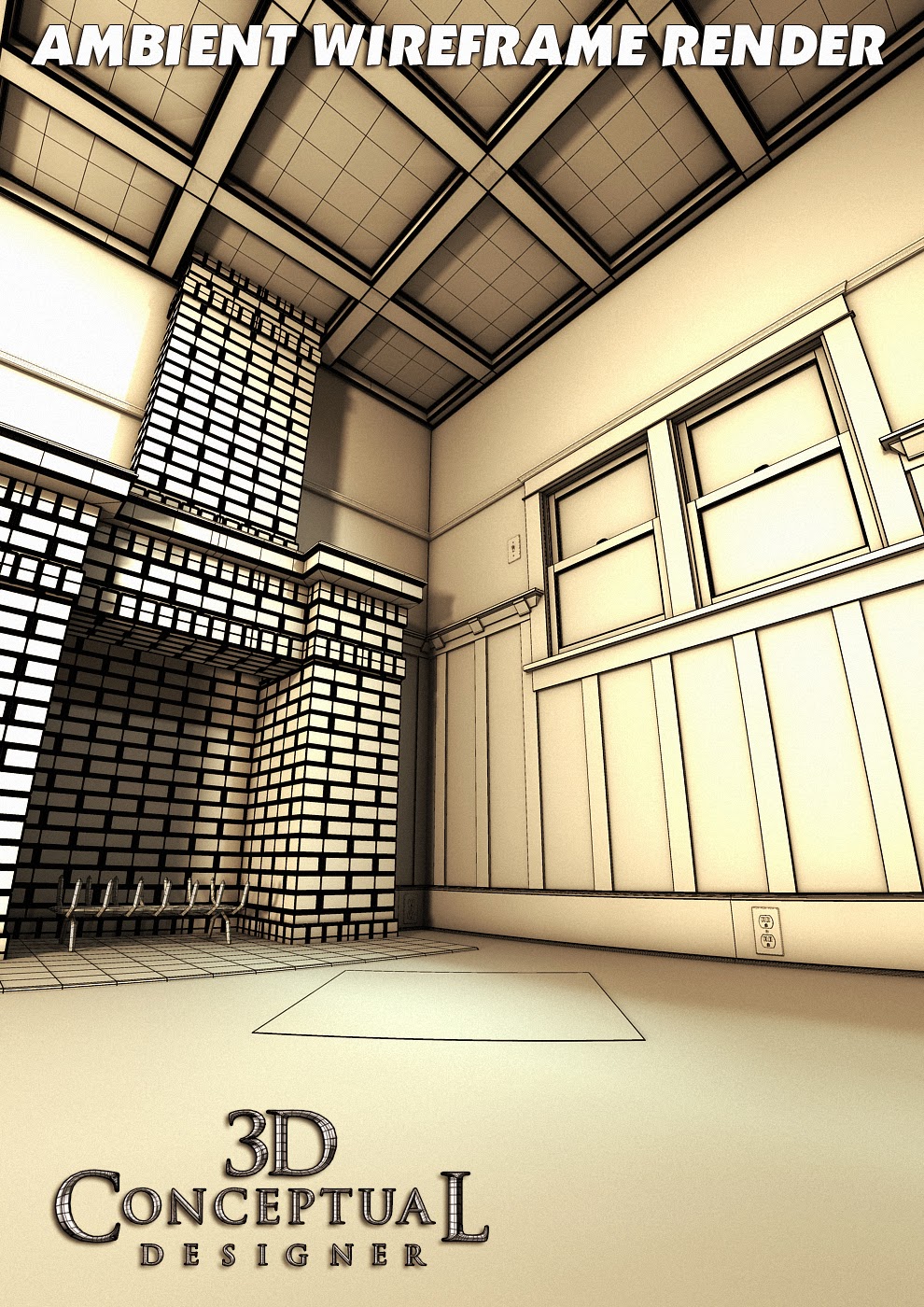 The wireframe ambient render shows a combination for subdivisions in the fireplace bricks, and standard primitive models for the rest. 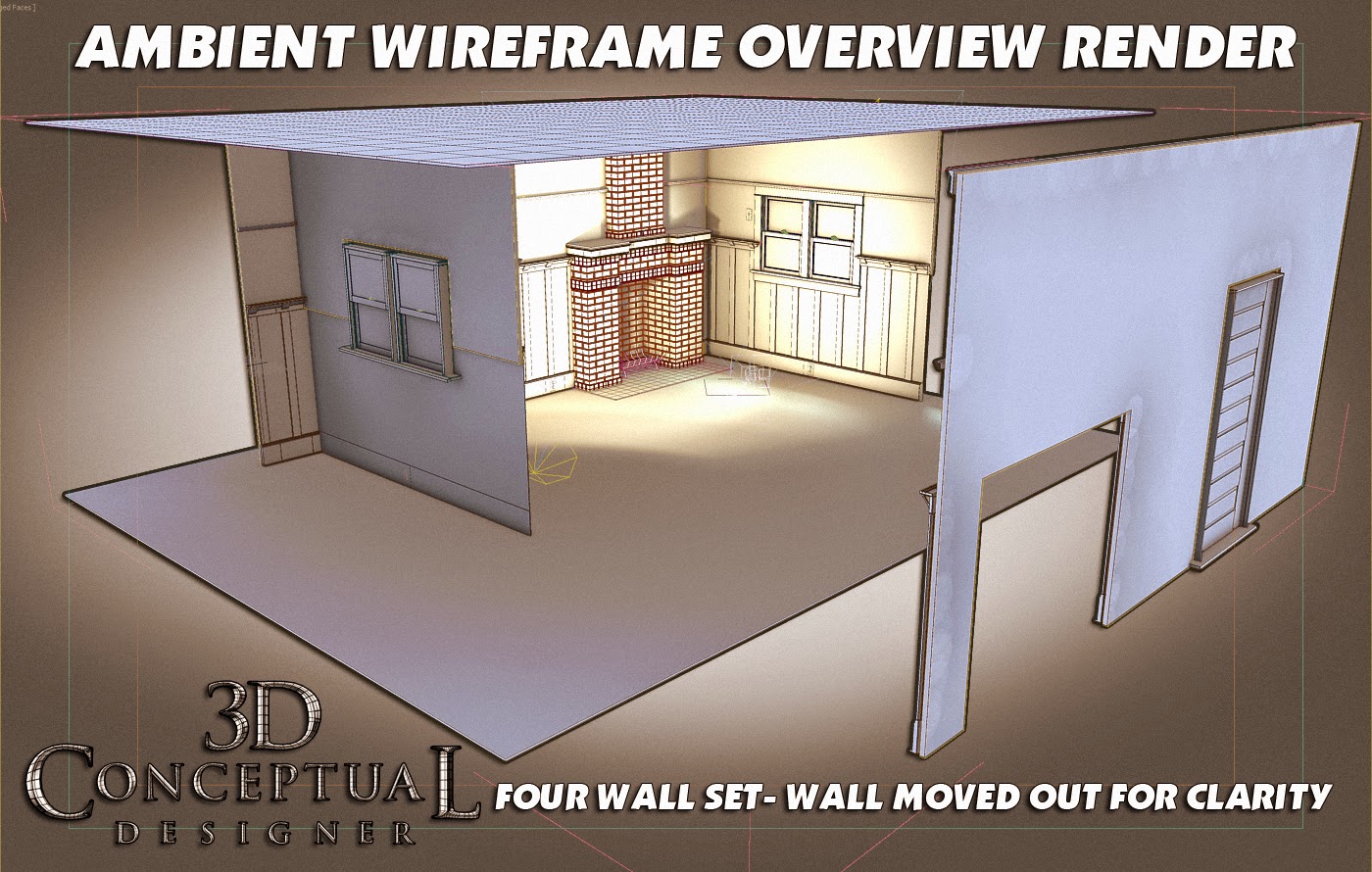 Here is an outside shot with the back wall moved away to show this fully enclosed 3D set. 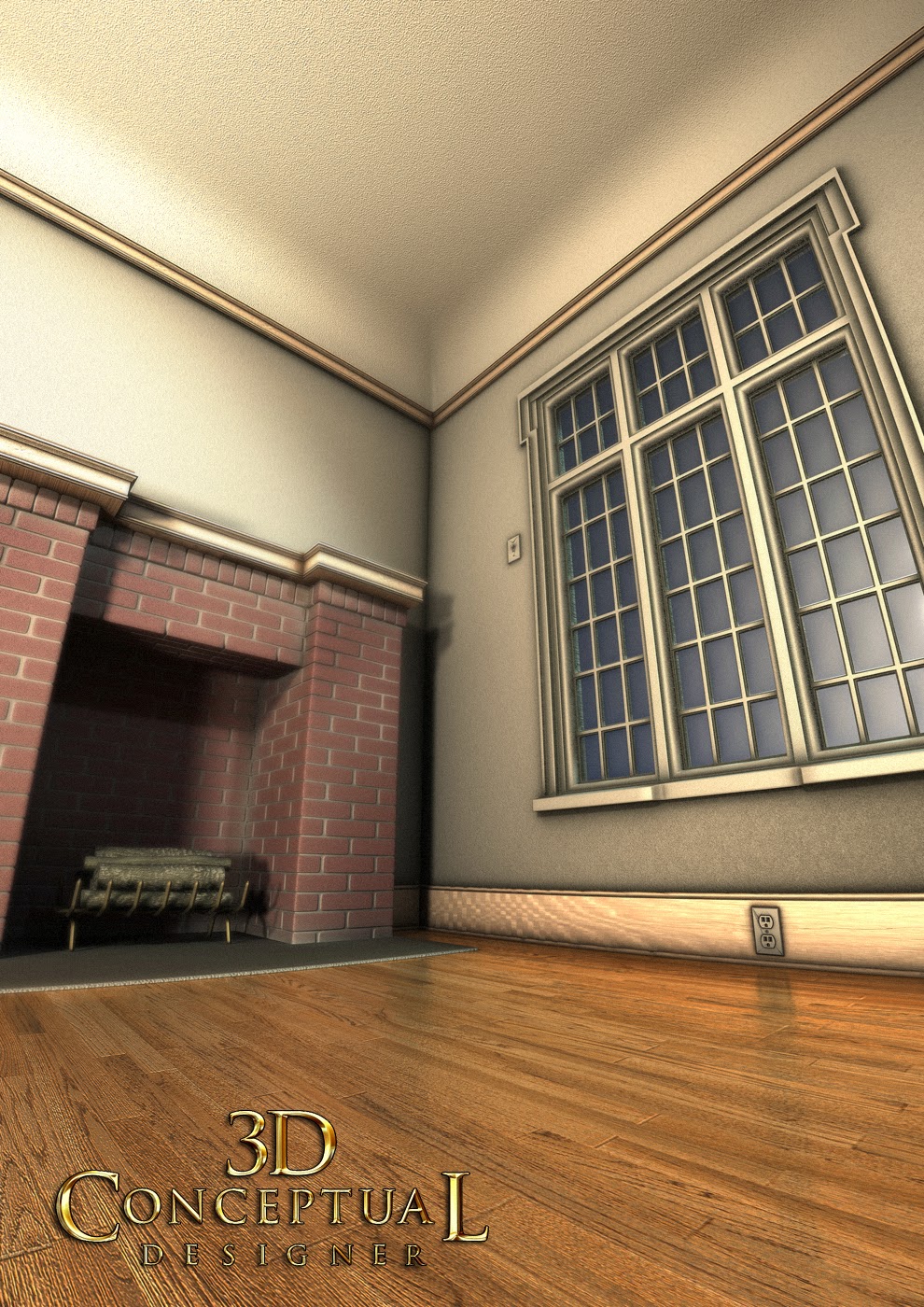 The second phase in the 3D Design, lightened up the room, and changed the era to the 50's and 60's, this first render closely matched the original sketch angle.
I also added some logs into the fire. 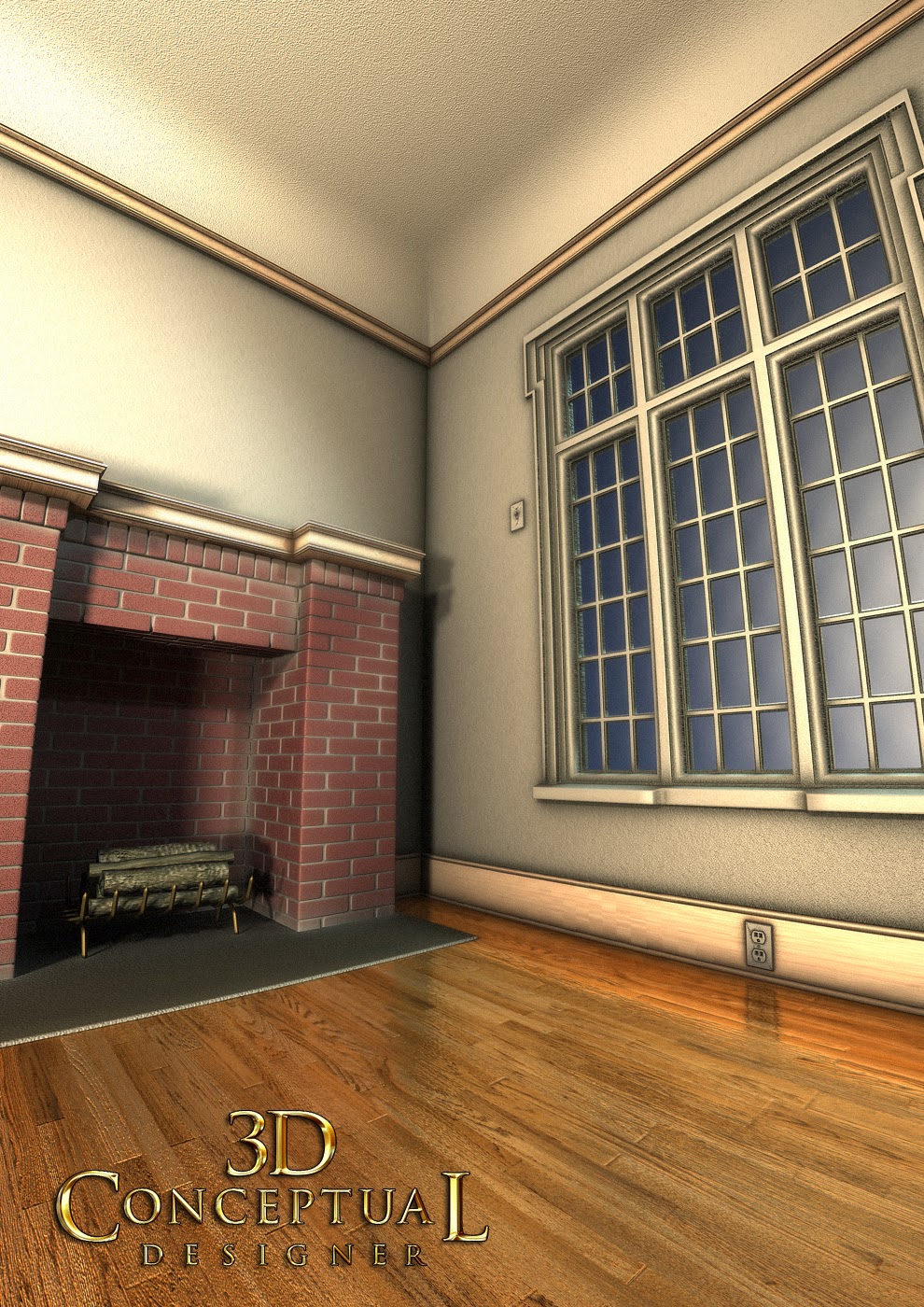 Round 2 had the camera change to a higher lens to get the extreme angle on the ceiling a bit less. 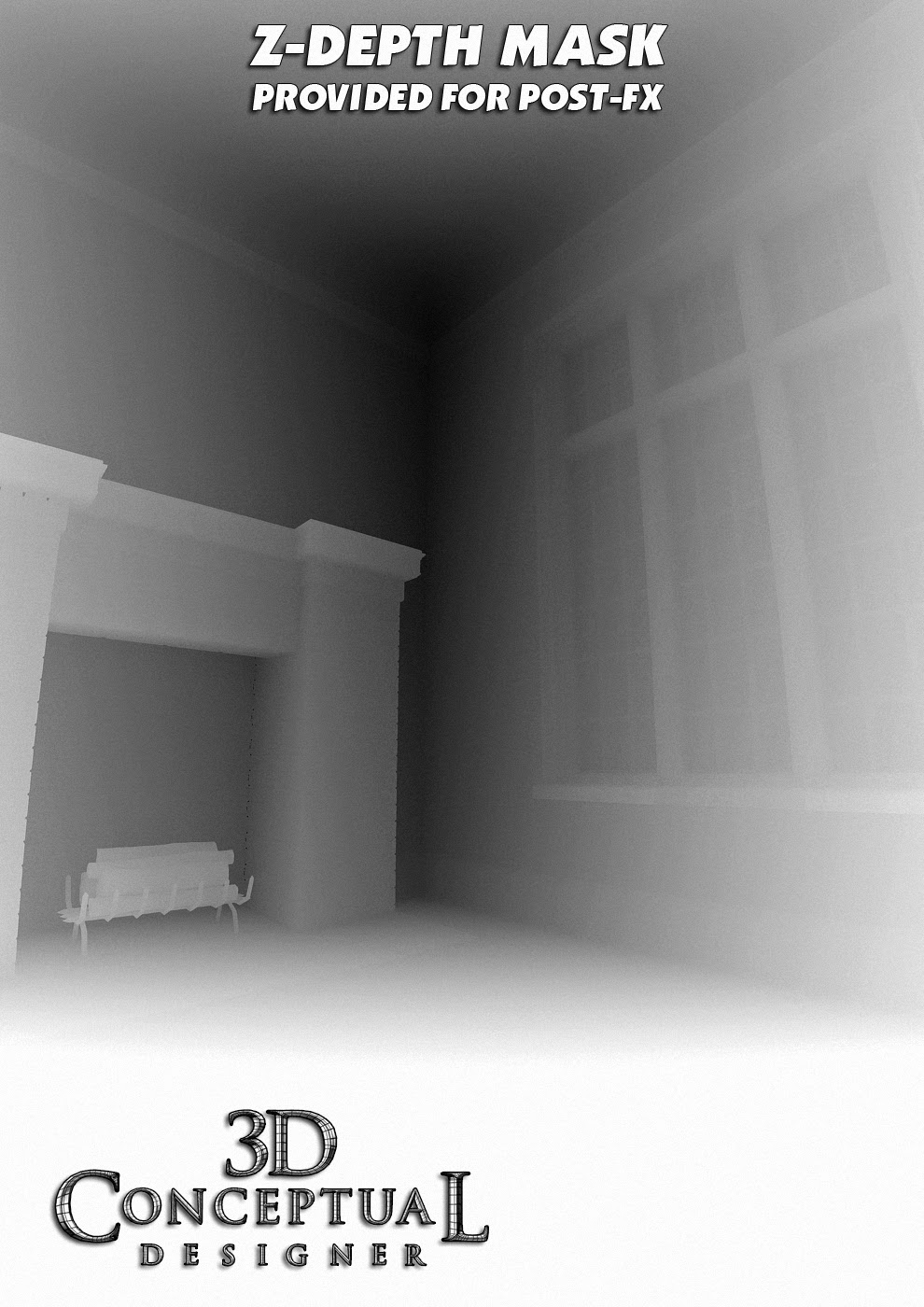 All 3D renders are supplied with a Z-Depth pass so the Art Director and finisher can grab pixels based on distance to add effect into post. 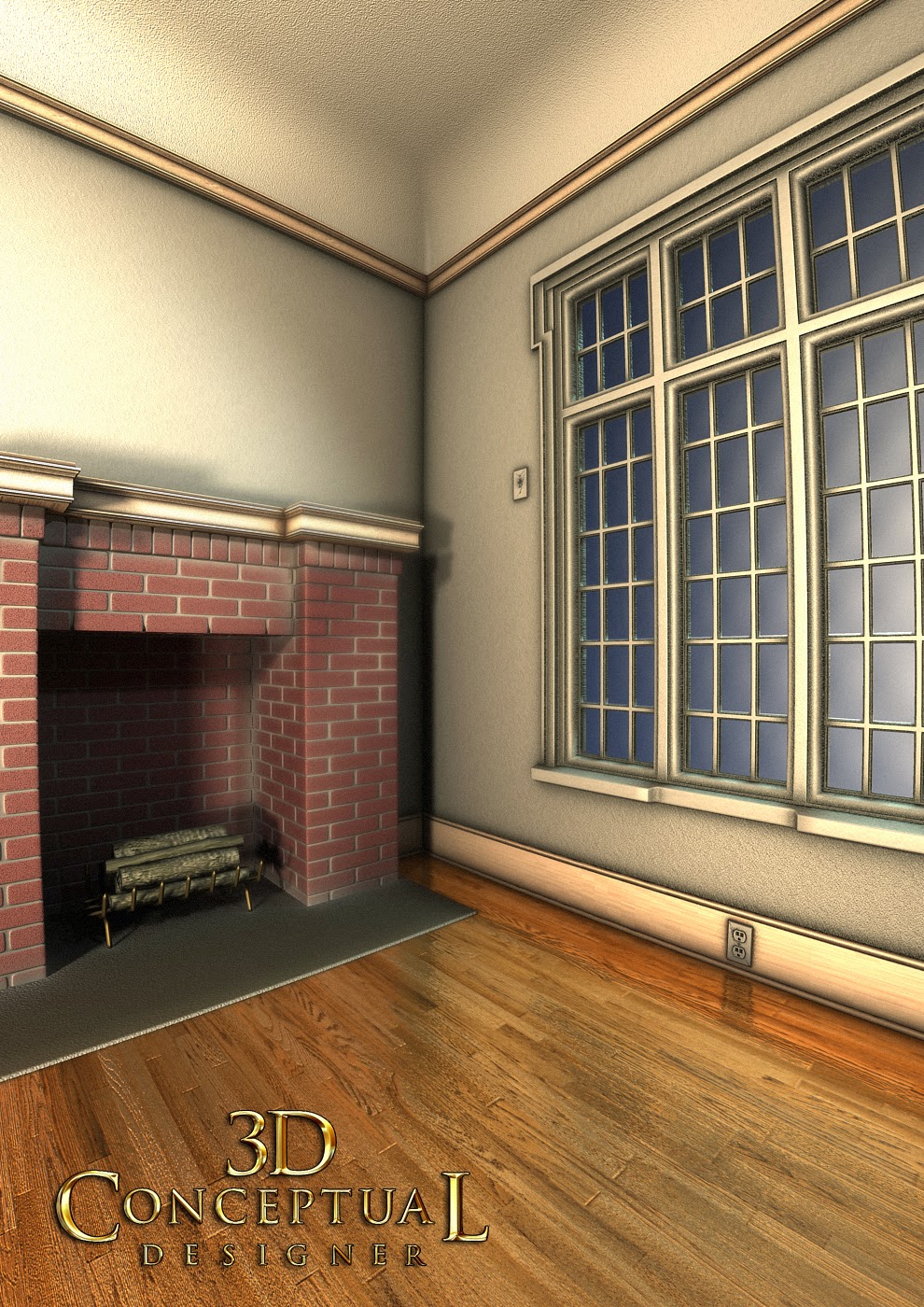 Round 3 has the camera now level with the floor as seen the the fireplace side. I added curvature to the lens at this point at about 22 degrees to get a bit of a fish-eye look. 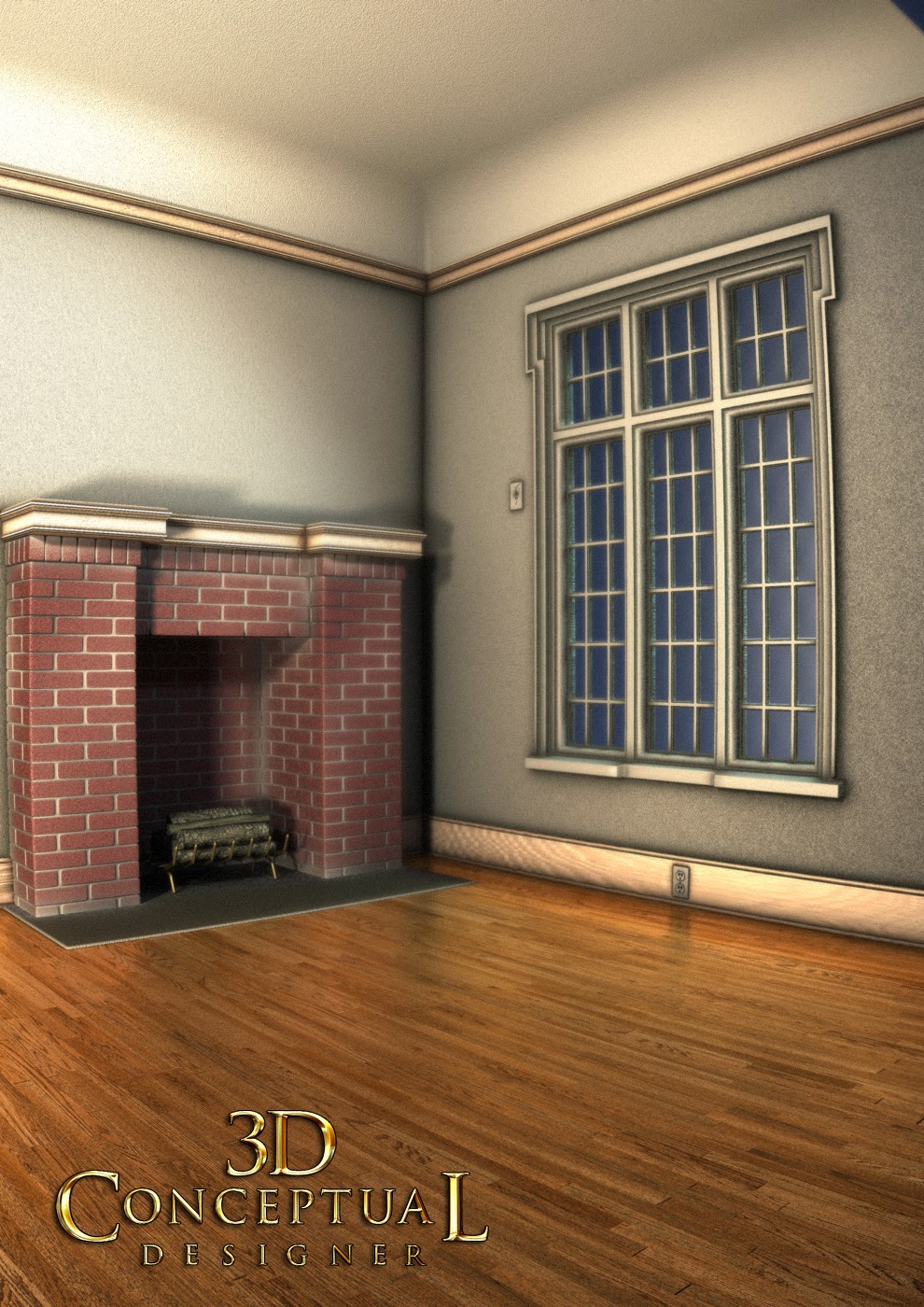 Round 4 here is what went to finish. I had to remove the back wall as the camera was moved thru it, so this became a 3 wall set set up as I had done back in my set design days. 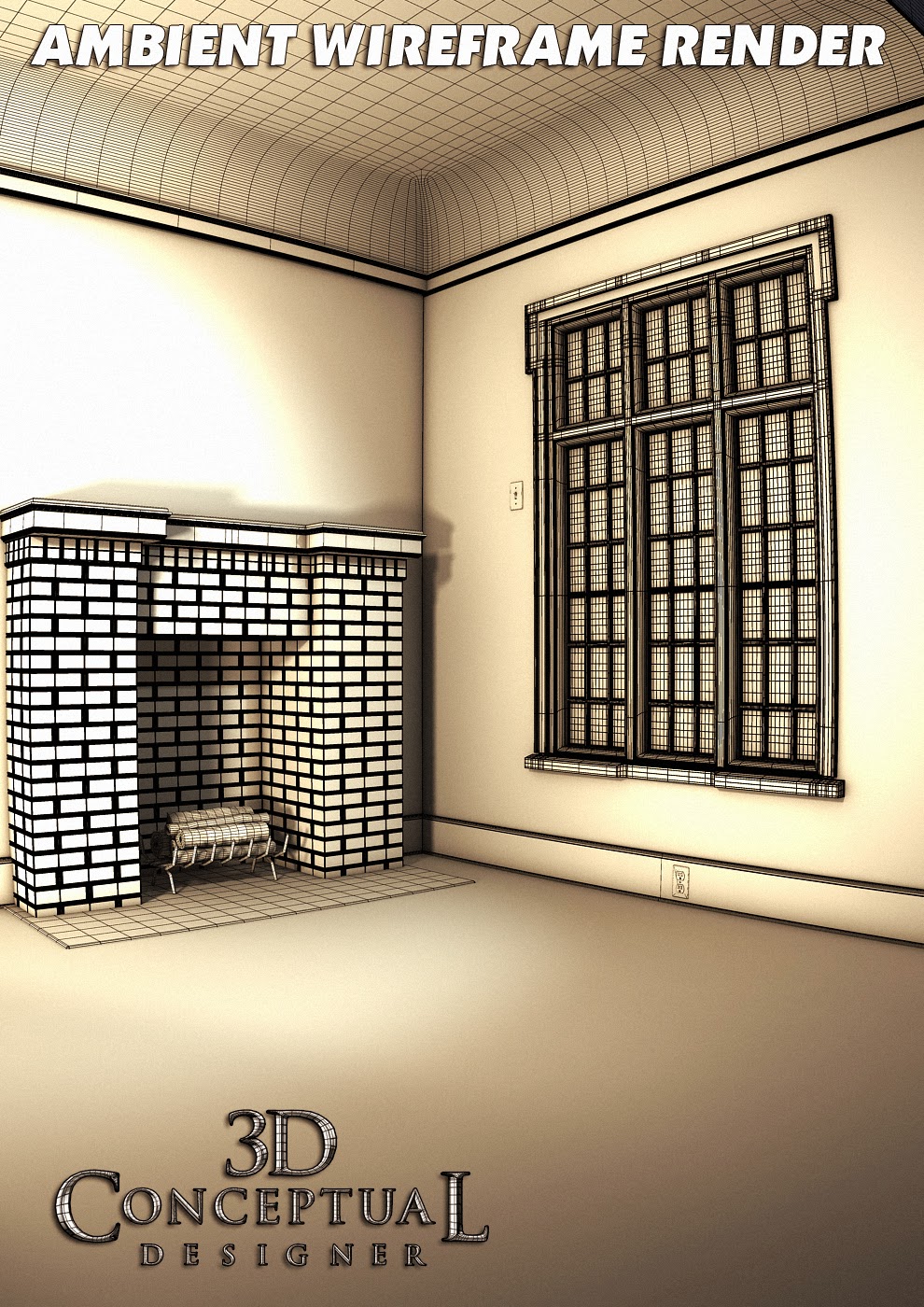 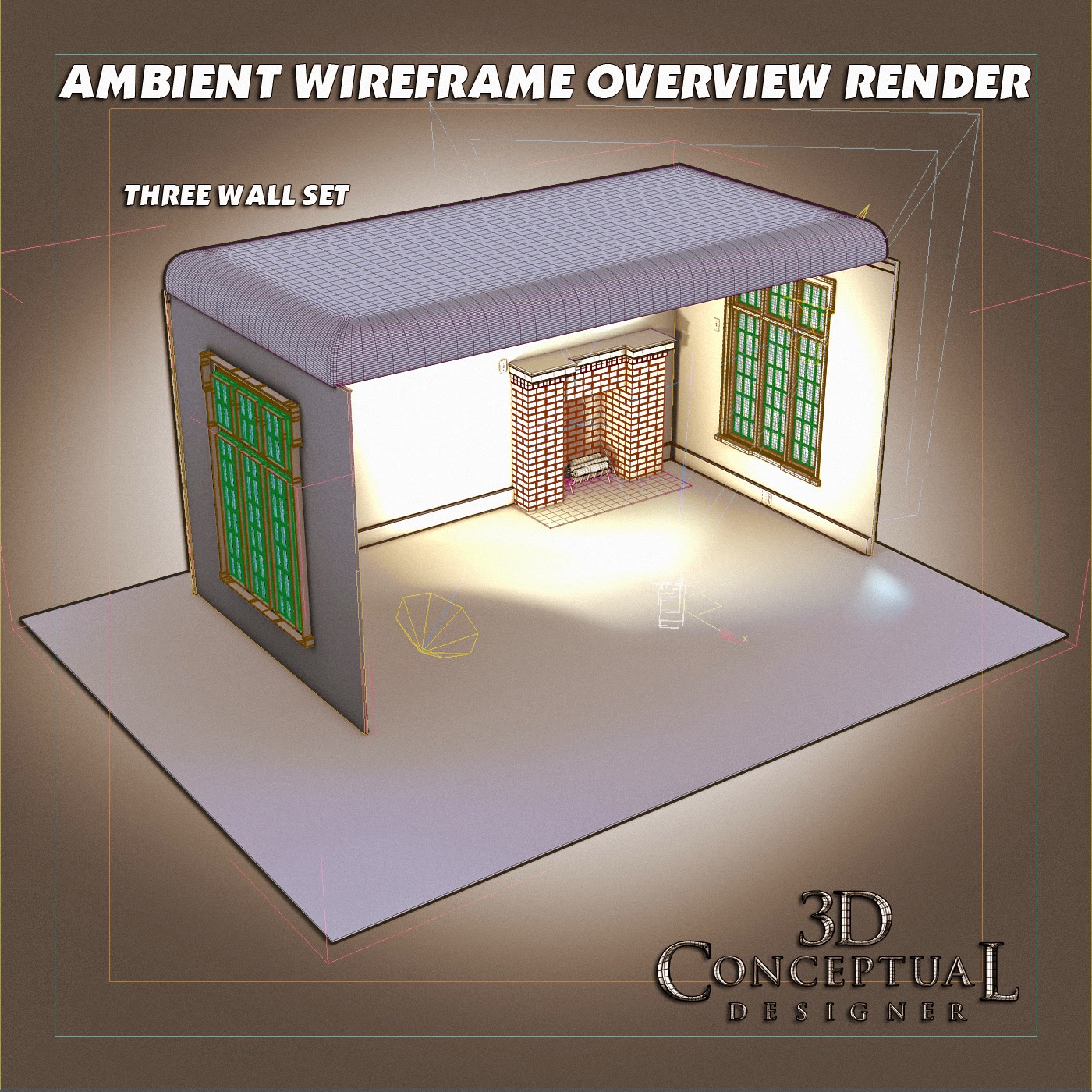 An overview render from outside this set. 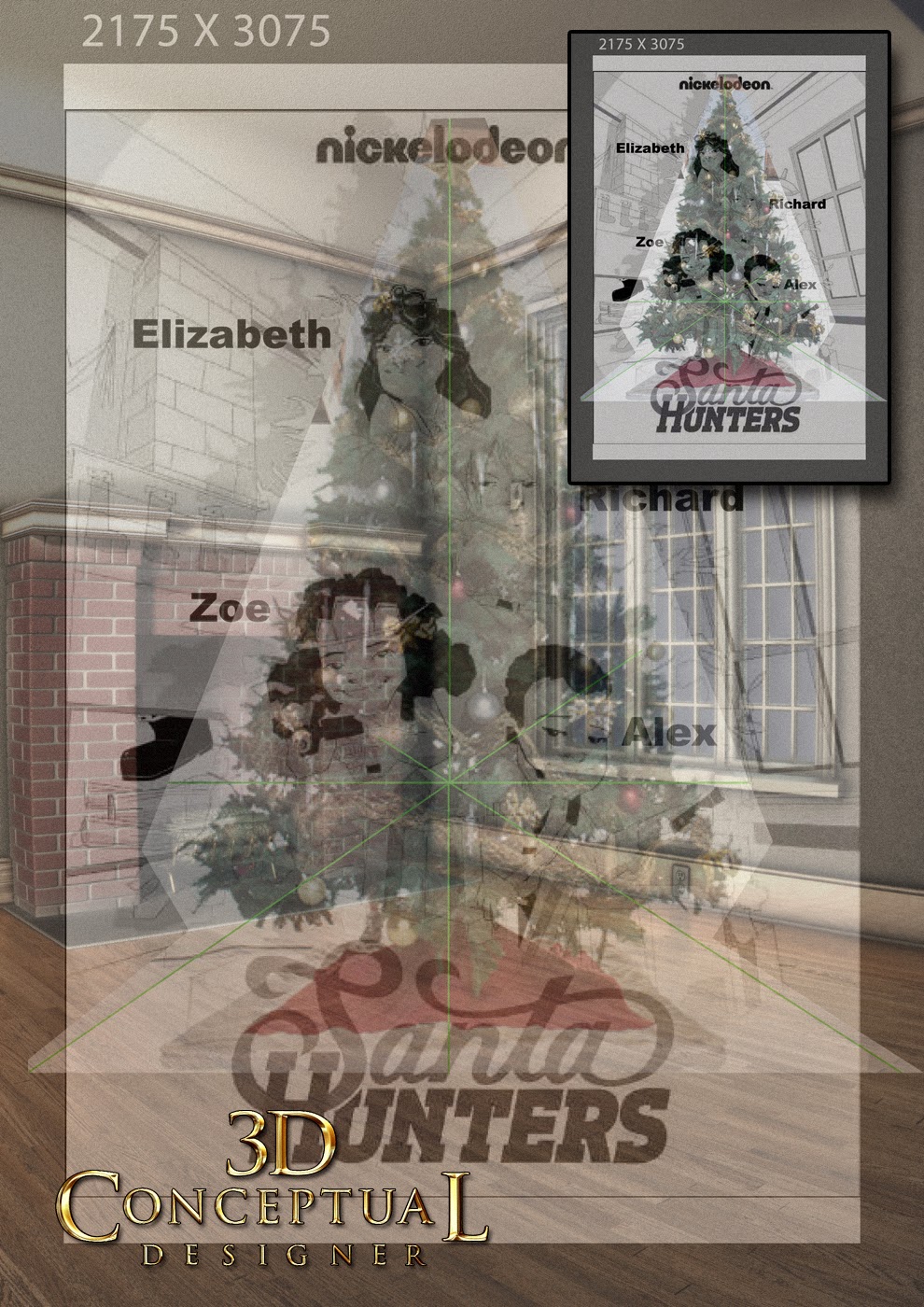 Here is the scrap shot given at the start overlaid onto my final render, with the bleed provided.
I always add bleed to my renders that are edge to edge 3D, since once the camera is locked down, if they want to see more bleed,  it moves everything in the scene around due to the parallax that takes place with any 3D move of a camera.


I early July last Summer, I was contacted by Buster Design to build out a Virtual 3D shot of a Living Room, for a Kay Art poster for Nickelodeons upcoming special, called Santa Hunters. I had done work with Neville Burtis in the past and was referred to this team to assist.

As with most Print projects in the Theatrical Advertising world, they needed this fast, so I utilized my huge 3D library of parts that I have had made over the last two decades to mock up a room quickly.

I had built out a test room hallway of a Mission styled home[ based on my own home at the time in So Cal], so I had door windows picture rail baseboards and all the fixings for a room. I also grabbed the Sub-D bricks I had built for Don for the old Ford Architectural build to create a fireplace w/o mapping the brick with actual 3D mortar and mocked up a historic room.

Turns out once they saw it, they wanted to go brighter and bit more of a 50's and 60's "Burbank' styled look, so we swapped out the beamed ceiling for a cove one, very typical to that era, and changed out the fireplace and window trim design as well.

Once the look was locked we dialed in the shot, so you will see various camera lens swap outs and height changes. I originally followed the sketch seen above, but it ended up with a much more straight on shot that did go to finish.

You can see the final done at Cabalastudio over here.

Cheers, THOM
Posted by 3Dconceptualdesigner at 10:57 AM