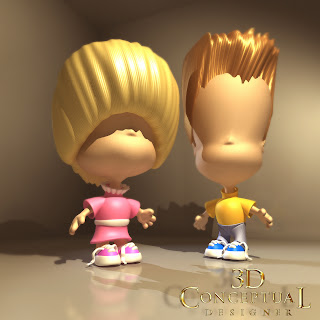 Here is the main shot of the 3D Characters I designed for Ricks Kids, 2D eyes and mouths were added latter. 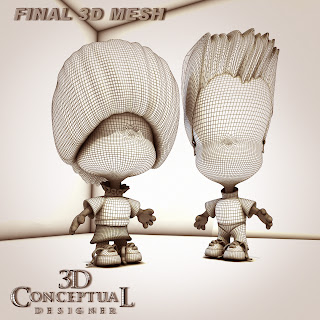 The final Mesh was almost no subdivision sans the hands as I was just learning the technique better back in 2001. 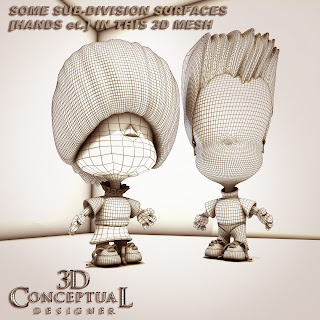 In this low rez shot you can see the hands and heads were Quads, along with a few pieces of clothing. 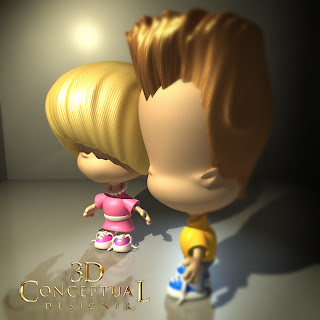 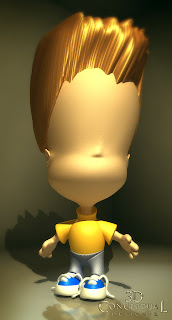 The boy 3D Character I designed out here is seen alone 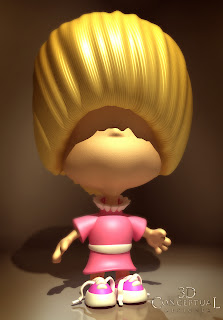 The little girl 3D Character I did for Rick Lynch at BLT.

Today I am posting a little project I did for Rick Lynch at BLT and Associates with his two children as inspiration for a pair of 3D animated characters called appropriately, Ricks Kids.

I had worked on The Phantom 2040, and The New Adventures of Flash Gordon at Hearst Animation so I was apt at putting together a pitch package for a show concept, adn this work was the visuals for that project.

I built out each "kid" model in 3D and experimented with various looks to them. This was before fur-n-hair shaders were built into 3DS max so the hair is designed as a single sculpt.

I originally designed a few eyes and mouths but Rick decided he wanted to sketch those assets in the finals himself, so they were left to 2D and not added from my end at all.
I have half a dozen Rick Lynch projects that I will post over the coming weeks.

Cheers, THOM
Posted by 3Dconceptualdesigner at 12:00 AM