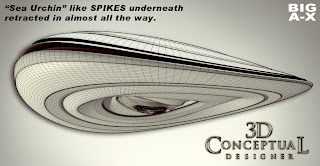 I bulked up the front to give it more mass like a raindrop shape, as well as adding a lot more louvered layers that made up each surface both top and bottom on this mother ship concept I designed. 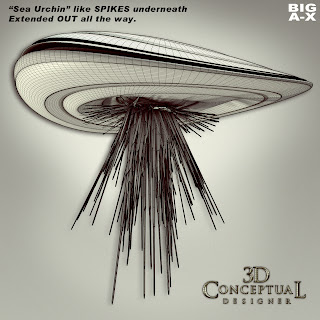 In open mode with the spikes shooting down and out from the bottom of the craft. 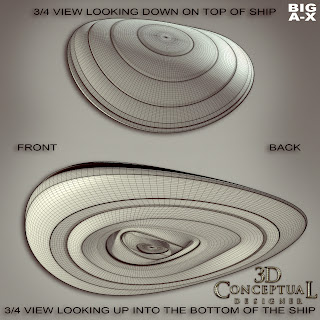 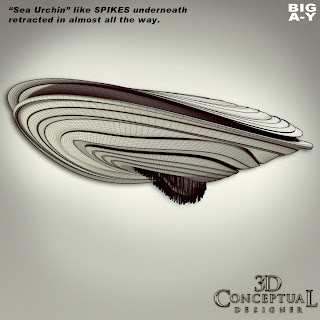 The second design was weighted to the back and a bit curved in the side. I emulated a blue whale in the ribbing on this design and we put the spikes back in , though I went a bit farther in this second concept. Here is the second version with the spikes all out in a large mass spread out over a bigger area of the base of the ship. 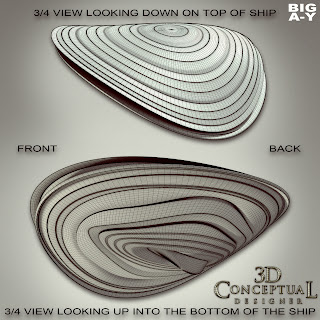 Here is the two shot of the body concept for the second alternate design.


Today I am posting for my Wednesday 3D post, part three showcasing my design project from just over a year ago in the Summer of 2011 that I did for Steven Viola at Method Studios designing spacecraft for a teaser TV spot.

I have already posted parts one and two, covering the first two concepts I did for the project, and today I am jumping to a 3D exploration that I did with adding details and refinement to the 3D blocking model of the design A.

These models were the base models I build for blocking them out in 2D, and for this second part I developed the geometry and surfaces even further.

We also experimented with the spikes that would grow out of the base when the mothership was going to attack, transforming the silhouette drastically in shape, and screen presence.

You can review PART I here showing off Design A in two versions, and PART II here as well. I will have one more post covering the final "C" design that will go up at a later time.