The First Pass at the Title treatment back early on when the film was proposed to be called Shark slayer, but they removed the slayer as this was a children's animation.

The Second Title tried was "a Shark's Tale" but they ended up taking of the Plurality.

The final Designs I did in 3D prior to my departure over to The Cimarron Group, was this last Title rendered at a HUGE 9000 pixel wide finish, where a typical One-sheet Logo final is 4500 pixels wide. 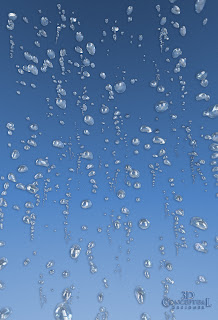 A sheet of 3D Bubbles with the animation standard of a little four-pane window reflecting there under the water....:o) 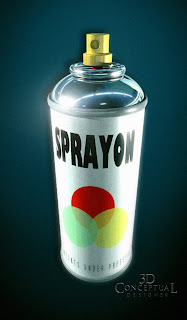 Here is a shot of the spray paint can for some comp ideas early on.


This was one of my final projects back in the fall of 2003 when I was still the in-house 3D design department at BLT and Associates. I had done quite a few projects for Warren, as he was the third Creative Director that I had worked with back then, so he put me on 3D Logo development for the film posters.

When often begin a title treatment for a film that is still in script form, so a lot will change, and in this case the actual name of the film changes three times while I worked on the Theatrical Advertising campaign. It started as Sharkslayer, then was changed to, "A Shark's Tale", and it ended up being named "Shark Tale".

I built out the text a few times with the letters gimballed about 3 degrees so the right edge of each letter overlaps the next letter. I did a few variations of each, but the sharks"fin" in the title's letter H stayed the whole time, as the producers loved the fish in the "O" in the logo for the Pixar film, Nemo a whole bunch, so we added in a few sea creatures into the fonts.

I also did some cartoony - realistic bubbles with the typical " four-pane window reflection in them[ No windows under water], so they were a stylized overlay that the various Art Directors, and Creative Directors could add in bubbles into the comp ideas.

Cheers, THOM
Posted by 3Dconceptualdesigner at 11:36 AM