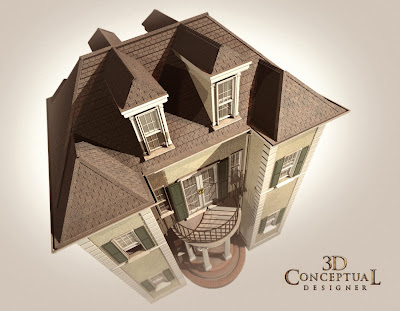 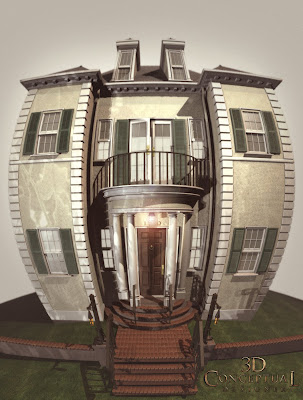 The "Fish eye" camera fake done to the geometry itself by using a deformation to stretch the house out, done for My Boss' Daughter theatrical poster designs. 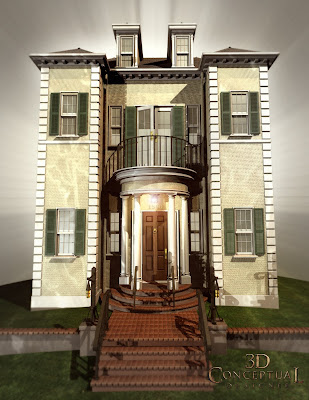 Here is a ground level shot of the standard 3D model I made. 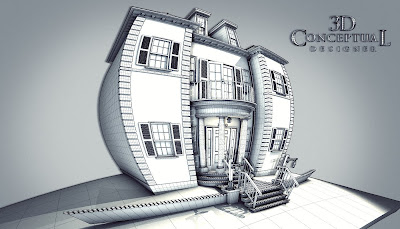 Here you can see where I added segments to the house model to 'inflate' it with a deformation 3x3x3 in 3DS max. 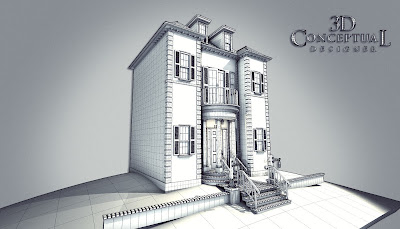 Here is the same model with the FFD removed. 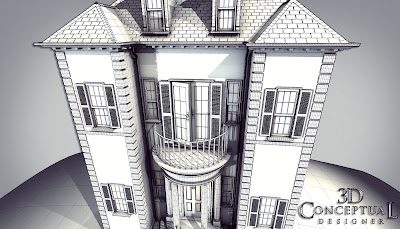 I built most of the parts[ not texture mapped] including the shingles bricks and window moldings for the film, My Boss' Daughter back in 2001-2. 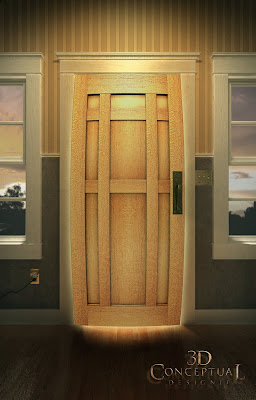 Here is the stretched door comp I rendered out in two layers so they could fill the doorway with EVERY cast member in the film, never seen that!


My Boss' Daughter
3D Virtual Sets of the House inside and out.

Originally called "The Guest" starring Ashton Kutcher, and Tara Reid, this was an early project for me at BLT when I began a decade ago doing 3D Illustration services for theatrical print applications and standard advertising. For this project I was to make an Iconic home from the film to use in the3 various comp ideas. I worked with a large team of Art Directors on this as it stretched over a few years with a few title changes in there too.

I built the house to "inflate" with a 'Free-From-Deformation'[ FFD] in 3DSmax, to give a real "Fish-Eye' look to the final renders. What is nice is my renderer, Final Render, has this lens in it and the process does not always require to adjust the model where it can now be inc camera.

I also built a door that was bulging out, as that comp had the typical 'dozen people coming in the door at once' idea used about 1000 times before. As a side I went to The Cimarron Group a year later and they had a poster with an inflated look to the door and spent $5000.oo getting a prop made and photographed. My door would have cost them about 1/10th that, and today even less, as I got fast in 10 years.

Posted by 3Dconceptualdesigner at 12:10 PM