A 3D Metal Logo with flames reflecting in the steel done for the first film in Resident Evil's series back in 2001.

Here is the same model rendering in a blue-steel look with a bit of roughness on the surface.

A gritty rusted look using the Procedural Texture I made in Dark Tree.

A "Kubrick look" for the 3D Illustration, with the bright light blasting out the font into energy. 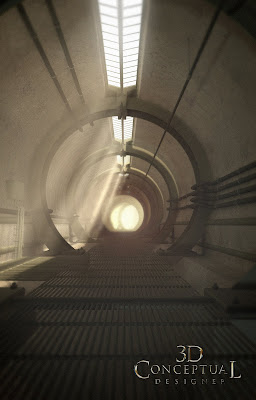 Here is the final rendering I did for Alon for the background with the iconic tunnel in it. 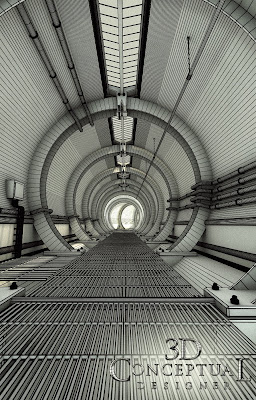 Here is the quad model that I built and designed for the shot. 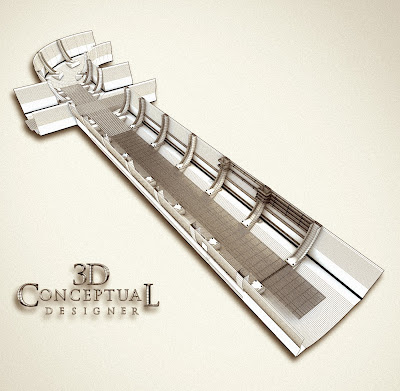 This shows the depth of the scene that I built for the above tunnel scene.
[ cut away in half]

A very early project once I came in-house to run a little 3D Department for BLT and Associates we as to do some 3D Logos' and a virtual set for the new to film adaptation of the video game Resident Evil starring Milla Jovovich.

Tomb Raider is always a look that was asked for by about every client we had early on, a typical two layers brushed on top with a gold larger holding device below, with modifications. For this round we even used the similar fonts for presentation.

I also did a tunnel as a 3D illustration, or Virtual Set, for then Art Director Alon Amir. I designed and built this out, and this was a very early project I did using the new to them GI rendered Final-render from Cebas.
Cheers, THOM
Posted by 3Dconceptualdesigner at 11:32 AM