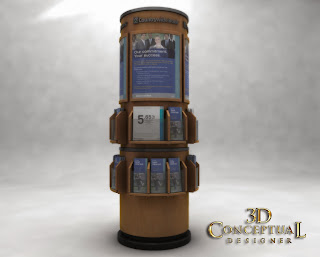 Here is the primary final Kiosk design done in all wood for Countrywide back on 2007. 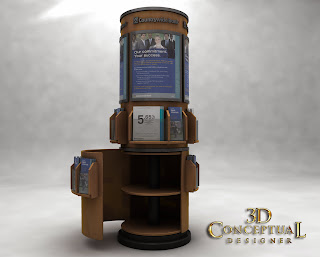 Here is the shot of the Kiosk 3D Prototype with the base storage area opened up. 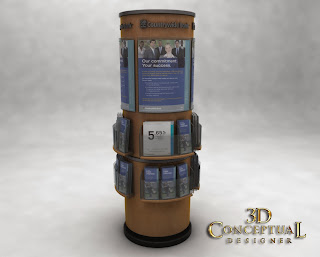 An alternate with metal frames on the big posters up top. 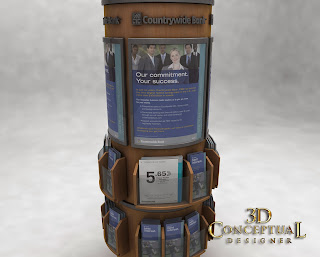 A close up 3D render of the pamphlet storage details in the free standing Kiosk design. 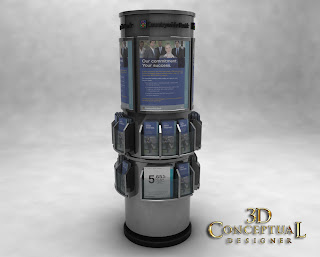 I was asked to do an all metal version as well, as some stores used laminate brushed aluminum so I did this alt version too. 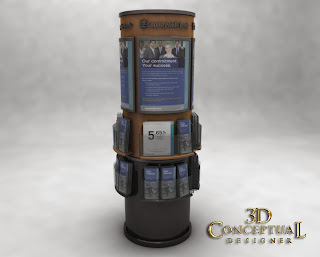 This was a half wood up top, with a metal base combo design version. 3D really assists in this as the alternates take little time to do. 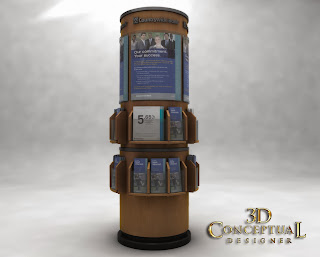 A variation with different frames on the posters. 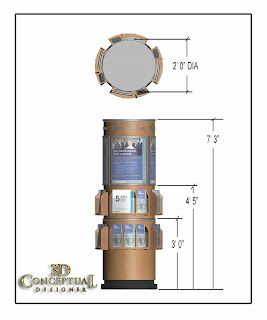 I rendered out this ortho view to get base dimension back to the architectural team at Countrywide to put into the plans. 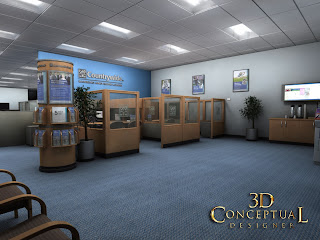 A shot of the Kiosk inside a Countrywide Store. 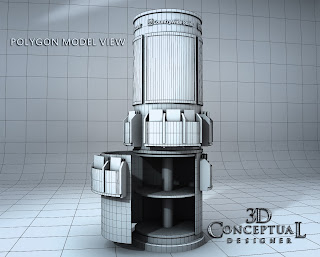 Here is the polygon mesh view showing the build itself.


In this, my second posting on the 3D Architectural Visualization I did for Countrywide back in 2004-2009, today I am covering one of the many Kiosks I helped to visualize for them, and today we are looking at the free standing round Kiosk Design.

One of the great advantages to 3D visualization is that the client can see before they build what the design will look like, and in most cases the folks who write the checks, need this service to assist in the bidding process.

I was given the architectural plans for a square Kiosk and was asked to create a few variations and this round version was build out in 3D as an Architectural visualization asset to present to the CEO of the company. Once I had it built out, then the variations were fast, as the base objects were created and lighting and textures were ready to go, so I quickly adjusted the various parts and materials to reflect the options they wanted to show. 3D really is the most cost effective visualization method if you want to see many versions, as sketching this would be a new drawing for each concept.

I did a version in all wood, wood+metal, wood+metal+glass, and a wood+glass version. I also built out the internal parts as well and linked it up to open up the storage area below to show the effectiveness of the design.

A free standing Kiosk, or Point of Sale Architectural element, and I will be posting the rest of the designs in the next few weeks.

You can view PART I here with the basic store visualization I did.