A rounded bevel and holding plate, but no deep extrusion on this Monty Python 3D Logo. All letters overlap and are rotated to read.

Here is the above logo extruded back into space along with a dropped camera angle to accentuate the depth in the 3D Logo.

I did an all red version of the Monty Python Logo as well using a dirt shader to darkened and age it up a bit.

I also was asked to go back to the first top concept and do a straight on with deep extrusion version as well. This 3D Logo version I did almost made it to final. 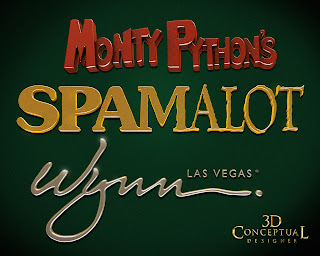 Here is what finished as final: The Monty Python  3D Logo, the SPAMalot 3D Log, and the mark for Wynn Casino.

A little pick-up was to do a web tag to match the font in Monty Python so I built this out and gimbaled the letters with this to match.


I did a variety of 3D logos over the years when I was the in-house 3D Design Department of One[ a.k.a.: The One Man Army] at The Cimarron Group in Hollywood, CA, and being a huge fan of Monty Python , when Mary Ellen brought this job to me, I was very excited to take a quick stab at it.

The Logo was locked in , all they wanted to see was a dimensional version of what they had been using for a few years, so I did a series of 3D versions or, interpretations of the 2D into 3D.

What worked well since the original logo was all overlapped text, where the kerning[ spacing betwix the letter forms] was negative, I decided to gimbal the text at 5 degrees to allow a trailing and facing edge to accentuate the overlap, you see that in all the titles I did.

For Spamalot and the Wynn casino, I did simple extrusions with some color modifications. A quick 4-5 hr gig that was a fun solve though whith a locked pallette and design and just over half a day I needed to work fast.