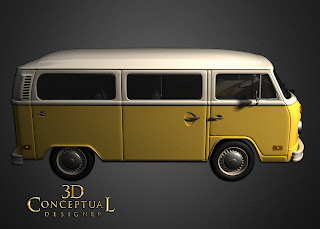 The side view of the 3D Little Miss Sunshine VW bus model as delivered. 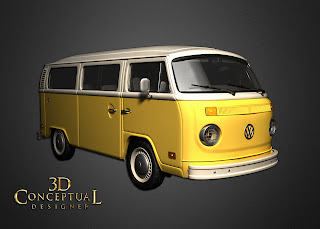 A color render[ never used], to test the surfaces. 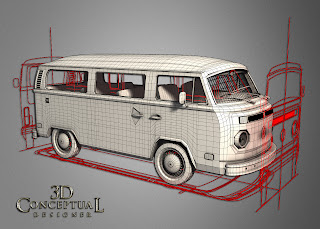 Here you can see the base vectors I create to build from in 3D, here I have four: Front, Back, Top and Side. 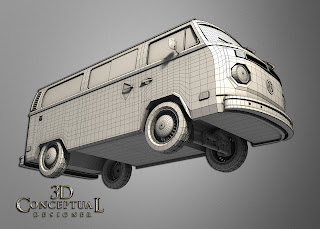 A 3/4 Worms Eye view of the bus, I did throw the front Torsion Beam in their, since this was a head on shot. 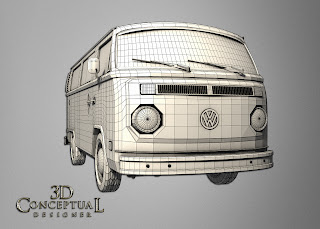 A Quad view of the base mesh for the bus, you will notice the door handles are high rez, they were from Herbie. 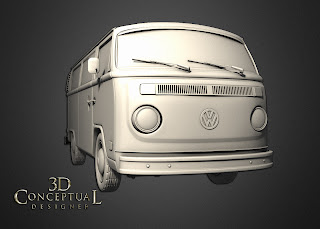 Mesh- Smooth is set at 2 in this ambient render of the VW bus I built. 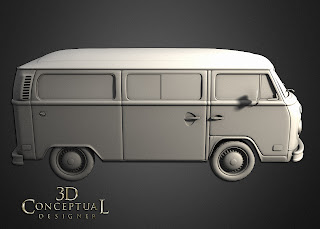 A side view of the VW bus I built for Little Miss Sunshine advertising.[ Note the dent below the door- I ran out of time]


While at The Cimarron Group back in 2007, I worked on a few Cinema Expo presentations for the International Division headed up by John Zaffarano, and I had to build the VW bus from Little Miss Sunshine for an animated piece their own 3D guy was doing.

Here is the catch, I had 8 Hours to do it. Bear in mind a good automotive model from scratch takes about a week, or 40 hours to get a full exterior done, so one fifth that time was a real challenge.

I did have an advantage in that I had built a VW bug for Herbie here, and I could use a few parts from that model for the details here, suspension, door handles etc, but for this one I did all parts as Quads so they could be smoothed once their team took the model. I also have the advantage that I am a Transportation Grad who happens to know a lot about VW's and have owned a Bay Window bus, this same year, so it was from memory for a bunch of this.

As a note, if you look below the passenger door you will see some rippling in the body, and since this was a long shot to a close up on just the front end of the 3D Virtual Bus, and it would not show, and I had only one day to do this all, I was not able to fix it in time for delivery, and that was discussed and expected with one  fifth the time to this.

I loved the challenge of trying to get a car done that fast, it teaches you a whole bunch, on how to run that fast.