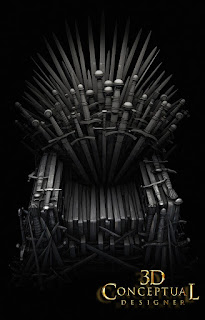 A Bird's Eye down angle on the Throne I made for Season Three Game of Thrones Advertising work. 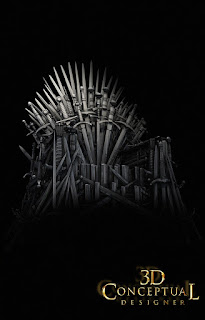 A low ground level shot looking up to the empty chair. 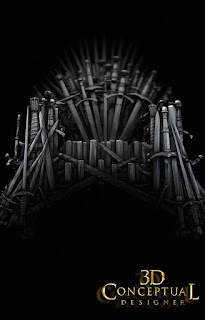 Even lower[ in the floor;hidden] in this view foreshortening the chair back in the Throne. 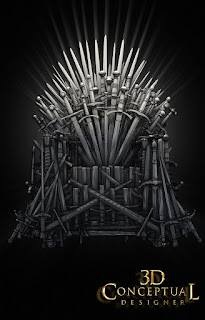 Had to do an iconic front shot. 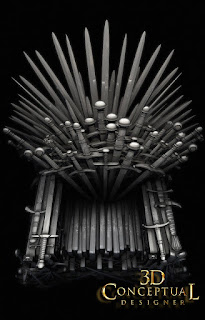 An even more extreme down angle with a 10mmlens to boot. elongated the back as desired and lost the front of the chair for this one. 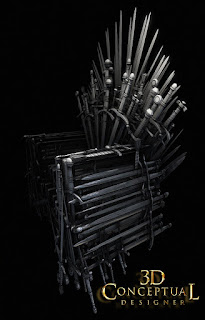 A 3/4 side view on the Throne from Game of Thrones. 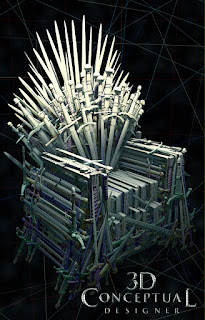 Here is the 3D wire-frames superimposed over a ambient render showing the build out of this file. I hand formed 294 swords to make this throne, less than what is in the series, but enough for the time permitted for this work.


Last season, I created the main crown[ King Richards ] for the advertising for the Season two of Game of Thrones in my prior post on Game of Thrones here, so today I am posting my first post for work that I did for this almost ended Season Three, and this time it was for my client Gravillis Inc.

I was contacted by Gravillis to build out the iconic throne made from swords for the boy king, but as ususal I had one day total to do this[ 8 Hrs. ]

They wanted to use some of the sword designs from the series[ time permitting], so I built out seven particular swords, and had about half a dozen generic ones from the past I clumped in too.

This scene is 100% subdivision quad modeled, but due to time limits I had to render these sans subdivision. I made them all at a medium resolution, and they still held up well.

I rendered out a full set of views with a dark ominous look as directed. A fun job as I am still a big fan of the series myself.

How about that "Red Wedding" this week, WOW!

I will have added posts in the weeks to come for this Season three.