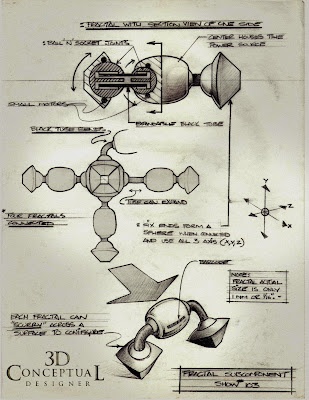 Each small Fractal B.I.O.T connected in a six way joint to form a molecular structure of sorts. 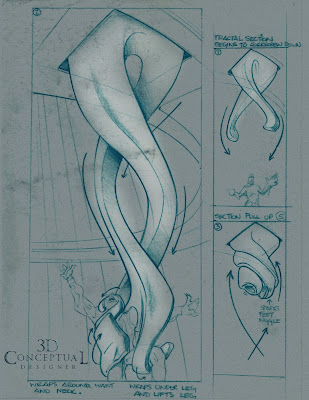 When the Fractals were together in the big "sand pile", they moved in tendrils and large shapes as seen in this VFX diagram for the Animators.

In this nineteenth part in the continuing series on the Phantom 2o4o, the Television Animated Show I was Art Director and Conceptual Design on for a few years back in the early 90's, this focus is on a very different B.I.O.T., a Nano Tech Fractal B.I.O.T.

The rage in the early 90's in CGI was the new Terminator in Terminator 2 that had just come out a year prior as the "liquid Metal" T1000, which they wanted to have that in the show.
Rather than just a straight chrome liquid B.I.O.T, we went with the little fractals that form like a pile of sand. Fractals were just seen in the destroyer in "When the Earth Stood Still", as little fractal insects, here they are building blocks to form 3d objects.

Also how do you design a blob VFX in 2D? I did a few of these storyboard design frames to show the 2D animators in Korea what the shape looked like when it formed, so rather than being a blob mass with no distinguishable form, it actually was more taffy like keeping with the "Tall and Thin" motif of Phantom, as well as reaming a bit squared off to show a better form.
Cheers, THOM
Posted by 3Dconceptualdesigner at 12:10 PM