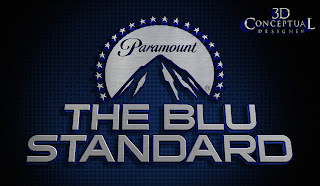 A thin extrusion with the metal plates front and back with a blue glass layer sandwiched between them.

This is an alt on the above file with the camera dropped down and the text extruded back 50x to show a deeper and heavier icon.

This was the scissor move we did for MGFX[ Motion-Graphics] animations where the top Icon and the type spin in opposite directions, and this logo was a still frame from that move.

A version with a very heavy font: Same metal and glass build for all concepts.

A very deep extrusion was added tot he type here and the glass sows off a good amount of refraction artifacts which in motion were very compelling.

A wide format Logo design with the Paramount mountain and Stars tilted at 45 degrees and placed at the end of the type treatment.

Here is a thinner version, one of my personal favorites, though they went 2D in the end.


I ran an in-house 3D Design Department over at the Cimarron Group for about six years from November 2003, to October 2009. I came into Cimarron back in 03' and set up the 3D Design Department to provided 3D Design, and 3D Illustration, and 3D Animation services to the multiple internal divisions. It was like having a set of seven dedicated clients, and I regularly got a quick little half day gig like this one I am posting on today.

Often in the process of designing a logo for a client, each division would ask me to add dimension to the look they had established, and do a pass with a 3D logo and the divisions would come to me to assist in the presentations.

For this posting I did a quick pass at a few concepts that the client had picked out to make dimensional, and I proceeded to do a few versions of each file with a flatter,and a deeper extruded version to see. Four hours of work is a typical 3D Logo base time frame for budgeting, but I do get ultra minis, like the finish for The Expendables, that was about 30 minutes total, but 4's and 8's rule the day for the most part.

All the colors were locked up front, so blue and brushed metal was the choice of the day so I set the files up and rendered thru the various comps and delivered to the Home Entertainment Department. They went 2D in the end for the finish, but it is always fun to experiment with a three dimensional look.